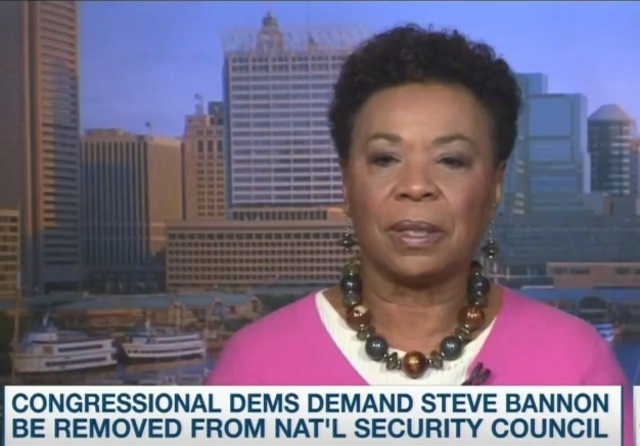 On Al Sharpton’s MSNBC show today, Rep. Barbara Lee of California, a member of the congressional Black and Progressive caucuses, called for the removal of Steve Bannon from his position on the National Security Council, and more generally from his White House on President Trump’s staff.

Lee mentioned that the Black, Progressive, Hispanic and Asian Pacific caucuses had written a letter to President Trump asking for Bannon’s removal from the NSC. But Lee went further, twice stating that they were looking into a “legal mechanism” for the removal of Bannon.

BARBARA LEE: Reverend Al, may I pick up on one appointment of the administration, Steve Bannon? I just want to say how dangerous it is to have — a Nancy Pelosi described him as a white supremacist — sitting on the National Security Council. Members of Congress of the Progressive caucus, Black, Hispanic and Asian Pacific caucus, we sent a letter to President Trump and said that he should be removed from the National Security Council, but also, he should be removed from the White House.

SHARPTON: I’m glad you brought up, though, about Steve Bannon, because twice in Nancy Pelosi, the Minority Leader of the House, twice in her statement she referred to Bannon as a white supremacist. Twice. And I thought that that was very, very, very telling of the attitude of many of his record. And to have him on the NCS, National Security, NSC– correcting myself — is something that is alarming at best. So I’m glad you went there.

What can be done in the congress to really try and force the president to at least remove him from there, if he can’t be removed from the White House, other than a bully pulpit?

LEE: Right now, we are actually looking at legal ways to approach this in terms of the research we’re doing to see if we can find a mechanism to remove him if President Trump does not remove him.

Right now, the public pressure and the street heat, the marches and the protests will help. And the more we expose this man and who he is as a white supremacist, his background, Breitbart News, you know, many of the terrible, dangerous statements that he’s made, and to see those statements now and his views reflected in our foreign policy, it’s dangerous, it’s wrong, it’s serious, and we have to fight every way we can to make sure that he is removed from the NSC and also from the White House.

So, we’re in the process now of trying to determine if we have some legal mechanisms to really remove him, if the president won’t.

The “white supremacist” thing is replacing the racism card. They aren’t getting their way and this is what they have. Time for some slander suits.

notamemberofanyorganizedpolicital in reply to showtime8. | February 6, 2017 at 1:01 pm

Bannon is a lot of things I don’t like/deplore, including a Nationalist/Populist (ask him), but he’s not a “white supremacist”.

This is just loopy.

You know, I was not all that happy about Bannon before, but he seems to be making all of the correct groups froth at the mouth.

Notice the not-so-subtle encouragement of ‘street heat, marches & protests.’ But Trump is the fascist.

How come Lee and Sharpton have to rely on Pelosi to tell them that Bannon is not good? Can’t they analyze the situation for themselves?

They say that Bannon has said terrible things, but why don’t they quote him. They waste many words spouting generalities, but nothing specific to try to convince people. Just “trust me”.

How come Lee and Sharpton have to rely on Pelosi to tell them that Bannon is not good?

She is the mistress of the plantation house. She is wise; what she says must be true.

When you are dumb enough to have to rely on Crazy Pelosi, you are f-ing dumb. The description Fits Lee and Sharpton to a tee.

But not quite as dumb as Obama relying on Hillary Clinton.

If they are quoting someone else it maybe harder to sue for libel.

The Left sees all opposition as “evil”. This justifies any and all firms of response. From reading the above … there are discussions on shades of gray….with the left it is black and white (literally!!!). I still consider progressive thought as a very high functioning autism….. some of it is learned and some susceptibility of thought ….still the underlying is intrinsic brain disorder.

All opposition is evil. It is cultural. On all sides.

“Members of Congress of the Progressive caucus, Black, Hispanic and Asian Pacific caucus (sic)”:
Those special interest groups, at least 4 of which are admittedly racist and all of which strive for the leftist goal of destroying America, can shove it.

Sharpton and Lee are just applying Alinsky’s Rule 11, using their distorted label to ‘freeze and polarize’ Mr. Bannon. Their followers will now make fanatic juju by sticking pins into Bannon dolls and praying for the Devil, or a masked street mob, to take him away as if he were the key log in a logjam, so that the Administration would then collapse.

Sorry, tribal leftists, it’ll be a long four years. Try sacrificing Mr. Sharpton instead, it would be more effective.

there is a legal mechanism she can use:

wait for Trump to leave office in 2024, and hope her party wins the election.

until then, she should STFU, but she won’t.

notamemberofanyorganizedpolicital in reply to redc1c4. | February 6, 2017 at 1:07 pm

There are legal ways to “make them behave.”

SHARPTON: I’m glad you brought up, though, about Steve Bannon, because twice in Nancy Pelosi, the Minority Leader of the House, twice in her statement she referred to Bannon as a white supremacist. Twice. And I thought that that was very, very, very telling of the attitude of many of his record. And to have him on the NCS, National Security, NSC– correcting myself — is something that is alarming at best. So I’m glad you went there.

You should have said some thing that wasn’t believable.

Exactly. They couldn’t find anything to complain about, so they made up a name. Since they are able to call him a name, that is grounds for his removal.

Time to call out the National guard on this “street heat”

I don’t know… if we are all the same, why is diversity so important? This is all so confusing. Next time Al Sharpton runs for some public office, we will have to ask him for a definition.

Democrats are racists. The believe that the content of a person’s character is irrelevant. That what matters is the color of their skin. The haven’t changed much since when they wore white sheets and fought to preserve slavery.

notamemberofanyorganizedpolicital in reply to ConradCA. | February 6, 2017 at 1:09 pm

Your comment reminds me….
Martin Luther King Jr. was a life-long Republican.

I grew up in the Detroit area during the 50s-70s. So…. when I was reading your comment, all I could think of was three white women on stage singing “you keep me hangin’ on….”, “stop in the name of love” and other oldies but goodies… Silly, yes?

When I was looking through a list of songs by the Supremes, there was actually an early one (1961) called “Buttered Popcorn”.

I keep seeing comments that mention getting more popcorn… I’m hungry now. Enjoy the game! I’m going back to binge watching Poldark on my Fire.

There is no legal mechanism that I know of, nor that I can think of, that would be able to “force” a non-confirmation position from the president’s staff.

I suppose that Congress could attempt to cut the Executive Budget with the carrot that the funding would be replaced if Bannon were to leave.

Good luck getting THAT through a Republican controlled Congress until at least after the 2020 elections.

The math right now says that the Democrat members of the Senate are going to get slaughtered in 2018.

I love the smell of desperation. It smells like… victory.

My cat has a higher IQ than that garbage.

Now that his closet-transvestite protector is out of power, will Sharpton finally be indicted for the millions of dollars he owes in tax evasion?

They will go after Sharpton right after they go after Charlie Rangel, shut down Amtrak, defind NEA, and close the Dept. of Education. In short: don’t hold your breath.

defUnd. And furthermore, Trump and his administration are far from stupid. Go after Al, and when he snaps his fingers, cities will burn. Trump will not want that on his watch.

Disagree. The left blew their wad in Berkley.

who cares if leftist cities burn? Break out the popcorn!!!

Correct. Sometimes one can judge a person precisely by their enemies.

It is clear that there is a dichotomy here that needs to be addressed. These two, along with Jesse Jackson, Elijah Cummings, and their ilk, are guilty of “the pot calling the kettle black”, as they are obviously Black Supremacists!

How long must we practice forbearance before realizing our tolerance only emboldens their IN-tolerance? They are the racists here and we need to confront them on it at every opportunity!

Of course, it’s the progressives who are rioting, attacking people and destroying personal property but that’s because everyone else in the UNIVERSE is evil.

I must have missed the effort of the Right to remove any of Obama’s hateful trio of staff – Axelrod, Emmanuel & Jarrett.

Let’s start with getting rid of the Communists and Socialists from Congress. And how are THEY identified? Look at their voting record, and compare it to a resources that rate votes cast against constitutionality of measures; The New American has one (http://www.thenewamerican.com/freedom-index), and if your vote percentages are less than 50% (meaning you vote against the Constitution half the time), you’re out. Vote to finfringe on gun owners rights to keep and bear arms? That’s a strike. Vote to bypass due process? That’s another strike. Vote to send money to any nation? There’s nothing in the Constitution about subsidizing foreign countries, so that’s a strike. And the list goes on …

I was a very reluctant Trump supporter, because my nausea at the thought of Clinton was worse than at the thought of Trump. Since the inauguration, watching the communists and fascist democrats with their slanders, protests, and riots, it is absolutely clear that The United States has the President it needs. I live in the Peoples Socialist Republic of California, and watching these fools agitate and undermine President Trump while breaking the Law and protecting criminals with my tax dollars only strengthens my support for Trump, and my disdain for the SJW’s in charge of this sh*thole that California has become since Moonbeam’s first term in 1975 excepting 1983-1999 with th e administrations of Deukmejian and Wilson.

Sorry, Babs – there ain’t no legal mechanisms to removing Bannon.
Just don’t invite him to your parties. That should stop him! An alternative to violence.

Just think, if we let California Calexit, she’d go with them. Seems like a win. ????