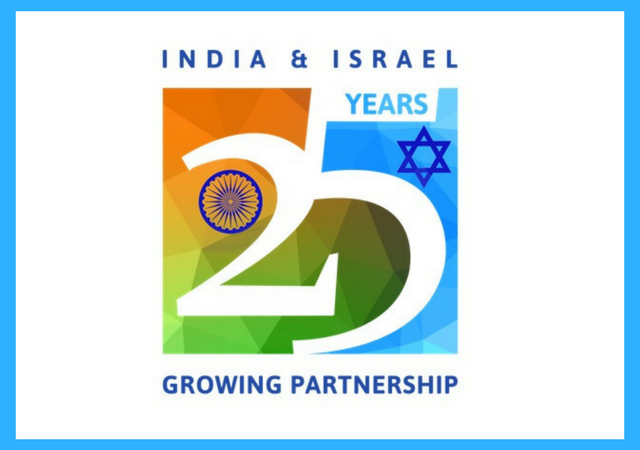 This week, India and Israel celebrate 25 years of bilateral diplomatic ties. On January 29, 1992, foreign ministers from Israel and India signed an agreement establishing diplomatic relations between the two countries. Prime Minister Narendra Modi is expected to visit Jerusalem in June or July to highlight the significance of this growing bilateral relationship, India’s envoy to Israel Ambassador Pavan Kapoor confirmed.

“The time is ripe for our two countries to explore the full potential of commonality and the complementary nature of our respective economies and work in tandem for the mutual benefit of our peoples,” Indian Embassy in Tel Aviv said in a statement marking this occasion.

Twenty-five years ago today, on 29 January 1992, the foreign ministers of Israel and India signed the agreement to establish diplomatic relations between the two countries.

The formal establishment of relations was predicated on the already strong links between the peoples of our two ancient cultures, going back centuries to the Jewish merchants who plied the trade routes to Mumbai, Kochi and the other port cities of India. Today, close to one hundred thousand Israelis boast Indian descent and are just one of the many valuable links between the two countries.

On the occasion of the celebration of 25 years, Ambassador Daniel Carmon said, “As we celebrate this historic day, we have chosen ‘A Growing Partnership’ as the motto for the entire year of 2017 to signify that our relations, and the celebration of these, are not bound to one specific point in time. Our unique relations continue to grow as we speak, and our potential is endless”.

Adding that, “India and Israel are two ancient people, proud of their cultures and respective history, two vibrant democracies, whose peoples are curious and eager to grasp the future. I believe that together, we can shape a better future for Israel, India and the world.”

Agriculture is central to these bilateral ties. Israel’s international development agency MASHAV is working with Indian counterparts to set up 26 Agriculture Technology centres across India by the end this year. Around 15 such centres are already operational.

In a related statement, Israel’s Ministry of Foreign Affairs laid out the vision for bilateral partnership between Israel and India:

Today, the Government of Israel is in the process of finalizing an initiative which will promote and fund programs that will ensure the continued enhancement and expansion of our mutual cooperation. The Government and the Ministry of Foreign Affairs are promoting joint business ventures, agricultural programs, tourism, and other joint projects. The Foreign Ministry will also be spearheading a special program to bring young Indian leaders to Israel, from multiple fields of interest, in order to learn what Israel has to offer and to realize the potential for cooperation and collaboration.

After eight lost years of Obama presidency, President Trump’s tenure offers a new hope to the Israel-India alliance. President Obama’s unwillingness to stand up to Radical Islamic terrorism was viewed with apprehension in both Jerusalem and New Delhi. Israel and India, both countries bearing the brunt of terrorism at the forefront of Islamist Jihad, strengthened their counter-terrorism cooperation as the U.S. under President Obama retreated in the global war against terror.

I continue to be bewildered by the fact that Pakistan was a U.S. ally and India a Soviet ally during the Cold War.

Would love to see negotiations to bring India and the UK into a new, renegotiated version of NAFTA.

That never should have happened, and was entirely due to the influence of the Arabist wing within the State Department in the 50’s and 60’s. (their greatest triumph was the support of Egypt and humiliation of Great Britain in 1957)

India had always wanted a relationship with the United States – the Arabists said no, we need to support Pakistan, and they told India to go pound sand when they asked for military aid. So OF COURSE the Soviets jumped at the opportunity to get an ally in the region. But all of that only happened AFTER we had screwed up the relationship beyond repair.

The mmuuusssllliiimmmss have been messing up the World for quite some time.

Hopefully one day a real economical energy alternative will happen.

Hopefully soon, cause people and governments are so easily manipulated with $$$$.