Alan Colmes Passes Away at 66

Alan Colmes Passes Away at 66

He died suddenly after a brief illness 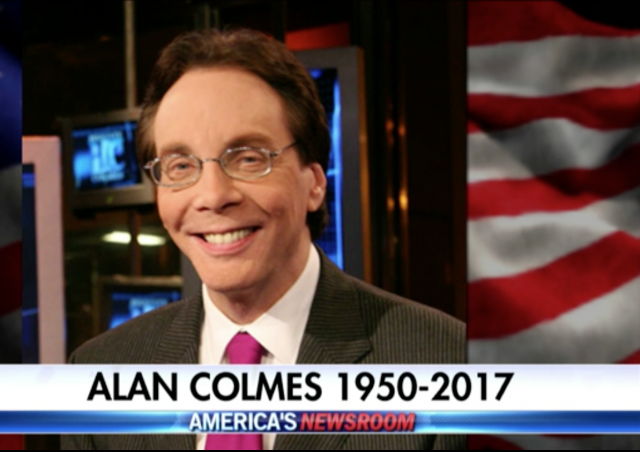 This is truly tragic. Long time Fox News guest and former co-host of “Hannity & Colmes” passed away after a “brief illness”.

Fox News Channel’s Alan Colmes has passed away at age 66 after a brief illness.

Colmes leaves behind his wife, Jocelyn Crowley, who issued the following statement:

Alan Colmes passed away this morning after a brief illness. He was 66-years-old. He leaves his adoring and devoted wife, Jocelyn Elise Crowley. He was a great guy, brilliant, hysterical, and moral. He was fiercely loyal, and the only thing he loved more than his work was his life with Jocelyn. He will be missed. The family has asked for privacy during this very difficult time.

Bill Hemmer announced the sad news this morning on “America’s Newsroom,” which then aired a tribute package from Fox News Channel host Sean Hannity, his former co-host on “Hannity & Colmes.”

In a statement this morning, Hannity called Alan Colmes “one of life’s most decent, kind and wonderful people you’d ever want to meet.”

” Alan Colmes is the only television host who took the time to reach out to me to tell me he was not thrilled with my criticism of him in a Legal Insurrection blog post. I was thrilled that he read us . But he did it with great humor and we corresponded several times after that. We did not have cable TV until around 2001 or 2002, and watching Hannity & Colmes was one of my first introductions to the cable news mayhem. I will miss him.”

Our prayers are with the Colmes family.

Alan Colmes made an unfair comment about me on Twitter once. I called him out on it and he apologized very graciously. Quite a gentleman.