It seems like a million years ago give the fast flow of news cycles, but you may recall that a lone unidentified Judge on the 9th Circuit Court of Appeals called for a vote by the full court as to whether to hear en banc the government’s emergency motion for a stay pending appeal.

That motion had been denied by a three-judge panel, which refused even to narrow the sweeping District Court injunction against the immigration Executive Order.

Since then, Trump has made clear that there will be a new Executive Order issued next week meant to address judicial rulings against the prior Executive Order. Apparently there also were similar representations to the Court in a supplemental brief:

In other circumstances, the panel’s multiple errors in sustaining a substantially overbroad injunction, and thereby prohibiting enforcement of a lawful Executive Order designed to protect the Nation’s security, would warrant en banc review by this Court on
the merits. See Fed. R. App. P. 35(a)(2). In light of the forthcoming promulgation of a new superseding Executive Order, however, such review is not called for at this time. Rather, the proper course in these unique circumstances, which have involved highly expedited preliminary consideration and limited briefing of detailed issues concerning an Executive Order whose scope was misapprehended, would be simply to vacate the panel’s opinion when the new Order is promulgated. Cf. Circuit Advisory Committee Note Rules 35-1 to 35-3 (specifying that panel’s decision is no longer precedential when rehearing en banc is granted). To facilitate that result, the government will promptly file with the Court the new Order as soon as it has been issued. 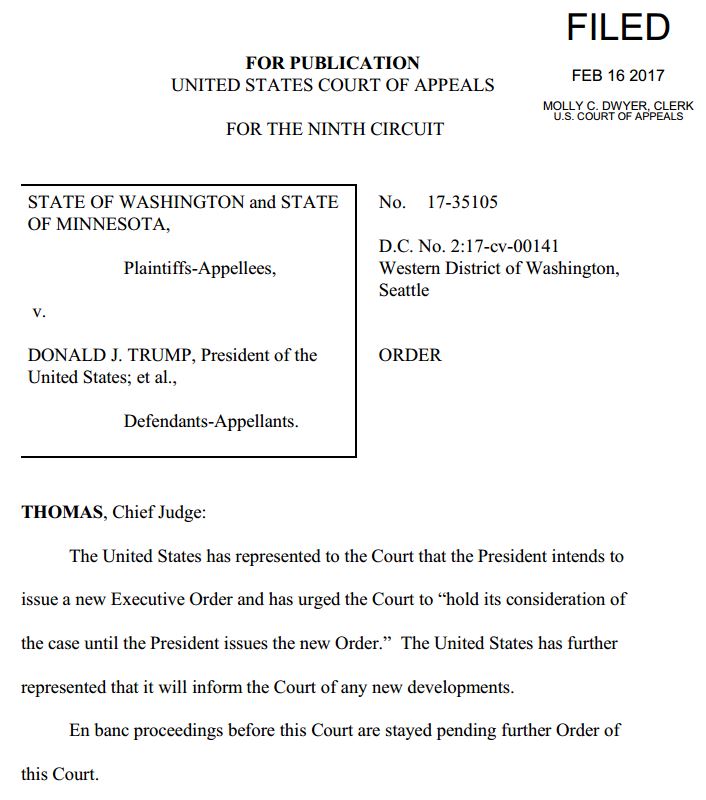 Also, there is a doctrine of “voluntary cessation” under which voluntarily stopping illegal conduct doesn’t necessarily moot the case, where the conduct is likely to recur.

So, proceedings aren’t necessarily done before the 9th Circuit or Judge Robart.

RE: “Also, there is a doctrine of “voluntary cessation” under which voluntarily stopping illegal conduct doesn’t necessarily moot the case, where the conduct is likely to recur.”

Things that make you go “Hmmmmm…….”

I suspect that the full 9th circuit really, really, didn’t want to be pulled into having to opine on this, and so they jumped at the first chance they saw which could get them off the hook.

They aren’t off the hook at all.
In fact, it has just become substantially worse for them as they will just about have to fight the new E.O. in order to avoid reversing themselves.

This is a mistake. He should have forced them to defend this indefensible shitburger of an ‘opinion’.

Force them out into the open where there bullshit is on full display.

I’m going to both agree and disagree with your position here. Yes, the Trump administration *should* have proceeded to hammer the clearly wrong decision into the ground, put a tombstone on it, and laid flowers.

While doing that, every terrorist organization who hopes to slip their operatives into the country would have been doing so as fast as they could have.

Instead, the administration is releasing a much more thought out and limited EO, most probably with a full script of ‘counters’ for every objection against it, such as “If objection A is raised, use settled case law A1, B4, and C7 as arguments. If objection B is raised….”

We may be forced to hold the door open, but the sooner we can get it closed, the better. Plus, rattled terrorists attempting to slip into the country ahead of schedule in order to beat the EO have a higher probability of screwing up and getting caught.

notamemberofanyorganizedpolicital in reply to georgfelis. | February 17, 2017 at 8:05 pm

Finally, hopefully they’ve managed to find some attorneys who will zealously defend the case.

Anyone would be an improvement over the half-witted dipstick the DOJ sent for the previous argument.

The fun part is….. they still have to defend it.

While I would probably not gone this route, I can see why the administration would.

What the administration is banking on is that the court will issue a TRO on the new EO, for exactly or nearly, the same reasons. This will strengthen the case that the TRO had no legal basis but was wholly a political act. Then it is high noon in the appellate courts.

See, at this point, the courts can not win and Trump can not lose.

I think you’ve figured it out.

Trump is famous for saying he always “plans at least 2 ways to win,” in studying things out.

I know a dozen of legit aliens who are crapping their pants about Trump and immigration and whether their visas will be honored. I’m no fan of tech companies bringing in cheap labor and driving down wages locally (while simultaneously complaining about not enough engineers).

I’m pretty sure the bad guys are getting the memo that our borders will not be porous for much longer. I also doubt they want to be forced into an error of getting snagged now.

H-1B visa holders had better make plans for employment back in their home country. Use of H-1B visas are all right, when there is a shortfall of qualified citizens to do a particular job. However, when H-1B visas are being used to bring in foreign workers to displace domestic workers at a reduced wage and benefit package, this hardly corresponds to the administration’s America First mandate. Look for the number of H-1B visas issued to decline and the number renewed restricted.

There wouldn’t be a shortfall if our schools weren’t a POS and we didn’t have affirmative action college admissions.

Since nothing in his EO was unconstitutional, he should pull an Obama and keep going ahead full steam.

JackRussellTerrierist in reply to buckeyeminuteman. | February 18, 2017 at 5:29 pm

Yep. Then when caught, he can just say, “Oops! It’s just a mistake, a misunderstanding – didn’t know the department hadn’t stopped. We’ll take care of it.” Eventually. When threatened with jail.

Maybe this is just the 9th DCA getting some payback against the 5th DCA for ruling against obastard’s illegal immigration free-for-all DAPA gambit. And that doesn’t even get into the 9th despising the SCOTUS for dumping so many of their decisions.

Well, you know, I am certain he had to consider that as an option.
And though it may have been workable, it may well have been very short-lived.
I expect that he decided judgement dictated placing the real value of a well planned long-game, for a solid and clear victory.
Thus avoiding further foolishness.

I hope the new EO makes the ban indefinite “until further notice”.

I am glad we can forge ahead WITHOUT letting them off the hook.
The harm they may have incited must be dealt with.
I watched Trump today, and he noted that the 9th Circuit
Didn’t even cite the Statute in their ruling.