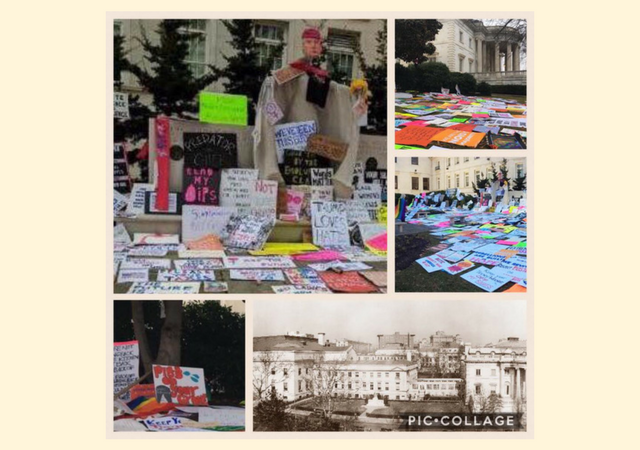 Saturday’s Women’s March left behind some not so stunning images. From signs dumped all over the D.C. metro area (taxpayer dollars are required to clean those up), children forced to carry politically charged placards and even the desecration of the Daughters of the American Revolution Founders Memorial.

In a past life when I had time to spare, I attended DAR meetings. These are lovely people. They care about their communities, volunteer in a variety of capacities, and are committed to preserving founding principles. They’re also apolitical and welcome women of any political persuasion.

Sadly, women from Saturday’s March desecrated the DAR Founder’s Memorial, not just by leaving various unrelated signs, a Trump shrine, but also with blue paint, and destruction of the complex’s landscaping. Somehow this is supposed to send a message to Trump…

In any case, Britt Dorr Elwell, a member of the D.C. DAR chapter, photographed the damage to their founder’s memorial and posted the following to Facebook:

It takes more than donning a vulgar hat, cheering at the sight of pink cabin lights on your Southwest flight and carrying a cheap poster board to convince me you’re a champion for women’s rights. I’ve been a member of two of the oldest non-partisan women’s organizations in our nation since soon after college graduation. I’ve sat on committees, lobbied at the State House, held numerous board positions, supported our wounded veterans, collected clothing for foster kids, sold pins to support schools in Appalachia, fought for the girls being sexually trafficked in our own towns, donated kids books to combat illiteracy, empowered the abused women and children in our shelters, sold cookbooks to fund childhood obesity campaigns, packed supplies for our homeless, the list goes on…

My advice to all of you gals who feel so marginalized in this great nation is simple…pay it forward. JOIN an organization that is (gasp!) non-political in nature, but simply exists for the sole purpose of doing incredible things on behalf of women and children. Through these organizations I’ve had the privilege of working alongside Republicans, Democrats, black women, white women, career women and stay-at-home moms and guess what? We’ve made a significant impact in our own communities and dare I say, yours as well?

Some of you left behind these charming posters in “tribute” or “protest” and in doing so desecrated our Founders Memorial at our headquarters in DC. Ironically, the largest building complex privately built, owned, operated and maintained entirely by women in the world. The ladies who volunteer of their personal funds and time to care for our great hall will MARCH out today to clean up your mess. A minor inconvenience, really, as the proud ladies of the DAR have pledged to contribute a minimum of 19 million service hours and $25,000,000 to our endowment fund over the next 2 years. ????????

Here are two videos that can be found on YouTube, one is a live feed of the desecration in progress and another describing the reasoning behind the protest on our grounds. Blue paint has also marred our monument, but they are attempting to make it shine again. Make no mistake, using our beloved Founder’s Memorial as an “effigy” is not furthering the mission for women’s rights. It may surprise you that some Daughters did in fact participate in the women’s march, some who I consider personal friends. Some who like myself, attend our weeklong Continental Congress each summer and take part in the solemn ceremony of laying wreaths at this statue in honor of the women who came before us. You see we are a non-political group of female VOLUNTEERS not activists. Perhaps we’ve been able to accomplish so much good over the past 125 years because our founding daughters had the sense to leave politics at the door? Or in this case specifically, off of our lawn, off of our bushes and off of our lovely statues.

The videos Elwell referenced are here:

Destruction of private property is so funny!

The ignorance is astounding though sadly unsurprising.

Despite the reports and the eyewitness account of Mrs. Elwell, our correspondence with DAR indicated there was no damage to shrubs or paint on the Founders Memorial:

I’m happy to report that our DAR Headquarters Building is just fine. There was no physical damage to our building or property and the signs were cleared relatively quickly the next morning. There was no additional cost incurred as a result and everything was back to normal by Sunday morning.

We’re not sure how this squares with other accounts, but we’ll take their word for it.

Imagine all the kilotons upon kilotons of carbon spewed into the atmosphere to haul all that rabble to-n-fro for their immature screaming fit in DC.

It’s almost as if they know that ‘climate change’ is a hoax, too.

Having a uterus doesn’t give you any kind of moral authority. Pretending that it does just makes you look small, petty and more than slightly unhinged.

Uh… I kinda like small ones that I can pet.

Give credit to the pigs for being consistent with past democratic progressive groups.

The mall has been left in shambles by Earth Day attendees, the two Obama inaugurals and just about every occasion these piggy types get together.

Just another reason they hate the Tea Party and others like them who pick up their own garbage and leave the mall a better place.

Dear Merlin, please do not besmirch the name of the noble bacon provider. Pigs give their lives for my breakfast.

Color me shocked. Shocked, I say.

I really didn’t expect Hillary’s girlies to be civil. If all you have going for you is a vagina, you are pretty screwy. There were so awful vagina holders in the pictures too. shiver…shiver!

Be nice if there was a law that could be applied to Ron Webber for directing people to put their trash at the memorial.
Maybe sentence him to half a year on a highway trash crew. And direct people to toss trash a 100 feet in front of him as he’s serving his sentence.

Can’t he be charged for littering?

Isn’t the DAR Hall where they film Jeopardy once per year?

DAR Constitution Hall is a public venue to see concerts and other public shows in DC.

I believe that is where the shrine is.

No knowledge of history, of those who paid the high price of suffrage to enable them to reduce themselves to female genitalia references.

The leftists are poisonous. Toxic. Brainwashers.

Most of these Women’s Marchers will go home and tell their tales of brave opposition to friends over wine and cheese for a few weeks and that’ll be the end of it.

And they wonder why all of their
“righteous indignation”makes no
impression except for lip-curling disgust.

So you’ve all really elevated the conversation here, I see. Why not spend all this righteous indignation trying to make this country a better place? Or to understand what a threat it’s really facing? You do realize that hundreds of thousands of women – and men – marched peacefully on Saturday to protest the threat to our democracy? And some paint and signs left behind at one location is all you can find to whine about? Face it, you’re on the wrong side of history. My ancestors fought in the Revolutionary War (and every succeeding one) to help guarantee your right to free speech, though, so I guess it’s all OK.

The destruction of private property as a means of protest is never peaceful and always criminal at some level! I know if it was my property they were destroying, it would not be peaceful. The women of the DAR KNOW the dangers of anarchy which is exactly what these marches represent. The DAR is NOT on the wrong side for opposing the destruction of their private property just to make a political statement. I’ll bet that the people who caused that damage will never admit to it or publically announce where they live because they know it is a criminal act that they committed and if they admitted to taking part, they could be arrested and jailed. IOW, these people are cowards! Anyone who supported the march and the destruction of property that the marchers committed is already on the wrong side, not the women of the DAR. The real danger to this country is not the DAR or the Republicans or the Democrats or Trump or some liberals who would not ever support a march that causes destruction of private property. The real danger is the progressive ultra liberal mindset that has no real understanding of U. S. Constitution and reasons through their incredible ignorance that it is OK to march/riot/cause destruction as an act of free speech to make their political point.

This is fake news. The signs were left outside of Trump hotel, neatly arranged as shown in the pictures, as a message. This easily verified from multiple sources on the web, including Snopes.com
As far the paint damage, I personally called the DAR and they confirmed that this is not true. This is FAKE news.