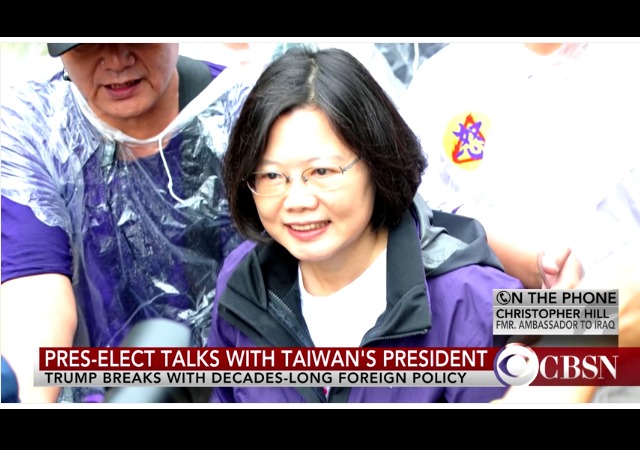 Tsai Ing-wen, president of Taiwan, will make transit stops in the United States when she heads to the Americas, but will not receive a visit from President-elect Donald Trump or from anyone on his transition team:

Trump transition spokeswoman Jessica Ditto said in an email Saturday that the president-elect would not be meeting with the Taiwanese leader while she is in the U.S., nor will members of his transition team.

Trump sounded unaware of the potential trip when he was asked about it on New Year’s Eve.

“Nobody’s ever mentioned that to me,” he told reporters. “I’m not meeting with anybody until after Jan. 20, because it’s a little bit inappropriate from a protocol standpoint. But we’ll see.”

In early December, Trump caused some rumbles in the force when he spoke with Tsai on the phone, “the first time a president or president-elect has spoken with the leader of Taiwan since Washington established diplomatic ties with Beijing in 1979.” China threw a hissy fit and lodged a protest with Washington.

But Tasi might keep a low profile on her trip “to avoid further inflaming tensions with China, which has been angered by her refusal to endorse Beijing’s concept that Taiwan and the mainland are part of a single Chinese nation.” See, China cannot handle the fact that the island wants freedom and independence:

China already passed an aircraft carrier through waters near Taiwan in the last two weeks, and the government in Taipei suspects Beijing last month paid the African island nation of Sao Tome and Principe to recognize China instead of Taiwan. Both moves came after Tsai telephoned Trump on Dec. 2.

China might respond to the trip with more military displays or by offering aid money to win over the Central American countries Tsai hopes to impress on her trip, some argue. China does not allow its diplomatic allies to have separate, formal ties with Taiwan.

Political analyst Liao Da-chi said that “China cares most about is whether Tsai and Trump will meet.” Beijing even asked the government “to bar Tasi from flying through US airspace.”

Taking a congratulatory phone call is one thing; a face-to-face meeting is another.

China’s land-grabs in the Pacific are monumentally dangerous for future global stability and must be countered. You either do it diplomatically with things like meeting with Taiwan, or you do it an even more dangerous way–militarily. One way or another, they will have to be dealt with. They have had almost 16 years of “getting their way” with no real repercussions. The longer we wait, the more dangerous it will become. It may already have gone too far to deal with peacefully.

China is setting the stage, so there’s no use in them getting upset if we walk out onto that stage and put on a show. Brinkmanship is most dangerous, but most often, necessary:

“The supreme art of war is to subdue the enemy without fighting.”
—-Sun Tzu

He can do it when he’s President.

His first priority will probably be to avoid the seemingly progressive slope to a global war fomented by the Obama administration, Democrat special interests, and a few maverick Republicans.

Far too many people (and countries) are much too comfortable with the current world situation, deteriorated though it is. Trump’s already thrown a wrench into those gears. I don’t begrudge him a few days or weeks to see how that shakes out before he throws another—and maybe bigger—one.

He limits his options if he lets China or Taiwan—or the Dems or the Press—force him to show his cards.

In any case, the looming crises with China involve the grossly overheated Chinese economy—nothing much the US can do about that, except duck under cover—and China’s naughty client state, North Korea. I’d guess both of those will turn into major headaches long before Taiwan does.

We as a nation would benefit from policy that would engage all countries and not fall victim to any ploy that would allow other countries to dictate to us.