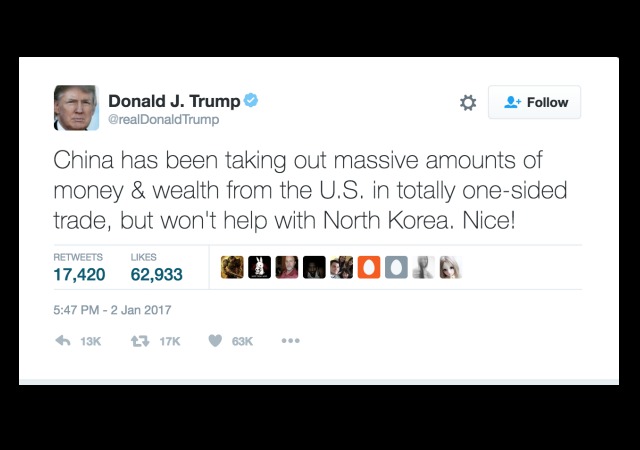 The Korean government is still in the process of building ties with Trump and does not have a lot of insight into his foreign policies – like most of the world. His 140-character posts are currently the most effective insight into policies of the incoming administration.

On Monday, Trump posted on Twitter: “North Korea just stated that it is in the final stages of developing a nuclear weapon capable of reaching parts of the U.S. It won’t happen!”

He called out China on the same day, tweeting: “China has been taking out massive amounts of money & wealth from the U.S. in totally one-sided trade, but won’t help with North Korea. Nice!”

In the past, statements by Washington on key policies would involve the Korean Embassy in Washington writing a report to send back to Seoul.

These days, Seoul was able to learn of Trump’s take on North Korea immediately and directly via Twitter.

Analysts tentatively suggest that Trump’s tweets suggest that North Korea will be a key national security issue for his administration – along with Beijing’s role in reining Pyongyang in.

Korean Foreign Minister Yun Byung-se himself does not use Twitter, but any key policy issues tweeted by Trump are reported to him right away.

The Korean Ministry of Foreign Affairs welcomed Trump’s Monday tweet about North Korea, interpreting the message as a “clear warning” by the president-elect to North Korea on its nuclear and missile provocations.

“President-elect Trump’s Twitter message is his first time explicitly mentioning the North Korea nuclear issue Since he was elected, which makes it significant,” said South Korean Foreign Ministry spokesman Cho June-hyuck in a briefing Tuesday, “and can be interpreted as a clear warning about Kim Jong-un’s New Year address on ICBM and the possibility of provocations.”