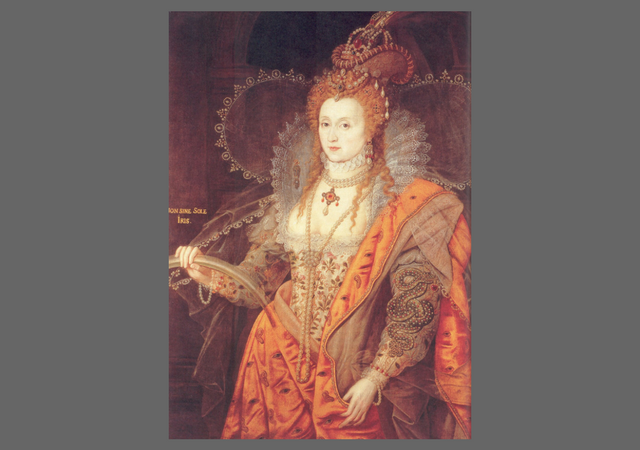 A long lost skirt belonging to Queen Elizabeth I was found in a Herefordshire church. It had been cut up and used as an altar cloth.

It’s believed to be the only surviving piece of clothing from Queen Elizabeth I’s wardrobe.

The Telegraph has the story:

A piece of fabric described as the Holy Grail of fashion history will become one of the star attractions at Hampton Court Palace after it was identified as the only surviving piece of clothing worn by Elizabeth I.

The country’s leading experts on royal garments have spent the past year piecing together clues about the provenance of the beautifully embroidered textile, which had been cut up and used for hundreds of years as an altar cloth in a Herefordshire parish church.

They say all the evidence points to it having once been a skirt worn by the Tudor queen, making it the only known survivor of her famously lavish wardrobe.

She said: “When I saw it for the first time I knew immediately that it was something special. As I examined it, I felt as though I had found the Holy Grail, the Mona Lisa of fashion. None of Elizabeth I’s dresses are known to have survived, but everything we have learnt since then points to it being worn by Elizabeth.”

The botanical pattern on the cloth bears a striking resemblance to that on a bodice worn by Elizabeth in the so-called Rainbow Portrait of 1602 and Ms Lynn believes it is “not inconceivable” that the skirt, which cannot be seen in the painting, is part of the same outfit.

Well, Bill Clinton donated his old underwear to charity, so it makes sense That QE1 donated her dress to the church.