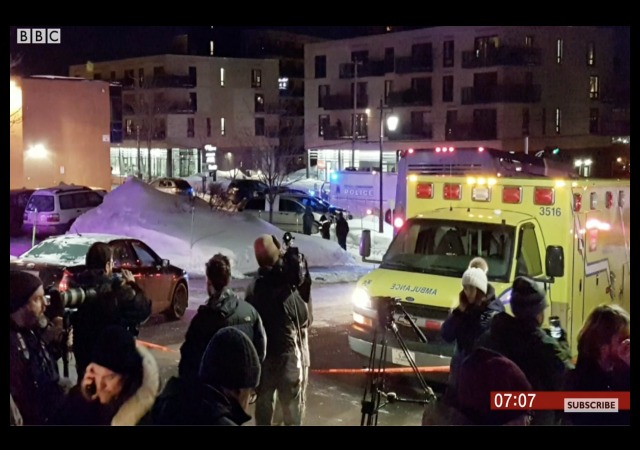 “It was with tremendous shock, sadness and anger that I heard of this evening’s tragic and fatal shooting at the Centre culturel islamique de Quebec located in the Ste-Foy neighborhood of the city of Quebec,” Trudeau said in a statement. “Muslim-Canadians are an important part of our national fabric, and these senseless acts have no place in our communities, cities and country.”

Philippe Couillard, the premier of Quebec, called it a terrorist attack.

Translation: Quebec categorically rejects this barabaric violence. We stand in solidarity with the families of the victims, the injured, and their families.

Christine Colombe, a spokeswoman for the Quebec Provincial Police, said the victims ranged in age from 35 to 70 and said that 39 people who were in the mosque were not hurt.

The police had not yet identified a motive in the shootings, saying the investigation was just beginning. Ms. Colombe said that one of the two suspects was arrested at the scene of the shooting, while another was apprehended nearby on Île d’Orleans.

The police said that some of those wounded in the shooting were seriously hurt.

Sources told Radio Canada that the shooters attended Laval University and one is Moroccan. Police have not confirmed this information, though. The university said if there is a connection, then its officials will help as much as possible.

Police have said that one of the suspects phoned 911 “indicating he wanted to co-operate with authorities.”

Turns out immediate media reports identified the wrong man. White nationalist Alexandre Bissonette attacked the mosque. Media reported that a Moroccan Muslim also attacked, but it turns out he called 911 for help.

The actual shooting suspect is 27-year-old Alexandre Bissonnette, a white French Canadian who is, by all appearances, a rabid anti-immigrant nationalist. A leader of a local immigration rights groups, François Deschamps, told a local paper he recognized his photo as an anti-immigrant far-right “troll” who has been hostile to the group online.

The Globe and Mail added that he “was known in the city’s activist circles as a right-wing troll who frequently took anti-foreigner and anti-feminist positions and stood up for U.S. President Donald Trump.” And Bisonnette’s Facebook page – now taken down but still archived – lists among its “likes” the far right French nationalist Marine Le Pen, Islam critics Richard Dawkins and Christopher Hitchens, the Israeli Defense Forces, and Donald J. Trump (he also “likes” the liberal Canadian Party NDP along with more neutral “likes” such as Tom Hanks, the Sopranos and Katy Perry).

The shooting occurred at 8PM on Sunday night “when between 50 and 200 worshippers were in the building” for evening prayers.

“one of the gunmen shouted “Allahu akbar!” as they both opened fire on the mosque”

Not that this had anything to do with Islam.

Apparently, some folks were upset that the mosque was too moderate.

Has EX-president Obama come out of hiding to address this yet?

Withholding identities says a lot about those actual identities. If they clearly fit the mold for all of the current memes (e.g. racist, anti-Muslim, etc.), we would know everything about them already and would have details about their lives since childbirth, practically.

A Canadian friend on Facebook spent an entire 12 hours or so lecturing me about President Trump’s immigration order. According to her, the Canadians have taken over 38K refugees from those countries this year without a single incident . . .

Something tells me she spoke too soon.

Just how many “honor killings” has your friend missed in the news?

Something tells me the CBC wouldn’t be covering those.

The point may be that the immigrants don’t post a threat to “us” but only to “them.” The Chicago analogy works here. Once you create a nearly infinite spectrum of groups or identities you can conveniently find the one that fits your pre-set narrative. In Chicago, most progressives go more granular than just race and find other “identities” to bring their story line back to how bad America is. (poverty, institutional racism, etc.).

I suspect Canadian progressives do the same with immigrants who commit violence. Wait for it, but if it turns out to be Muslim on Muslim violence we will probably be flooded with why Canadian culture is a big factor, etc.

Police have said that one of the suspects phoned 911 “indicating he wanted to co-operate with authorities.”

Apparently, one of the suspects was apprehended at the mosque. The other called police regretting what he had done, threatening suicide.

I guess those evil Lutherans are at it again,

You need to keep an eye on those dastardly Amish/SARC

Muslims can’t live in peace with ANYONE.

The two have been identified by name as Alexandre Bissonnette and Mohamed Khadir. But if there were any doubt of trying to connect any obscure dots to the US and Trump, check out this line by the newspaper:

“The shooting came as protests erupted across the US in response to President Donald Trump’s immigration ban against seven Muslim-majority countries which Canadian Prime Minister Justin Trudeau condemned earlier on Sunday.”

See? They MIGHT be connected so let’s just go ahead and make inferences and try and connect them. Retractions will not be forthcoming…..

So, how are the people who already declared that this is Trump’s fault going to spin this?

Color me NOT surprised. One December, when I lived in Montreal, we were headed home on the bus to the Park Jarry metro station. The bus was delayed because there was a stabbing at the Mosque across from the station. Muslim vs. Muslim about whether Islam allows Christmas lights….

Muslims keep playing Charlie Brown kicks the football with the media over the “peaceful” characterization.

Does anyone really give a flying fig about Muslims killing Muslims?!

People being gunned down in our cities because of stupid policies? Yes we care. Do you know how far a missed 7.62x39mm is still lethal? Does rule of law not matter?

Muslim-Canadians are an important part of our national fabric

Only to the extent that the Canadians want to pretend that they’re French. Since France is having problems with its Muslim invaders, Canada wants some, too.

JT is Canada’s Obama – Anti-patriotic and destructively xenophillic, with no room left in his head after his narssism and progressive pablums.

Sadly, it is a dream come true for the left who now have a poster boy to display who will be waved around when ever someone speaks about islamic redicals.

As usual Ms Chastain you cannot help but show what a liar you are. You and the rest were giddy about a non white Muslim being responsible. Since yesterday it was reported that a white terrorist named Alexandre Bisonette did it. Now that you and the rest took a BIG L,you want to say the initial liberal media. Now that we know a pro Trump white terrorist is responsible,where are the equal amount of comments.

After all this is about telling the truth right?