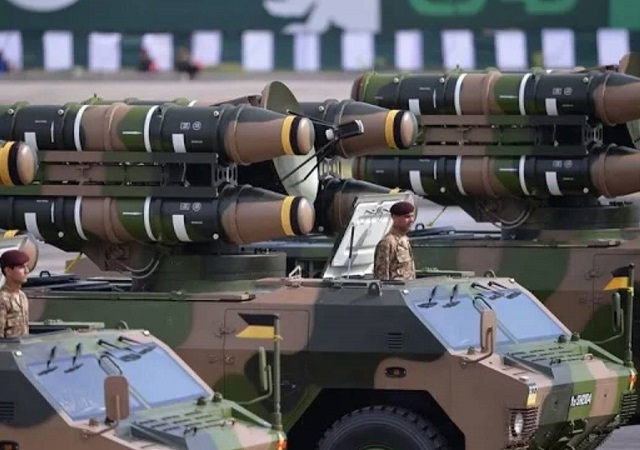 Saudi Arabia is pushing ahead with its plans of creating an international Islamic army. Saudi-led Islamic Military Alliance (IMA) comprises of 39 Sunni Muslim states including nuclear-armed Pakistan. According to a report published this week by the British newspaper Guardian, former Pakistan army chief Raheel Sharif has been tapped to become the first commander of this “Muslim Nato”.

Saudi-led Islamic army is not backed by Iran, which is busy building a rival Muslim block by financing and arming standing armies and terrorist militias in Shia-majority countries and regions.

The declared aim of this military alliance is to fight terrorism. Ironically, its leading member states are direct sponsors of Jihadi terrorism across the world. Pakistan’s military actively nurtures and sponsors Islamic terrorist groups operating against Hindu-majority India, along with its long-standing ties with Taliban in Afghanistan. Gulf Arab States and Turkey have supported and funded Islamic State (ISIS) at one time or another.

British newspaper The Guardian reported the creation of the joint military structure with the command centre in Riyadh, Saudi Arabia:

The Pakistani defence minister, Khawaja Asif, revealed on television that Sharif would become the first commander-in-chief of the Islamic Military Alliance to Fight Terrorism (IMAFT), a proposed coalition of 39 countries that will have its headquarters in the Saudi capital, Riyadh.

The military build-up is the latest phase in a thirteen-hundred-year-old Shia-Sunni rivalry that began in the 7th century soon after the death of Mohammad, the founder of Islam. The Shia-Sunni conflict did not arise out of pure theological or spiritual differences but started as a tribal feud over the control of the conquered territory and war-booty left behind by Islam’s founder.

Remember President Obama and other liberals repeating the claim that “Islamic fundamentalists kills more Muslims than non-Muslims”? Well, they are simply talking about an inner-Islamic feud gone full-Jihad. With hardly any Christians, Jews, Yezidis and other soft targets left in the Muslim Middle East to wage Jihad on, Shia and Sunni factions are once again turning on each other.

Unlike Christianity or Buddhism, the founder of Islam, Mohammad, created an earthly empire in his own lifetime, laying down not only the concept of carnal rewards in the afterlife but also an imperialist blueprint for a conquest of neighbouring lands and subjugation of non-believers. The Islamic calendar does not start with the birth or the enlightenment of its founder, but when he acquired political power by migrating from the town of Mecca to Medina. As mass migration takes place from Arab and Muslim lands into Christian Europe, ‘conquest by migration’ is a conscious motivation for many followers of Islam.

If post-modern Europe has lost its sense of purpose and history, many in Muslim World have neither put aside their tribal squabbles nor given up on the dreams of world domination rooted in their theology — shared fervently by both Islamic State (Sunni) and Islamic Republic of Iran (Shia).

Iran’s Ayatollah Khomeini once said, “Islam is politics or it is nothing.” Today, Jihad and mass migration are continuations of the very politics by other means — with Western liberals serving as unwitting allies.

Saudi Arabia and Iran are currently involved in 4 proxy wars. And, if Iran decides to launch her future nukes at Israel, they will probably fall on Jeddah as well.

And to think the US has supported each side.
Sad!

Also, look for some future announcement that the Saudis are allowing Pakistan to stage nuclear weapon in their country. The Saudis paid for much of the development of those nukes. And, there has long been speculation that they actually own a number of nuclear weapons currently stored in Pakistan.

It is correct that Islam is a religion of war; but it is also important to remember that no Muslim army has defeated a non-muslim army in 4 or 5 centuries now. (I exempt Algeria in the 50’s because that is best viewed as the final phase of the post WW2 anti-colonial movement, and was nationalistic in its focus, not religious)

To understand why, compare the standard Islamic fighter to one of the classic warrior nations, Imperial Japan. (I do not endorse their morality, but the ferocity of their soldiers is legendary)
The height of a Japanese warriors morality was duty to his Emperor and to his country, referred to as Bushido. Living up to this code of honor was more important to the Japanese warrior than his own life, and he was taught from the beginning to die for both his own honor and the honor of his Nation.

Western culture also has the concept of honor, although in current days it is not nearly so strong. Still, our literature and our stories of heroes are filled with those who died for their own honor, who died because death was preferred to them violating their own internal code.

Islam, on the other hand, has no analogue to this value. Islam mandates obedience to the prophet, but explicitly disallows personal decisions of morality or ethics – one does only what one is commanded to do, and the outcome is decided by Allah. In the most extreme form of Islam (wahhabism, and shia) all is preordained, and men merely play out their roles, they do not decide them. What this means, in practice, is that while individual fighters may show great ferocity, it is all based on emotion and the bloodlust of them moment, rather than on any sense of duty. Whatever happens will happen, as Allah has willed it. This is why Arab armies are notorious for breaking and running as soon as a battle turns against them. Once it appears that Allah has willed a defeat, no Arab soldier will stand and fight, unless he’s trapped.

A warrior who believes in the honor of his cause and who has his own personal code of honor will stand and fight to the death, no matter how bad things look. That is the strength of western armies, that was the strength of the Imperial Japanese Army.

A warrior who believes that Allah has preordained all battles will be ferocious as long as he is winning, since he believes Allah is on his side, but will break and run as soon as things take a bad turn, since Allah must have pre-ordained a defeat.

That’s why no Arab army has defeated a non-arab army in many, many centuries. They’re good at killing women and children and villagers without many weapons (such as in the Sudan), but that’s about it.

1- Arab vs. Muslim – you mix the two terms – how does that influence your thinking? Eg there is not an imminent island / peninsular war in Asia between equals (Eg Malaysia and Indonesia’s threats) that would allow a non-Arab discussion but was curious

2- Turkey, WW I – Turkey was on the losing side but defeated the British (stalemated perhaps) under Kemal. While he was secular in the gov’t established the Ottoman Empire was not. Where does that rank in your analysis? Qualified as a campaign to me, not a war, but it’s an interesting bit of history (and I have read and toured the battle sites so I kinda like the topic) – and Turkmenish not Arab, which matters to those in that part of the world but perhaps not to a cultural analysis

3- war is also defined by economy. The same cultural factors inhibit economies, but except for the Arab – Israeli wars have you thought about the relative economic strengths being as much a factor as warrior mentality?

Same root cultural issues, but economy is destiny too which is why a free and strong US economy is critical to national defense (and why global warming nonsense is so injurious to it)

Just tossing ideas out here for fun at lunch hour, nothing more !

1) The reason I do not use Arab and Muslim interchangeably is because of the Persians (modern Iranians) The Persians have a quite different dynamic going on than the Arabs, and they will be the first to tell you that. It’s important to remember that the Persians and Arabs have basically been at war with each other for 2500 years now (they’ve also both been at war with everyone else, which is what makes the region so dysfunctional) That, from the beginning, has been the driving force between the Sunni (Arab) and Shia (Persian) split inside Islam. The Persians/Iranians do suffer from the debilitating influence of Islam, but they counter that with the collective memory of the time when Persopolis and Persia were the absolute center of the Civilized World, and when all nations came to pay homage to their ruler.

They are born with that memory as their birthright, and their
ancient dreams of Empire are older than even Islam itself. It’s a powerful force, and what makes them a very serious opponent.

2) Ataturk in WW1 – The Ottoman’s still lost the war. I think you’re referring to the Gallipoli campaign, but that brings up one of the consistent and monstrous errors of British Generalship during WW1 – their belief that if they just threw enough tens of thousands of men against entrenched fortifications, they would somehow win. All that strategy did was to produce horrendous casualties and stalemates wherever it was tried, whether in Gallipoli or in France.

Later on, when Ataturk’s government replace the Ottoman rulers, Ataturk was known for being quite atheistic, and he espoused a program of adopting western methods and western values in order to bring Turkey into the 20th century. He’s quite out of fashion now, in the modern Islamist state that Turkey is becoming.

3) The “oil states” have notoriously weak economies when you look at them closely. It’s been called the “curse of oil”, among other things, but the result is that they have incredibly high levels of what we would call unemployment along with heavy subsidies to keep social peace. The Saudis are among the worst at this, but all of the Gulf States have similar policies. There is not a single Arab country today that has anything approaching a self sufficient manufacturing base – compare that to Israel, for example, which has been striving to be self sufficient in everything, since they fear they may have to be.

Interesting discussion, gentlemen. Thank you for sharing your thoughts.

Thank you for an excellent summary.
May I ask your background (academic?) as you seem to know quite a bit, or is it primarily from reading extensively?

It figures that the Saudis would find a coalition of others to do the fighting and dying so that the Saudis don’t have to. Used to be involved in training evolutions imparting military knowledge to some of the 10,000 Saudi “princes”. Soft beyond belief and dumb as wood posts. Most of them left every evolution knowing less than when they arrived. Absolutely worthless in a military sense. If they ever lose the ability to buy their security, the Saudis are a legitimately endangered people.

Absolutely true, but also at a macro level Saudis have oil wealth but not people. Pakistan has people but not oil wealth.

And the Achilles heel for all – all of them don’t trust large blocks of their own people.

I think the title description is wrong.

Dang E is missing on the end. Bah.

Will they have a Shia Battalion and a Sunni Battalion?

And what will keep them apart?