Santelli Calls Out Andrea Mitchell: ‘On Election Night, I Never Saw You So Unhappy’

Santelli Calls Out Andrea Mitchell: ‘On Election Night, I Never Saw You So Unhappy’

Santelli to Mitchell: ‘you pick sides. Everybody picks sides.’ 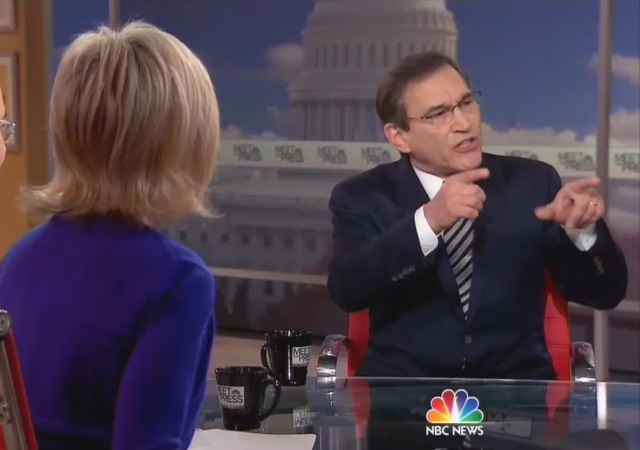 Rick Santelli, the CNBC analyst whose glorious rant led to the creation of the Tea Party movement, created another memorable TV moment today.

On Meet the Press, reacting to reports that the Russians were happy on Election Night because Trump won, Santelli said to Andre Mitchell: “on Election Night, I never saw you so unhappy. You pick sides. Everybody picks sides.” An indignant Mitchell, protecting her [illusory] reputation for objectivity, shot back: “That’s not true, Rick. That’s just not true.” Sure, Andrea.

Note: What makes Santelli’s shot at Mitchell particularly noteworthy is that he was willing to call out for her bias a fellow member of the NBC/CNBC family who is theoretically an objective reporter. And since Rick likely knows Mitchell in her off-camera, more candid moments, he probably has good reason to know where her sentiments lay. Not that her on-camera comments leave much doubt that she leans politically to port.

RICK SANTELLI: To see Russians happy because Trump won, on Election Night, I never saw you so unhappy. You pick sides. Everybody picks sides.

MITCHELL: Let’s get back to the facts here.

That woman and many of her piers wouldn’t know a fact if it hit them up side the head.

I have a question. Why does everyone assume (since I have seen, nor heard anything to the contrary) that the Russians ( even if they did hack, which I doubt)thought that Podesta’s emails would be harmful? What if they proved helpful?

Peers mean you I think!

I assume showtime, with ‘piers,’ was making a clever play on words, suggesting that some in the MSM are dumb as stumps 😉

A group of people who pee…. peers.

The dishonesty is strong in these ones. Brooks is disgraceful. That group, save Santilli – nothing but a circle jerk. They still have no clue.

I’ve never seen so much effort devoted to mountain building from nothing.

Dishonesty requires insight, awareness of the falsehood. A lot of media people don’t appear capable of recognizing their own bias and dishonesty. It’s more of a non-clinical, compartmentalized delusion.

Not dishonest, IMO, ask them and they would say righteous. Speaking Truth to power and all that. A Republican in the White House and a MSM media doing their job they had forgotten. What else can one want?

One can want them to also do their job when we had a democrat in the White House.

Andrea is such a lying sack of shit.

Of course she has an ally coming soon to NBC…

I do not care about David Brooks, but for goodness sake stop calling him a “conservative.” It is a lie and done only so he can trash conservatives as a lackey for his Lefty Media Masters. Being a nominal GOPe who voted for Barack Obama over John McCain, an gushed like a hormonal school girl over Obama’s creases, does not make one “conservative.”

I reckon that the Russians celebrating PResident TeeTime’s election/re-election is immaterial to the current meme.

Mitchell is a paid propagandist – a dishonest hack of the most disgusting sort.

And those are her good qualities.

RIck Santelli was right to expose the profound bias in the media. Andrea Mitchell is clueless. Once upon a time I was a liberal…OMG

Andrea is not clueless, she knows exactly what she is doing and who’s water bucket she is carrying.

Is Santelli really talking to Mitchell here? I’ve only watched the 14-second clip posted above so, I could be missing the fact that Michell is off to Santelli’s left – out of the shot – but it looks to me like Mitchell is actually to Santelli’s right in the foreground of the shot – unless that’s another guest wearing a similar dress and with a similar haircut as Mitchell.

It appears to me that Santelli is actually calling out Chuck Todd.

Well, sometimes experienced TV talking heads look directly at the camera (i.e., the viewers) instead of the present panel members, so maybe…

I hear you, but he’s pointing and saying, “YOU picked sides,” which would seem to indicate he’s addressing someone directly. It wouldn’t make sense for Santelli to point and say that directly into what he thought was a live camera shot, which would indicate he was talking to the audience.

I still say he’s talking to Chuck Todd since they cut to get a reaction from Todd immediately after Santelli makes his statement.

Just offering a suggestion. The last thing I want to do is watch a NBC news show, lol.

As you pointed out,today’s post @ Newsbusters points this way also.
Definitely Santelli was calling out Chuck Todd on his biased response(s) the night of election and Todd immediately counter-punched him as Mitchell jumped in on defense while Todd allowed her play out a monolog that deflected away from the obvious.

I have recently been in various places in Europe. There is great celebration over Trump being elected.

These are the same people who were so happy when Hillary pushed the reset button with Russia. They also fell in line with Obama when he talked about how obtuse it was to talk about Russia as a threat. Now they are concerned? Phony political hacks one and all and Santelli nailed it.

No, Santelli called out Chuck Todd ‘you pick sides. Everybody picks sides’. Todd responded “Who picks sides Rick? Who picks sides?”
And Mitchell jumped in and Todd allowed her to carry his water.

It looked to me as if Santelli was addressing Todd but it wouldn’t have been wrong to address anyone else on that panel.

I believe it was Mitchell who all but cried on camera when Hillary lost.

Except for Santelli an absolute definition of bitter clingers.