Tear gas and trash can fires — this is what democracy looks like! Or something. 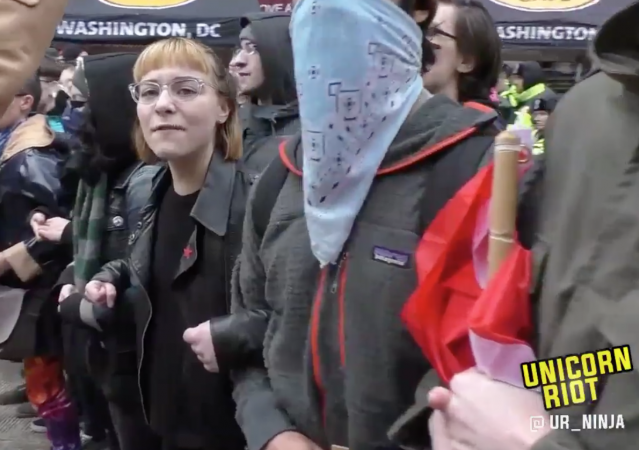 If history has taught us anything, it’s that setting fire to municipal trash cans brings about rapid political change…

Damage to businesses up & down I st. pic.twitter.com/KLucvivMDX

An anti-Trump protester screams 'no' as Donald Trump is sworn in as the 45th US President pic.twitter.com/qmsaFmMSkr

Protesters now dragging park benches over to makeshift bonfire in the middle of K Street. pic.twitter.com/4TlmQAYxTq

NO ONE IS SAFE FROM THE MOB:

Blocking streets is so Occupy:

Anti-Trump protesters have blocked the I-395.pic.twitter.com/abFZdYVEHm

And then there was tear gas:

This is just like the VietNam War Era, without the war

With the Left… We are now at war. Their play time with our country has ended.

Where is the Ohio National Guard?

People ought to remember not to throw rocks at the Ohio National Guard, we don’t put up with that crap!

And Trump is the problem. What idiots.

They can have a million-person peaceful protest every day of the freaking week as far as I’m concerned, whether paid for by Soros, et al, or not. As soon as they start destroying property & assaulting people, game over, move in & arrest them.

The last time I checked, arson, vandalism, and assault were not protected rights in First Amendment.

After the first few, there won’t be many more.

I wonder how many of these are federal employees.

In a few months, former federal employees. (We hope!)

I can’t speak for all federal employees, but the Obama administration wasn’t very well liked by a lot of rank and file workers in the NRCS or the actual workers in the GSA. My parents worked for them (retired under Obama) and they said everybody they worked with hated the administration.

Courtesy of Instapundit: “Do you want more Trump? This is how you get more Trump.”

Those arrested should do public service…. repairing their damage and sent to the border to help build the wall…

Remember when those extremist Tea Party protestors did this in 2010?

This country was built by revolutionary Americans and these are truly revolting Americans.

Oh, boo frickin’ hoo. Get over it, you whiny drains on society. And I say that in the most conciliatory manner possible.

They have become that which they claim to oppose, and, needless to say, they are too stupid and too un-self-aware to be cognizant of that fact.

Donal Trump promised to bring back law and order. Its time to make good on it: arrest, prosecute, incarcerate.

I JUST WANT TO REASSURE ALL OUR FRIENDS ON THE LEFT: Trump is not going to put you all in camps and install a Nazi state. He can’t, because George W. Bush already put you all in camps and installed a Nazi state. Oh, wait, he never got to do it, because we were already all dead in the nuclear war our cowboy president, Ronald Reagan, started by talking tough to the Russians. Now hold on there, Trump is fixing that.

it sounds so silly. I was at a hospital today and one of the LVN’s was in tears, i asked her why – she told me she was so afraid of the future, i kept asking her why and was able to reassure her that she wasn’t going to be rounded up and jailed.

until i actually met someone like this, i couldn’t believe the naivete of some people and how the party of KKK Democraps take advantage and scare people (to insure the votes ALWAYS go to the Donkey Asses) – see the Black Congressional Caucus – a black variant of the KKK.

These rioters are just making Trump look better. He had to beat the Democrats, the news media, and part of his own Republican establishment. He’s a survivor. After the election, Trump haters were painting swastikas and racist slogans on buildings knowing that the news media would likely blame Trump supporters. A few flaming trash cans won’t have much of an effect, especially since everyone already knows who’s doing it.

Smashing the windows at Starbucks was priceless.

Until we take back our universities, and marginalize corrupt corporate news outlets these lunatics will be continually created.

I do not understand protesting the results of a free and fair election or the inauguration of a duly elected President. What do they think we’re going to do… say, oh gosh… you’re upset. Well, we can’t have that so we’ll make Hillary President instead?

Those entitled morons need to learn how to lose. They’re going to have a lot more of it in their future.