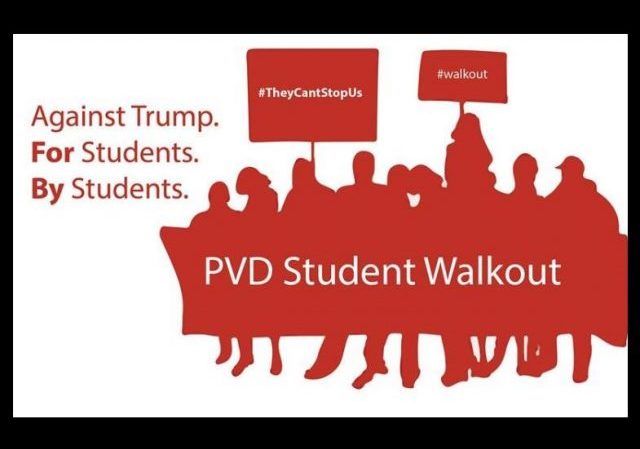 The activists beyond the “Resistance” to Donald Trump’s Inauguration are urging students nationwide to walk out of classes on Friday, January 20, 2017, just prior to Trump’s swearing in.

A student socialist group has organized a nationwide walkout on Friday to protest the presidential inauguration of Donald Trump, fearing the new president and his party will “unleash a storm of attacks” on various segments of the American population.

The National Student Walkout Against Bigotry & Hate is organized by Socialist Students, a campus arm of Socialist Alternative. 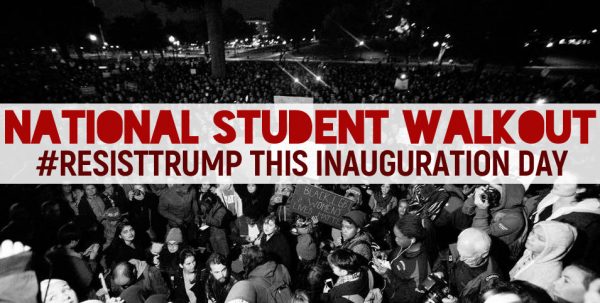 In Providence, Rhode Island, the walkout in public schools is being organized by Youth In Action, Inc. and Providence Student Union, each of which are 501(c)(3) entities. City leaders announced that there would be no discipline beyond an unexcused absence for students who walk out of classes, as WPRI 12 reports:

City leaders aren’t officially supporting a student-led plan to walk out of high schools Friday during President-elect Donald Trump’s inauguration. But they aren’t attempting to stop it either.

A spokesperson for the district confirmed Monday that any student participating in the walkout will receive an unexcused absence, the same policy that would be enforced if a similar protest occurred on any other day. 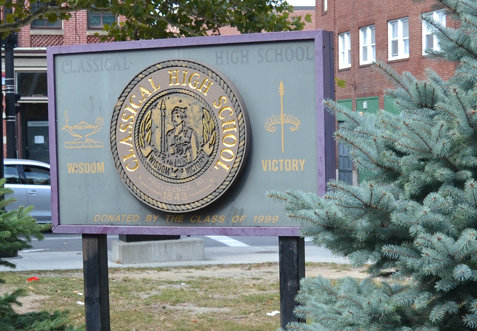 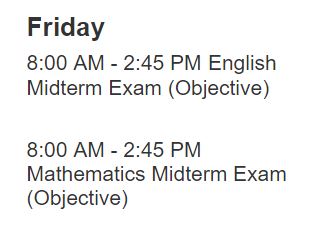 An online Change.org Petition signed by over 700 people requests that the school administration not punish students who participate in the walkout.

In order to accommodate students planning to walk out, the school has moved a midterm exam from Friday to Monday, according to GoLocalProv, a local website providing news coverage, Classical Moves Midterms for Student Walkout Protesting Trump on Friday:

Classical High School in Providence is moving a midterm exam scheduled for Friday to Monday, in order to accommodate a student “walkout” in protest of President-elect Donald Trump that day….

On Monday, GoLocal was first to report that the walkout was planned. As GoLocal wrote:

Providence students are planning a walkout on Friday, January 20 during President-elect Donald Trump’s inauguration, “in protest against the policies under the Trump administration.”

The student-led event is being organized by Youth in Action and the Providence Student Union, and is scheduled to start at 11:08 a.m. and end at the Rhode Island State House.

Youth In Action announced the midterm rescheduling on the Event page: 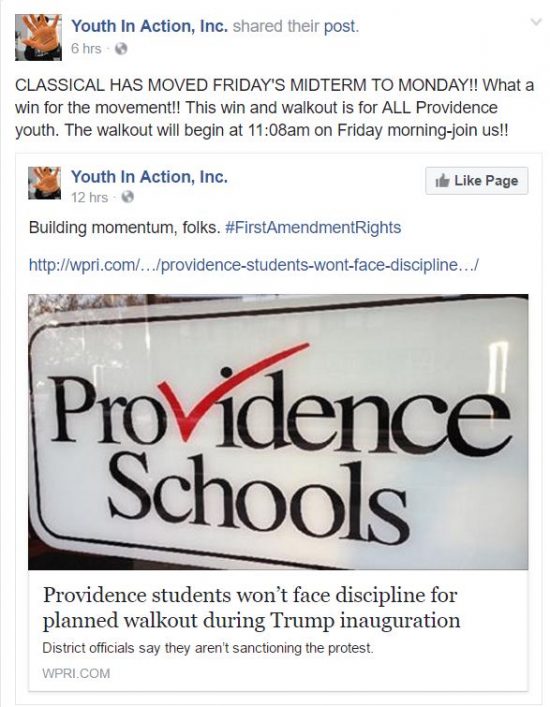 Providence district and Classical High School officials did not return emails seeking comment, but this morning the school website published an updated mid-term schedule which moves the mid-terms to Monday: 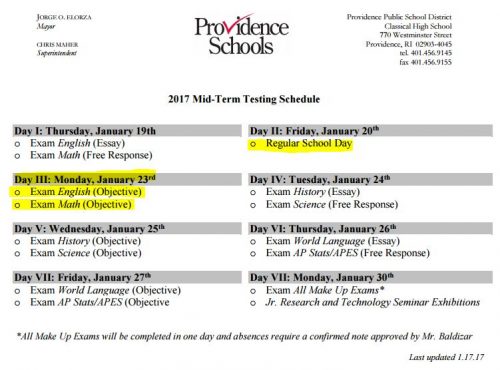 A call to the school confirmed the rescheduling.

Maybe they should just cancel school for the rest of the year.

With what they’re being taught, the kids would be better off.

What will happen to the kids who don’t want to
participate in this foolish activity?

Well we all know what will happen when the tolerant
left gets upset with you. One more reason to get rid
of a failing public school system!

This is why Betsy DeVos has to be confirmed.

This is why Charter Schools need to be funded.

This is why home-schooling needs to be encouraged.

And, since the teachers union is pushing this, this is why Right-to-work needs to be enacted nationally.

…and it is actions such as this as to why I left RI some twenty-five years ago and never looked back.

There is absolutely no “Hope” left for that wretched state…

Not suprised, the left has been in charge of education for a couple of generations.

In a proper setting, our youth would be taught how to reason, not what to think.

You’ve nailed it. I hear educators claim that they don’t teach kids a bunch of useless facts (which, they say, you can always look up on the internet, if you need to), but rather they teach kids how to think.

What they do is to teach kids WHAT to think, not HOW to think. You cannot think properly if you don’t have a bunch of facts available to draw upon when you think.

Years ago, when Intel’s 486 was the top of the line processor, a co-worker said that while he only had a 286 brain and his daughter had a 486, she was still pretty useless because she only had a 5 meg hard drive and he had a 500 meg one. Good analogy. No matter how smart, if you don’t have an adequate pool of facts available (or even worse, a lot of “facts” that just ain’t so), all those smarts will go for naught. I think this explains most of academia today.

Students have to study another weekend just so they can protest something that has know effect on their lives. hardly seems worth it.

They’re teaching these kids a bad life lesson. Try not showing up for work because you want to protest.

An important life lesson opportunity wasted.. “actions have consequences”.
How about a class assignment:

“What, exactly, do you think walking out of your exams is going to actually accomplish? Please give concrete answers. Points will be deducted for non-concrete answers and answers based on feelings. 50% of your grade will be based on what walking out and taking a zero on two major exams will do to your future, 50% will be based on what this will actually accomplish in terms of American government. Minimum 5000 words.”

Sadly, in today’s classrooms the instructions are this:

“Please give politically correct answers. Points will be deducted for concrete answers and any answers not based on feelings. 50% of your grade will be based on walking out, 50% will be based on how faithfully you repeat all dogma given to you by the progressive movement.”

Trump must be really bad if he’s enough to make kids want to ditch school.

What the heck has happened to RI? Time to take the statue of the independent man off the state house and replace it with a giant snowflake.