‘This is going to end badly,’ warns Scarborough, unless Republicans unify and aggressively investigate leaks 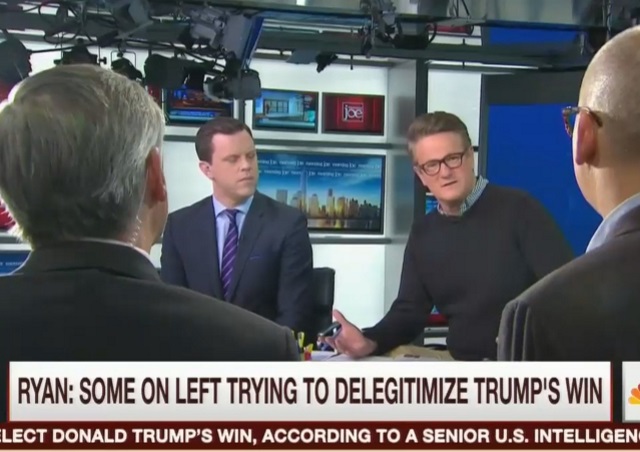 On today’s Morning Joe, Joe Scarborough ripped as “repulsive” Sean Hannity’s “bromance” with Julian Assange, and more generally criticized the Republican change of heart on Wikileaks.  Background on the evolution of Hannity’s views on Assange here [note: from Daily Beast.]

Scarborough noted that when Wikileaks divulged information about a CIA operation some years ago, Assange became the Republican “enemy #1.” In 2010, Donald Trump himself tweeted that WikiLeaks was “disgraceful” and that there “should be death penalty or something.”

Scarborough argued that Republicans are being “stupid” by making the mistake of imagining that the person who gets elected president will be there forever. He predicted that unless Republicans “aggressively go after” the issue of hacking and WikiLeaks, “this is going to end badly!”

John Heilemann speculated that some Republicans are loath to criticize WikiLeaks for fear of getting “on the wrong side of Donald Trump.”

JOE SCARBOROUGH: I want to talk more generally, though, Jon, about just how stupid Republicans look. The same Republicans who, like me, were offended when there were leaks about a CIA program back in 2005, 2006, maybe it was, that actually revealed the location of black sites, exposed our allies. I was just beyond myself. I still am just absolutely stunned that the Washington Post printed that. And Wikileaks, Julian Assange was enemy number one.

JOHN HEILEMANN: For Donald Trump, among others.

JOE: For the Republican party. I saw a tweet from Donald Trump. For every Republican. And now they’re sitting there, like, Sean Hannity is, there’s a bromance there. It’s repulsive.

The Republican party can’t make the mistake that every party makes and think the person elected in the White House is going to be there forever. Republicans are looking like fools unless they come out strongly on this and everybody forgets: there’s another election in two years! And it usually turns ugly when you play as stupid as this. Republicans need to be unified. Donald Trump needs to get on board. They need to aggressively go after this and investigate it because I’ll say it again, I’ve been saying it for weeks — this is going to end badly!

You CANNOT investigate hacking if the DNC will not give you access to their servers. What more are they hiding?

I haven’t watched or listened to Hannity in years but Scarborough makes the ‘mistake,’ perhaps intentional, of thinking & claiming the interest is in the man rather than what that man revealed. A common leftist diversionary tactic – attack the messenger, not the message.

It is always interesting to listen to the media whine about another organization releasing stolen information concerning scandalous activities. “Investigative reporting” was built on the same technique. Whistle blower disclosure of confidential information and pilfered documents have been the mainstay of the investigative journalism field forever.

Then there is the very real disconnect from reality, among the majority of the MSM. They seem to have forgotten WHO publicized the material released by Wikileaks. That’s right, they did. The MSM was the agency responsible for broadcasting and rebroadcasting this “stolen”/leaked information to the entire world. Can these people even spell the word “accomplice”. They got rich off of the release of the material obtained from the DNC and Podesta’s emails. All of which was obtained illegally.

Theft of confidential material and the subsequent release of that material, without the consent of the owner of that material, is a criminal offense. I have no problem with prosecuting anyone who steals or releases such material, including the media. There is no evidence that Wikileaks did anything which the MSM did not do, which was to release confidential material gained illegally. There is no evidence that anyone affiliated with Wikileaks actually stole the material, they only released it once it came into their possession, just like the MSM.

Does it really matter who provides the information as long as the information is truthful? When the WaPo or NYT writes a story that harms a conservative candidate during an election, isn’t that “Meddling” with a US election? It is up to the people reading or hearing the information to decide whether or not to believe it and then to decide if it is meaningful. Does it matter who obtained the Podesta e-mails? Isn’t what was in them the important thing? ANYONE/ANY COUNTRY can put an ad in a newspaper that is false or inflammatory during an election but is that meddling with the election? I certainly do not want the Russians or any foreign government meddling in our elections but as long as the info they provide is the truth who is to say that it is a bad thing?

I would refer everyone to the “Pentagon Papers” scandal of the early 70’s, during which the New York Times (among many others) loudly and proudly advocated the exact position which you are advancing here.

So let me understand this. The USA and the Russians have been spying on, and more recently hacking on, each other for about 100 years and spending probably billions of dollars doing it. Now because it was a political party with below grade security procedures that got itself hacked it has created a tempest in a teapot. Some have said the US security apparatus may have been endangered because of a Watergate like hack. Why are we endangering our spy’s over a second class email burglary? Our spy organizations have too much time on there hands!

“Whistle blower disclosure of confidential information and pilfered documents have been the mainstay of the investigative journalism field forever.”

Yes, well, “that’s not who we are”, anymore, “we’re better than that”. At least until the dirt’s on the Republicans.

It slays me how everyone keeps yelling about Podestas emails being hacked, but they all sorta get lost in the weeds and forget to discuss what was in those emails.

I am part of the pizzagate investigation online. James Alefantis just went postal on a researcher..

The smoking gun is the Pegasus Museum.

Check out these videos…

They just hit the web yesterday.

A little useful idiot on a little leftist propaganda network give an opinion.

Let us do a little Red/Blue compare of the two Wikileaks, shall we?

2005: Wikileaks posts classified information on US CIA operations which most likely will result in getting US citizens killed.

2016: Wikileaks posts emails from the Democratic National Committee which are *not* classified, nor are they operations of the US Government, but *do* show the attempts by the DNC to circumvent their own (professed) rules, as well as highly unethical behavior from multiple people on behalf of HRC.

One is a direct violation of the United States law. One is a security violation of a non-governmental organization by a staff member, which is also illegal, but not normally followed up with the phrase “And thrown into Leavenworth until the sun burns cold.”

And precisely how, if Russia actually did hack the DNC deliberately to influence the election, does it compare to the Soviet Unions infiltrating KGB agents and Communist fellow travelers into the United States to influence US efforts during the Vietnam War, eagerly aided and abetted by the American Left?

“Joe, Is it a betrayal and repulsive that you keep asking Fox to hire you without telling your current employer?”

Couple of children hurling feces at one another.