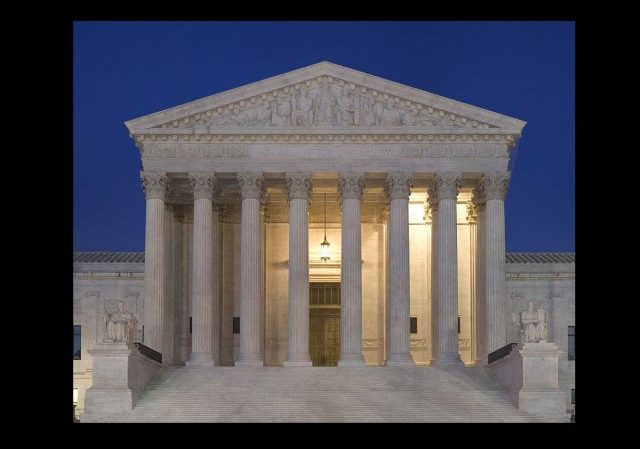 Donald Trump recently said that he would announce his Supreme Court pick on Thursday.

But there are multiple reports today that the announcement may come as early as Monday. Moving up the pick would be viewed as a conversation changer after a media frenzy over the weekend regarding the visa and refugee Executive Order.

A White House official says President Donald Trump could announce his pick for the Supreme Court as early as Monday.

Trump originally said the announcement would come on Thursday, but the official says the timeframe could be sped up.

Three federal appeals court judges are said to have emerged as leading candidates: Neil Gorsuch, Thomas Hardiman and William Pryor. The official says the president has also been considering Diane Sykes, one of his early favorites for the high court seat….

The official was not authorized to discuss the Supreme Court process and insisted on anonymity.

WH SOURCE: The WH is preparing for an earlier announcement of @realDonaldTrump's pick for Supreme Court – likely Tues, possibly tomorrow

The sooner the better. Most everything that Trump does for the next 8 years will probably end up at the Supreme Court.

He has figured out their game. They are going to fly into an indignant rage no matter what he does, so there’s no sense in trying to appease them with moderation. Full speed ahead. Balls to the wall.

Trump is going Full Patton and Marshal Zhukov: saturation attack on multiple fronts; timed, sequential offensives; constantly advancing; and going through his opponents like s**t through a tin horn.

Full Marshall Zhukov? Trump is going to sacrifice thousands of his weaponless followers at the front?

He’s working the MSM like a pro. Scott Adams agrees.

The Media is trapped in a ball of yarns and sophistry.

The Liberals are degenerating nicely on the generational vine with evermore selective, unprincipled, and opportunistic causes.

The Progressive have suffered a thousand cuts with a double-edged scalpel.

The Libertarians are learning to reconcile moral, natural, and personal imperatives.

Meanwhile, Trump is leading from the front.

I really need to find a way to monetize prog tears.

No! At least not before noon on Monday. I need a little time to increase my holdings in Kimberly-Clark before the announcement, because Kleenex is gonna fly off the shelves for the next several months. Might as well let these caterwauling little pansies buy daddy some new shoes.

Where is the mpoll on the pick?

But then again, Trump’s sister serves with Hardiman on the 3rd Circuit and she recommends him.

Please not Hardiman. He may not be the next Souter, but for Scalia we need a rock solid replacement.

Hardiman is not that pick.

Please please please let it be Ann Coulter, just so we can watch the MSM, SJWs, and a whole boatload of lefties lose their poop like it’s never been lost before.

Please let it be a “strict constructionist,” which Scalia termed an “originalist.” SCOTUS is meant to apply the Constitution, not change it. The Constitution doesn’t mention abortion or gay marriage, but SCOTUS has enacted these laws itself, and they have made these new laws superior to the stated protections of free speech and religion. They have also tried to throw out the second amendment, which clearly applied to all the people (like the rest of the Bill of Rights), and wasn’t intended to be limited to the army (which is set forth in Article 1). We need a SCOTUS that believes that the way to change the Constitution is by amendment, not by judicial fiat.