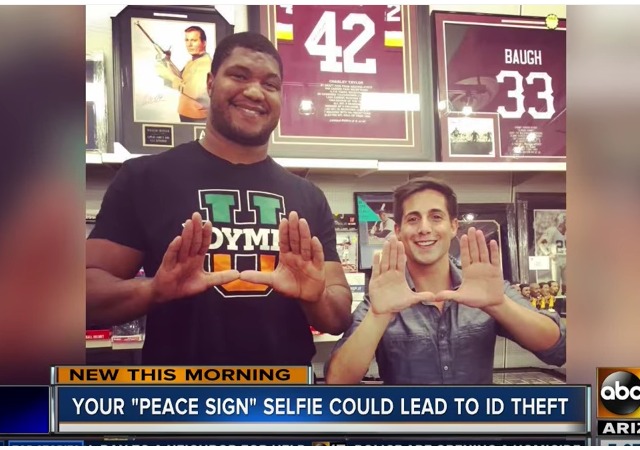 Researchers have found that people can steal your fingerprints if you a flash a peace sign in your selfie. The Telegraph reported:

Researchers at Japan’s National Institute of Informatics (NII) have found that fingerprints can be easily recreated from photos taken up to three metres away without the need for advanced technology. So long as the picture is clear and well-lit, prints can be mimicked.

It isn’t the first time the security of biometrics has been called into question. Back in 2015, hacker Jan “Starbug” Krissler recreated Angela Merkel’s iris from a photo and managed to unlock a test.

Unlike passwords, biometrics cannot be easily changed, prompting fears over the safety of people’s personal data.

“We shed physical biometric data wherever we go, leaving fingerprints on everything we touch, posting selfies on social media, and videos with friends and family. Much of this information can then be captured by fraudsters,” said Robert Capps, from biometrics company NuData Security.

“Once biometric data is stolen and resold on the Dark Web, the risk of inappropriate access to a user’s accounts and identity will persist for that person’s lifetime.”

Maybe it is time to bring back the lady’s glove for everyday wear.

Any selfie can be a personal security risk. Especially if it’s taken at home, or someplace you visit frequently, like a school, friend’s house, grocery store, etc… Real life example: I got a strange wrong number call, but the person calling used my first name in his message left on my voicemail. To
verify that it WASN’T someone I actually knew, I searched the number. I decided to take my perfectly legal searches as far as I could just for kicks. Well, at least until it got scary. Two hits led me further to a online service where the number had an ad, and a FULL name. The full name turned out to be my caller’s mother. Searching her name led me to the state’s business registar, where I got an address, and the names of several family members who also had businesses. The mother had a business address that turned out to be out of her own home. An address search got me pictures of the home from several sites, at various times and dates, including various identifable vehicles in the driveway. One name in the business registar matched the first name of my mystery caller, a search of HIS full name got me another address, more home pics, a picture of the van he used for business and, here’s were it REALLY got scary…. his Facebook page– where he had posted pictures of himself with his lovely teenage sister– in front of her high school. All this from a single wrong number.

So THAT’S why the whole “Hands Up, Don’t Shoot” thing was started… huh.

Sounds like law enforcement should run all the BLM news footage through a reader and check for outstanding warrants.