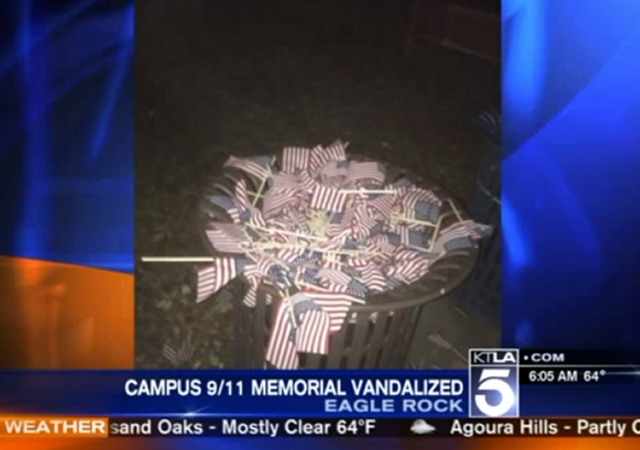 It’s hard to imagine anything more despicable than disrespecting the victims of 9/11. This incident happened in the fall but it’s still impacting the school.

What does a college do when students trash a 9/11 memorial? That was the question facing Occidental College in Los Angeles after vandals destroyed a display of nearly 3,000 American flags placed by Conservative and Republican club members on the Quad.

Privacy regulations demand that the college can’t publicize any sanctions against the guilty parties. And campus-wide calls for unity and understanding smack of blaming the victims for not getting the message that the American flag can trigger feelings of hate and revulsion in some students.

This spring semester, the small liberal arts college will host speakers and a series of documentaries to try to bind up the wounds. Will it be enough for some and too much for others on campus? This is the place where President Barack Obama spent his first two years of college and NFL quarterback and Republican icon Jack Kemp, class of 1957, had a football stadium named in his honor in 2011.

The news of the destruction of the flag field, which was approved by the administration and publicized ahead of time via campus email, made national headlines. On September 10, students helped push 2,997 flags – representing those who died in New York, Washington and Pennsylvania 15 years earlier – into the ground around the Quad. In the overnight hours, someone pulled them all out and tossed them in the garbage. Then to prove it wasn’t a spontaneous move, the perpetrators put up their own signs and copies of “Alabanza: In Praise of Local 100,” a poem in honor of the cooks and dishwashers at Windows on the World restaurant who died in the World Trade Center attack.

Campus leftists are traitorous bastards. Is that really a surprise?