“Many stars found the evening emotional” 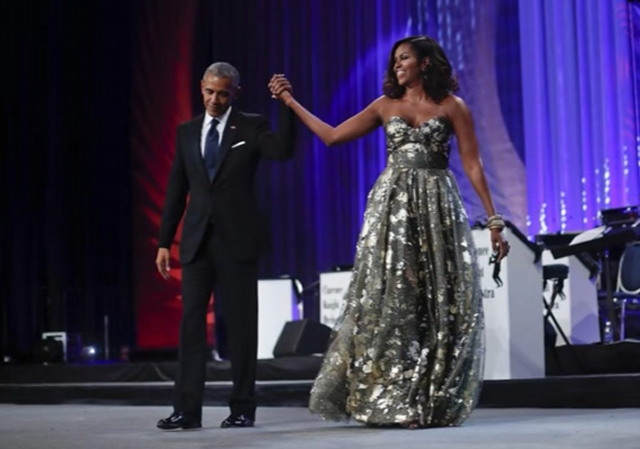 No president in recent memory has been more embraced by America’s celebrity class than Obama. Liberal Hollywood has celebrated with Obama at the White House countless times but this weekend they had one last hurrah.

Inside the Obamas’ final star-studded party: White House bash goes on until 4am with Meryl Streep, Tom Hanks and SJP on the dance floor and chicken and waffles for breakfast

Dozens of celebrities turned out to party until 4am at the White House in a farewell bash that saw the likes of Paul McCartney, Meryl Streep and SJP tear up the dancefloor.

The strictly VIP guestlist were banned from recording inside the party where Barack and Michelle served chicken and waffles to weary partygoers in the early hours of Saturday morning.

Solange, the sister of Beyonce, said that it was ‘truly the ultimate, ultimate honor.’

She continued: ‘We will miss your excellence, your grace, and the phenomenal legacy you have let us all share.’
The bash was well attended by artists, philanthropists, activists, and executives, many of whom made the trip to Washington D.C. just to saw their farewells.

The evening was likely bittersweet for the first family, with Donald Trump’s inauguration less than two weeks away.
‘It’s something that they’ve done in the past and something I anticipate they’re going to do again tomorrow,’ White House Press Secretary Josh Earnest said Thursday…

Many stars found the evening emotional as they faced the impending loss of Obama in the oval office.

Comedian and TV host Billy Eichner posted a touching tribute to the President in his Instagram post, after getting the opportunity to discuss Obama’s work with the LGBT community last night.

‘He told me it was one of the things he’s most proud of. I told him we will love and appreciate him forever. He told me there’s a lot of work we still need to do,’ Eichner said.

‘Setting aside for a moment the sadness and anger I feel about the next administration, this was one of the greatest moments and nights of my life.’

The press was barred from the event, although there were probably plenty of media folks there as guests. The New York Daily News did manage to put together this video report:

This was a fitting end for Obama and his party. Some have suggested that the Democrats have become the party of wealthy, coastal elites. What could reinforce that image better than an exclusive White House party for A-listers?

Gosh however did Democrats lose the working class vote this election https://t.co/pWe10RHTsa

Some mysteries will never be solved https://t.co/dwMVIqBuYw

maybe, lecturing people about healthcare they can't afford then going off to party with celebrities might have had something to do with it

Solange, the sister of Beyonce, said that it was ‘truly the ultimate, ultimate honor.

I am getting emotional, too: Euphoric at the thought of the Obamas gone in under 2 weeks.

I wake up every morning with a big smile knowing we’re one more day closer to adult leadership.

Can’t wait to pay my part of that bill. Just imagine how much smaller the deficit would be if this couple lived like normal Americans.

A large gathering of greedy, crooked 1-percenters shmoozing with one of the politicians they bought with their dirty money.

Where is Occupy Wall Street, now that we actually need them?

May none of these Liberal scum ever see the inside of the White House again!! Trump needs no celebrities to validate his concepts, just the people.

These guys are no longer artists, but ideological propagandists with a fake message.

Who is “SJP”? Social Justice Pioneer?

The rabidly anti-Semitic (and Democratic Party supporters) Students for Justice in Palestine?

Hillary is still trying to figure out why more people didn’t vote for her even though JayZ and Beyonce told them to.

It’s almost like most people don’t care what JayZ and Beyonce have to say. hmmm.

Maybe all these celebrities will keep them busy being celebrities and leave no time to ‘organize’.
Too bad they weren’t discovered 10 years ago.

A true celebration, and Orkin should have been in attendance celebrating that all vermin in the White House will be eradicated on January 20th.

Now, time to cure the disease caused by the vermin.

Are they making another anti-Trump video because those are really effective.