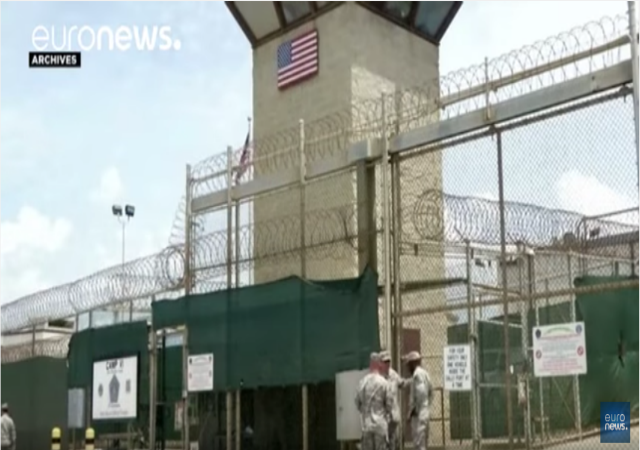 President Obama is slowly draining the terrorist prison in Guantanamo Bay before turning the White House keys over to Trump.

In the wee hours of the morning, it was announced that Oman accepted ten GITMO prisoners.

BREAKING: Oman says it has accepted 10 inmates from U.S. prison at Guantanamo Bay ahead of Obama leaving office.

Oman accepted the men in accordance with U.S. efforts to settle the Guantanamo issue, the country’s state-controlled news agency said in a brief statement, citing an Omani Foreign Ministry source. It didn’t release the names or nationalities of the men. A request for further details wasn’t immediately returned.

The transfer follows others by the U.S. to its Persian Gulf allies in recent years. Many of the detainees have been Yemenis whom the U.S. hesitated to resettle in their home country given the continuing conflict and political instability there.

As the WSJ points out, there were 55 detainees remaining before the latest prisoner transfer to Oman.

Over the last several months, President Obama has released a total of thirty-one prisoners (including those recently released):

As 2017 began, President Obama released four more Yemeni prisoners — to Saudi Arabia, also promising to release between 13 and 15 of the 19 men approved for release before he leaves office and the uncertainties of Donald Trump’s presidency begin in earnest.

Campaigning prior to the 2008 election, President Obama promised to shutter GITMO. President-elect Trump has promised to keep the detention facility open.

At least 122 of these cretins have returned to their Jihadi ways since being released from Gitmo.

The senate needs to pass a resolution stating that ‘Dear Leader (bho)’ will be help PERSONALLY responsible for all and any criminal activity resulting from these releases.

Let’s see who will vote for this.

Too bad that Oman and those other “Persian Gulf Allies” won’t accept their own refugees . . .

How many will he invite to dinner at his new D.C. digs?

Are you kidding! That would come out of his own pocket.

Fifty-five left. Barack Obama will probably release the rest by Friday morning. And then close Guantanamo by Executive Order.

My money says you are 100% right especially noting that Ben Rhodes is in Cuba today so you can bet there’s some back scene Gitmo conversations.

Jimmy Obama is a traitor.

MikeE — close Gitmo by executive order? Why stop there, why not deed Gitmo over to Cuba while he’s at it. I wouldn’t put it beyond him. Also, there is the blind sheik who was responsible for the first Twin Tower bombing. I’m surprised he has released that piece of work through Presidential Pardon.

Obama continues his aid of the jihad.

And the dems would have run him if there wasn’t a term limit. I kind of hope Trump can put a federal prison next to obama’s new mansion in D.C.
We could house the next wave of terrorists there.

Speculation: Obama will turn over the rest of the prisoners to Cuba as he hands R. Castro the keys to the base.

You know, “closed GTMO” was one of his promises and all.

Long shot, but I wouldn’t be surprised if Obama just pulled out the trusty old pen to make it happen. Because legacy.

The next 90 hours are, in some ways “dangerous” given to what lengths he’d go…

It would have to be done in a fashion that the current administration could do swiftly and irreversibly. Simply turning the base over to Cuba is anything but simple, BUT there’s still a week left in which I really expected the remaining prisoners would be sent to either Leavenworth or a foreign (sucker) country, and the facility for prisoners would then be immediately bulldozed before Trump takes office.

… to join the axis of terrorism from Benghazi to Aleppo to Kiev.