In addition to a Science article on clean energy, Obama publishes his first formal piece of legal scholarship.

Those of you concerned about Barack Obama’s future once he leaves the White House in less than two weeks can now rest easy.

Apparently, he has decided to start a second career as a climate scientist!

The soon-to-be-former President of the United States had a policy paper that just published in Science (hat tip Willis Eschenbach posting in Watts Up With That).

The piece is entitled: The irreversible momentum of clean energy:

The release of carbon dioxide (CO2) and other greenhouse gases (GHGs) due to human activity is increasing global average surface air temperatures, disrupting weather patterns, and acidifying the ocean. Left unchecked, the continued growth of GHG emissions could cause global average temperatures to increase by another 4°C or more by 2100 and by 1.5 to 2 times as much in many midcontinent and far northern locations

Although our understanding of the impacts of climate change is increasingly and disturbingly clear, there is still debate about the proper course for U.S. policy—a debate that is very much on display during the current presidential transition. But putting near-term politics aside, the mounting economic and scientific evidence leave me confident that trends toward a clean-energy economy that have emerged during my presidency will continue and that the economic opportunity for our country to harness that trend will only grow. This Policy Forum will focus on the four reasons I believe the trend toward clean energy is irreversible.

While Obama is heating up the rhetoric on global warming, recent analysis shows that world temperatures over land have taken a dive:

Global average temperatures over land have plummeted by more than 1C since the middle of this year – their biggest and steepest fall on record.

The news comes amid mounting evidence that the recent run of world record high temperatures is about to end.

The fall, revealed by Nasa satellite measurements of the lower atmosphere, has been caused by the end of El Nino – the warming of surface waters in a vast area of the Pacific west of Central America.

Furthermore, 49 of our 50 states have snow, and over 2/3rds of the United States is covered in the stuff. This includes Hawaii, Obama’s home state! 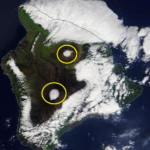 Intriguingly, Obama, the first black president of the Harvard Law Review and senior lecturer in law at the University of Chicago Law School, also recently published a piece of legal scholarship for the first time.

The president’s first journal article appeared Thursday in the Harvard Law Review and concerned the role of the executive branch in advancing criminal justice reform.

Though supporters lavish praise on a man they call a constitutional scholar, Professor Obama left practically nothing by way of a paper trial at Harvard or the University of Chicago. The scant six pages unearthed by Politico in 2008 addressing whether an unborn child has standing to sue its mother appear to be the only scholarly piece Obama produced as a law student or a law professor.

I wonder why Obama has retired his golf clubs for his pen in recent weeks. Perhaps he is getting tired of all the winning President-Elect Donald Trump has done over the past few weeks with the magic wand.

Less than 10 days until Obama can spend even more time developing his second career. Given the data, I think it will be as successful as his presidency.

The reason there is little on the way of paper work is simply because none exists.

Barry is the ultimate man who never was.

The sub-title “Obama publishes his first formal piece of legal scholarship” is erroneous. This work (certainly ghost-written by someone else) is not a piece of legal analysis or opinion. My point is not an exercise in “fault finding”.

It is important for your readers to appreciate that, despite his “Harvard Law School” credentials (including “President” of his class), the O-selfie has NEVER WRITTEN A MEANINGFUL PIECE OF LEGAL SCHOLARSHIP IN HIS LIFE. He made one rather small “case note” of no importance or value–and that was likely written by someone else, as well. It could have been written by a high school student. The world has no reliable, independent evidence of intellectual capacity for this phony.

THIS “EMPEROR” OF THE WORLD HAS NEVER HAD ANY CLOTHES.

Obama thought bubble: (The more BS chaff I can toss in the air the less focus will fall on my feeble legacy).

Oh look, a con where he can be a preening moral busybody and strut about the world smugly on other people’s dimes. Color me shocked.

Sorry, that job was taken by Algore.

What are the odds both papers were not actually authored by Barak Obama?

I understand there’s some pretty good software for detecting who wrote what as between different samples.

Forensic labs within larger PDs often have that software. You got local connections? That would be funny as hell..

It’s readily available privately, as I understand, and is used by civil attorneys to build plagiarism cases and the like.

so, who wrote them for him?

the #SCOAMF lacks the skills to write anything coherent, as anyone who has ever heard him speak extemporaneously can testify.

Well, to be an nitpicky jerk, a role I always enjoy, unless Obama wrote all his own speeches, their awfulness accrues to his speechwriters, not Obama, and he might be a fine writer. Alas, if he were a fine writer, he’d be writing his own speeches. *sigh* I’m going to enter this and then down vote it.

The primary source of CO2 (carbon dioxide) due to human activity is respiration. CO2 is the human waste product released into the atmosphere when you breathe. It is a requirement for plants. Their respiratory waste product is the O2 (oxygen) that we need. Plant more trees.

Greenhouse gases are the particular mix of gases that make up our climate. Without them there is no life on earth. Like all chemical environments, atmospheric gases are not a static quantity. They are constantly combining, separating, reforming. It is a balance, not stasis.

It might behoove Obama, before he decides to embark on a second career as a climate “scientist”, to take a few science classes.

Granny: Greenhouse gases are the particular mix of gases that make up our climate. Without them there is no life on earth.

Very true. Without the greenhouse effect, the Earth’s mean surface temperature would be a a frozen ≈-18°C rather than the balmy ≈+15°C that it is.

Granny: Like all chemical environments, atmospheric gases are not a static quantity.

The atmospheric concentration of CO2 has been relatively consistent since before the dawn of civilization, until the industrial age.

He is as much a scientist as he was a law professor.

A fair point. For *years* we have been lectured that only official Climate Scientists (you know, with the secret decoder ring and degree) could possibly understand the highly complex world of measuring a thermometer. In order for Mr. Obama to become a respected expert, he will need to attend several years of university courses and produce a number of clever papers detailing his knowledge before being taken seriously. Perhaps a thesis in statistics would be a good start, along with the scientific ethics of presenting all of your original data, regardless of any tweaks, edits, or fiddles.

Obama has been touted as a “brilliant lawyer” with no track record to substantiate it.

He has also been awarded a Nobel Peace Prize with no legacy to substantiate that either.

It’s only a matter of time that anyone of the liberal universities that have perpetuated the above, give him an honorarium Doctor of Science degree.
Somewhat similar to when The Oz gave the Tin Man a brain but less significant than that.

Justice anyone? I just thought, how just would it be if he was struck by lightening? ROFL That would certainly be some form of weather change!

In other words, Obama will become a lobbyist for lefty causes.

“While Obama is heating up the rhetoric on global warming, recent analysis shows that world temperatures over land have taken a dive…”

Typical Obama. He says the sky is blue and it’s almost immediately shown to be something else.

How many times has he definitively said that something is true and almost immediately was proven wrong?

“The Earth’s climate has always changed, and very likely will continue to change, regardless of what humans do. What is now clear, though, is that the establishment has no idea what those changes will be — much less what drives the changes or how to control them” Alex Newman

And for this very astute statement, Obama, like Gore, will slime his way into the debate and find himself among those who have raped and pillaged for the lucre bestowed upon those leftists and globalists who proliferate the “Henny-Penny theory of climate change”.

How many times has he definitively said that something is true and almost immediately was proven wrong?

I’m pretty sure one more time and he’ll get a free set of steak knives.

I wonder why Obama has retired his golf clubs for his pen in recent weeks.

The weather’s crapola in all 57 states.

Been in the 70’s close to 80’s here at Tucson National. If he really wanted to put his little ball in a hole in the ground, he could.

He probably put check marks next to options given to him by ghost writers. Being better writers and thinkers, they probably ignored all his suggestions.

Ben Rhodes is a failed fiction writer. He is probably Obambi’s ghost writer.

Without a doubt, this article is not a peer-reviewed paper. Al-Chicagi is too thinned skinned to permit anyone from poking holes in his theories.

MAYBE Mooooochelle could critique his writing, but that’s about it. Jarret would rehabilitate him, regardless.

Does that mean he could never be tried by a jury of his peers, having none?

The IEA noted that “There have been only four periods in the past 40 years in which CO2 emission levels were flat or fell compared with the previous year, with three of those—the early 1980s, 1992, and 2009—being associated with global economic weakness.

So, now he is probably going to take credit for the ‘flat periods’ but give credit to Bush for the ‘economic weakness.’

If he really wanted to help humanity he could return to the country of his Father’s birth and work in a leprosy ward or go afield and help build irrigation systems for the starving farmers.

I mean, he might be an idiot but he probably is aware water flows downhill.

I just got a mental image of the presidental shitter just off the Oval Office with ‘Hot’ and ‘Cold’ stickies on the sink taps.

America’s own ex-Kenyan ex-President, preparing to shake down monies from banks and corporations to save the climate (aka weather). The ‘Magic Negro’ strikes again!

Hallelujah, the weather will be saved! The sky’s will not fall, nor the oceans rise – all because of the ‘Magic Negro’.

That’s funny. If you look at the graph, you’ll see that virtually the entire period is above the long-term average.

He hasn’t written anything.

“I wonder why Obama has retired his golf clubs for his pen in recent weeks.”

Because no one is letting him win anymore.