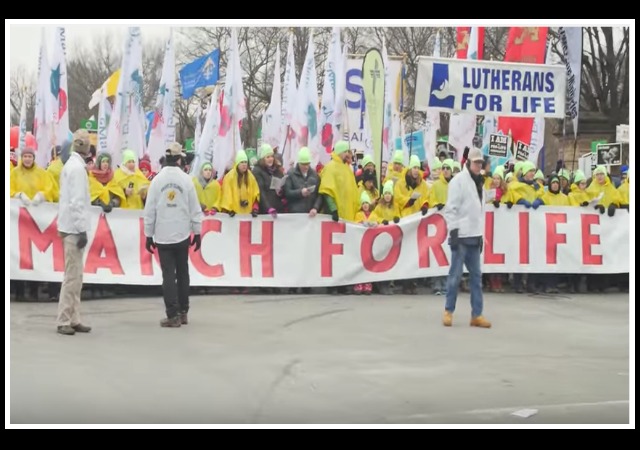 Is anyone shocked? Pro-abortion females descended upon Washington, D.C., to protest rights they already have and the media went wild. These females received all the attention they wanted and then some.

Now, on Friday, tens to hundreds of thousands will come to D.C. as they do every year. No matter the weather, these people march every year. Every year it gets bigger. Yet the media ignores them. That’s because these people participate in the March For Life against abortion, the act that literally denies a human being the right to life. The most basic human right. Even more disturbing? The majority of those unborn lost to abortion are females.

More irony? These feminists backed a woman who remains married to a man who has a long list of women who have accused him of rape and sexual assault.

Katie Yoder at NewsBusters found that networks gave the pro-abortion marchers 129 times more coverage than any have ever given the March For Life:

During their morning and evening news shows, the three broadcast networks (ABC, CBS, NBC) covered the women’s march 129 times more than they did the 2016 March for Life last year. And it’s anyone’s guess as to whether or not they will cover the 2017 March for Life Friday.

ABC, CBS and NBC spent at least one hour, 15 minutes and 18 seconds on the women’s march. But for the 2016 March for Life, they devoted an embarrassing 35 seconds (22 seconds following the march, 13 before).

Before the women’s march even happened, the network news shows had devoted nearly 23 minutes to the event.

Disgusting. Oh, Yoder also noticed that none of these networks bothered to mention that this women’s march excluded pro-life feminists. THEY EXCLUDED WOMEN FROM THIS MARCH. But feminism! No, proving once again this march was about murdering unborn human beings and forcing us to pay for their birth control.

Nope. Only praise for these brave women:

On Jan. 23, following the march, CBS This Morning still touted the event, with co-anchor Norah O’Donnell commenting that “Organizers of the women’s marches are taking steps to transform the energy from the weekend protest into action.” Her colleague, Charlie Rose added, “Could it take – begin there and become something larger in terms of the empowerment of women in terms of the whole range of issues that are crucial for women and their place and their opportunity to participate in the world that we live in?”

That same day, during Evening News, CBS anchor Scott Pelley called the marches “extraordinary” and wanted to know, “So, what happens next?”

NOTHING for the peaceful protesters who march for life every single year. How much coverage do you think they’ll receive on Friday? Every time I cover it I notice that the media calls the marchers anti-choicers. Lovely.

But now some big names have demanded that the media provide equal coverage to the March For Life:

Brent Bozell, President of the Media Research Center:
“This Friday is a true test for the media. They provided massive, and fawning coverage of the pro-abortion ‘Women’s March’ just four days ago. The media’s coverage of the ‘March for Life’ in two days, both in time and tone, will tell you everything you need to know about their support for abortion. With media’s trust in the basement, they will be exposed for the partisan hacks they are if they don’t give pro-lifers the same amount of coverage. I’m not holding my breath.”

Lila Rose, President, Live Action
“The pro-abortion bias of many major media groups is both shameful and indefensible. But they still have time to redeem themselves. After the wall-to-wall coverage that the “Women’s March” on Washington received just a week earlier, will the mainstream media suddenly lose interest in marches this Friday when hundreds of thousands descend on Washington, D.C., to stand up for life?”

Marjorie Dannenfelser, President, Susan B. Anthony List:
“For years, major media outlets have shown little interest in covering the March for Life, willfully ignoring the size, strength, and perseverance of the pro-life movement. We challenge the media that covered last week’s Women’s March with great enthusiasm to come to the March for Life and show the world what hundreds of thousands of pro-life activists look like. We will be there, as we are every year, filled with joy and hope, marching on behalf of unborn babies and their mothers. This year pro-life Americans from across the nation will also be joined by Kellyanne Conway, counselor to the President, who considers herself among the ‘pro-life rank and file.’ Our movement is poised to make historic gains for unborn children and women with this new pro-life President and Congress.”

Found! The true inspiration for the famous knitted “pussy hat” of the marchers!

The March for Life was likely well organized, the participants well-behaved. They likely cleaned up after themselves. So, nothing newsworthy compared to pu$$y hats, obscenity-laden speeches, given in strident shrieking voices, vandalism, and other newsworthy behavior.

Pro-life women were given the cold shoulder at the march but I bet Bruce Jenner would have been welcomed with open arms.

Imagine if President Trump (love saying that!) decided to march with them? The media would be forced to cover it!

The MSM is a conspiracy of corruption. Nothing new with that.

What is new is The Donald’s – and our – revenge: their marginalization and dilution.

They also didn’t cover little incidents like this one, where a group of BLM fans assaulted a church group from TX: