“The ‘Women’s March’ is an extension of strategic identity politics”

Predictably, the “grassroots” and “spontaneous” women’s march wasn’t so grassroots, after all.  It may have started as such, but things changed rather quickly.  Ultimately, more than 50 groups, PACs, and assorted organizations backed by billionaire agitator George Soros were deeply involved in the march.

A self-declared “life-long liberal Democrat who voted for Trump” uncovered the tangled web of the money trail for the New York Times.  Asra Q. Nomani explains that “the march really isn’t a ‘women’s march.’ It’s a march for women who are anti-Trump.   As someone who voted for Trump, I don’t feel welcome . . . .”

Part of the problem, she contends, is that the march is neither the spontaneous grassroots rallying cry for women nor the nonpartisan love-fest it was portrayed as being.  She decided to “follow the money” and discover what, if anything, that would reveal.

Following the money, I poured through documents of billionaire George Soros and his Open Society philanthropy, because I wondered: What is the link between one of Hillary Clinton’s largest donors and the “Women’s March”?

I found out: plenty.

By my draft research, which I’m opening up for crowd-sourcing on GoogleDocs, Soros has funded, or has close relationships with, at least 56 of the march’s “partners,” including “key partners” Planned Parenthood, which opposes Trump’s anti-abortion policy, and the National Resource Defense Council, which opposes Trump’s environmental policies.

The other Soros ties with “Women’s March” organizations include the partisan MoveOn.org (which was fiercely pro-Clinton), the National Action Network (which has a former executive director lauded by Obama senior advisor Valerie Jarrett as “a leader of tomorrow” as a march co-chair and another official as “the head of logistics”). Other Soros grantees who are “partners” in the march are the American Civil Liberties Union, Center for Constitutional Rights, Amnesty International and Human Rights Watch. March organizers and the organizations identified here haven’t yet returned queries for comment.

On the issues I care about as a Muslim, the “Women’s March,” unfortunately, has taken a stand on the side of partisan politics that has obfuscated the issues of Islamic extremism over the eight years of the Obama administration.

“Women’s March” partners include the Council on American-Islamic Relations, which has not only deflected on issues of Islamic extremism post-9/11, but opposes Muslim reforms that would allow women to be prayer leaders and pray in the front of mosques, without wearing headscarves as symbols of chastity.

Partners also include the Southern Poverty Law Center (SPLC), which wrongly designated Maajid Nawaz, a Muslim reformer, an “anti-Muslim extremist” in a biased report released before the election. The SPLC confirmed to me that Soros funded its “anti-Muslim extremists” report targeting Nawaz. (Ironically, CAIR also opposes abortions, but its leader still has a key speaking role.)

Another Soros grantee and march “partner” is the Arab-American Association of New York, whose executive director, Linda Sarsour, is a march co-chair. When I co-wrote a piece, arguing that Muslim women don’t have to wear headscarves as a symbol of “modesty,” she attacked the coauthor and me as “fringe.”

Earlier, at least 33 of the 100 “women of color,” who initially protested the Trump election in street protests, worked at organizations that receive Soros funding, in part for “black-brown” activism. Of course, Soros is an “ideological philanthropist,” whose interests align with many of these groups, but he is also a significant political donor. In Davos, he told reporters that Trump is a “would-be dictator.” 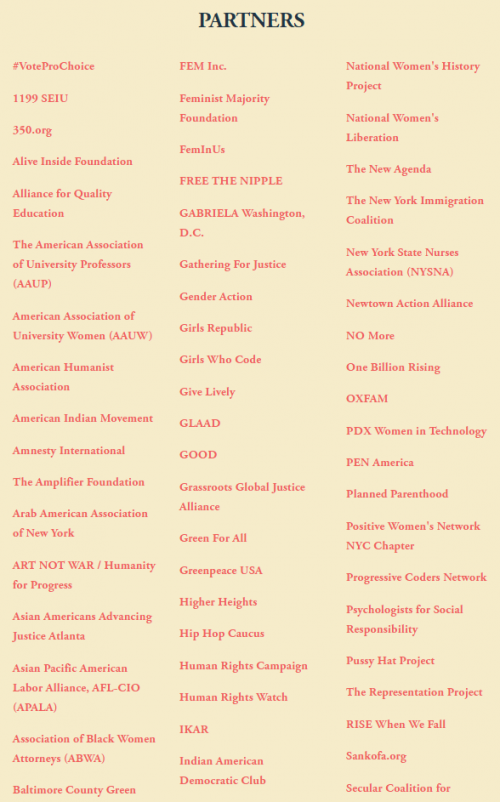 At the bottom of Nomani’s article is an editor’s note:

EDITOR’S NOTE: This story has been updated to include a statement from the Open Society Foundations.

Here is what was apparently added:

She added, “We support a wide range of organizations — including those that support women and minorities who have historically been denied equal rights. Many of whom are concerned about what policy changes may lie ahead. We are proud of their work. We of course support the right of all Americans to peaceably assemble and petition their government—a vital, and constitutionally safeguarded, pillar of a functioning democracy.”

Nomani concludes with the following observation:

Much like post-election protests, which included a sign, “Kill Trump,” were not  “spontaneous,” as reported by some media outlets, the “Women’s March” is an extension of strategic identity politics that has so fractured America today, from campuses to communities. On the left or the right, it’s wrong.

But, with the inauguration, we know the politics. With the march, “women” have been appropriated for a clearly anti-Trump day. When I shared my thoughts with her, my yoga studio owner said it was “sad” the march’s organizers masked their politics. “I want love for everyone,” she said.

Wanting “love for everyone” may well be a genuine desire among many Democrats.  However,  even the most well-meaning marches rooted in identity politics are not the path to that worthy goal.

While I understand Nomani’s frustration that her group was appropriated, complaining that a “women’s march” was hijacked by other left-wing groups and thus not a pure “women’s march” about women is a step shy of a meaningful condemnation of identity politics.

Until they realize that “love for everyone” entails breaking through the barriers imposed by identity politics, they will continue to be used, “organized,” and funded by persons and groups whose agenda is based on anything but love.

They forgot to mention Hamas on their poster:

“Linda Sarsour, one of the organizers behind Saturday’s Women’s March, being held in Washington, D.C., was recently spotted at a large Muslim convention in Chicago posing for pictures with an accused financier for Hamas, the terrorist group.

“Sarsour, the head of the Arab American Association of New York and an Obama White House “Champion of Change,” was speaking at last month’s 15th annual convention of the Muslim American Society and Islamic Circle of North America.”

You won’t see this in the MSM – Trump would do well to replace the likes of NBC in the White House press room with a rep from this blog. This blog is a source of news.

Yeeeup. Soros will use anyone or anything.

I put this in the readers section earlier.

The print edition of Friday’s Washington Post, on the last page of the A Section, contained a full-page advertisement featuring a “painting” of an arresting Muslim woman in an American flag hijab. The image appears to be the work of Shepard Fairley, the artist who created the now iconic (if illegally copied) Obama Hope picture of 2008. It is a clever and insidious piece of leftist/Islamist propaganda put out by a far-left organization called the Amplifier Foundation, which obviously hopes it will become as well known and popular as Fairley’s Obama image. It is worth examining for its tricks and illusions, as a cautionary example of how far the left can go, and how effective it can still be, in the age of Trump.

Great find, 4fun, I addressed this a bit in my post about the “progressive Tea Party.” Check it out and let me know your thoughts.

The most comical thing about that Hijab picture is how tone deaf and self defeating it is. If Democrats want to win any future national elections, they need to figure out how to win back working class white voters in the rust belt. No one seriously disputes that.

So how is picturing a muslim wiping her greasy hair on an American Flag inspire white working class voters in the midwest to vote Democrat again? Seriously, how do they think that is going to work out for them?

It’s the same kind of thinking that says a radical black muslim who was a former member of the biggest white hating group in the country is the perfect man to win back white voters to the party.

BTW, I’ve been wearing a pussy hat for a week. Talk about false advertising.

Wait, the anti-Trump demonstrations were NOT spontaneous, grass-roots affairs, but organized, choreographed affairs financed by a noted enemy of the Untied States?

How can this be? Who knew?

Does Russia have a warrant out for Soro’s arrest? Trade him for Snowden. Win win.

Fuzzy,
Why scare quotes around grass roots? It’s not AstroTurf if grass roots show up, and they did. I personally know them. I know many of them.
Yes, it was centrally organized, but the outrage is quite authentic, and for good reasons. At least some of them are good reasons.

Just as good a reason as I or most of the people I know would have had to protest against Obama in 2009 or 2013, but we didn’t.

We had an election. They’re mad they didn’t win, we get it. Too bad, you get another try in 4 years.

I vaguely remember a series of protests called the Tea Party.