Mika calls out the hypocrisy in the media. 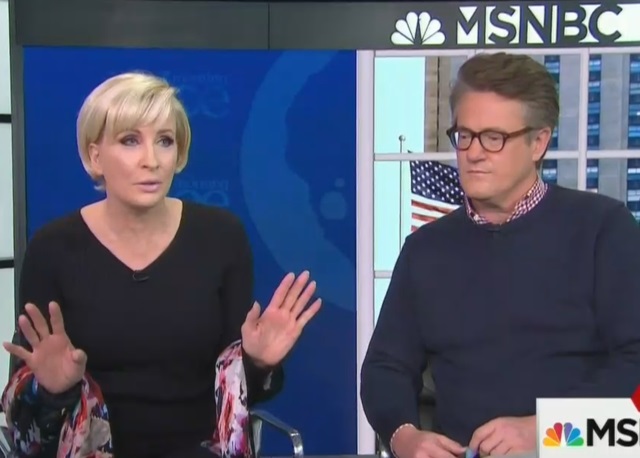 Mika Brzezinski is an unabashed liberal, someone who pushed Elizabeth Warren to run for president and subsequently became a Bernie Sanders fan. But she has also proved herself willing to criticize her own, be they politicians or, as this morning, fellow members of the MSM.

On today’s Morning Joe, Brzezinski first criticized CNN’s Jim Acosta for his pro-John Lewis speech in the guise of a question to MLK III after his meeting with Donald Trump. A bit later, she expanded on the point in a very pointed way: “we [in the MSM] decipher Democrats and make them sound great. And we make Republicans sound like complete—the word we won’t use.”

It was CNN’s fawning pro-John Lewis speech in the guise of a question to MLK III that sparked the conversation. The entire Morning Joe panel ripped Acosta, with Mika calling his stunt “troubling.”

A bit later, Brzezinski circled back to expand on her point, discussing the proclivity of the MSM to interpret and “decipher” controversial remarks made by Democrats in a way that is flattering to them. In contrast, the media will “cherry-pick” statements made by Trump and other Republicans to paint them in the worst light.

Note: Joe Scarborough ripped the MSM for burying the fact that John Lewis wasn’t telling the truth in his Meet the Press interview when he said that this will be the first inauguration he will not attend. In fact, Lewis also skipped W’s inauguration in 2001 for a very similar reason. In the wake of the Florida recount, Lewis claimed that W was not the true elected president.

MARTIN LUTHER KING III: Absolutely I would say John Lewis has demonstrated that he’s action. As I said, things get said on both sides in the heat of emotion. And at some point this nation, we’ve got to move forward. We can’t stay — people are literally probably dying. We need to be talking about how do we feed people, how do we clothe people, how do we create the best education system? That’s what we need to be focused on.

JOE SCARBOROUGH: That was a great answer coming off of a speech. I don’t know if the reporter was actually given a platform or not, a microphone. You all were both asking the same question about that question.

MIKA BRZEZINSKI: I’m not, I’m just going to say it —

JOE: Right. I was going to say the lawyer — excuse me, counselor, you’re leading your questions, repeatedly.

MIKA: Because then you could argue — oh my God.

KAY: We need a lawyer here.

MIKA: I think we’re just going to stay away from this. But that’s, that’s troubling.

MIKA: We have to wrap it up. Because I wanted to say something.

MIKA: I’ve been trying. I wanted to flush it out with Yamiche [Alcindor of the NYT.] She was explaining John Lewis, I think. I think that she was explaining that he’s so frustrated about voting rights and other issues that this was his way of expression, and she had to go.

Why is it that we can explain any Democrat and explain a statement that’s maybe untrue or inappropriate and explain it away and finally understand and translate for them, and yet we cherry pick Trump’s statements? That’s what I want to know. And I’m not even — I’m not a Trump supporter, so it’s not like — I just see a real difference here.

It seems to me that we are the ones who need to reset as well. And we need to look at both sides carefully. And you don’t ask leading questions about John Lewis and make a speech defending John Lewis when you’re asking a question, too. It is all over the place. Read the papers. We decipher Democrats and make them sound great and we make Republicans sound like complete — the word we won’t use. The word that Trump shouldn’t use and you brought up nobody should use. It’s unbelievable.

No, it isn’t “unbelievable”.

Everyone outside of your glass house looking in sees it plain as day, every minute of every day.

Mika’s right. Today’s San Diego Union-Tribune has a LOT of coverage of MLK day, all of it plainly written by Democrats, and it is full of misinformation (DJT only got 1% of the black vote, for instance) and also full of holes.

Missing from the coverage was DJT’s tribute to MLK yesterday,

“Today our nation pauses to honor a legend, an icon, and an American hero. The Reverend Dr. Martin Luther King Jr. lifted up the conscience of our nation — a towering leader in his day, and a lasting inspiration for all generations to follow.

Our Declaration declares that ‘all men are created equal,’ and Dr. King challenged our nation to live out that sacred truth: to banish the evils of bigotry, segregation and oppression from the institutions of society and the hearts of men.

His legacy of freedom is the true memorial to his life: no testimonial can pay better tribute than the faces of young children living out their dreams.

But his work is not done: all around us today we see communities and schools falling behind and not sharing in the prosperity of American life. Each of us has a solemn obligation to ensure that no American is left behind — and that all Americans are fully included in the American Dream. When young Americans of color are left on the sidelines, our nation is denied a lifetime of contributions to this society — and when any of our American brothers and sisters is forced to live in fear, or poverty, or violence, it is setback for the entire nation.

We rise and fall together, and today we pledge to follow in Dr. King’s footsteps so that all Americans may know the full blessings of this God-blessed land.

and his history of forcing integration of his private golf club.

Meanwhile, Clinton supporters seem to have forgotten that the Clintons paid for had a membership in a segregated golf club, and Bill had to be shamed out of playing there.

This time around, the smart blacks voted for the civil rights pioneer.

“Blind pig finds an acorn every once in a while.”

We actually owe a debt to the MSM – but for their corruption and lying, we might never had built the momentum to put out the hacks of GOPe and elect Donald Trump.

One of history’s greatest backfires.

Hopefully, Trump will follow through and throw them out of the White House and put them alongside bloggers in their new accommodations, marginalizing them.

What the MSM doesn’t get is that this behavior is going to completely justify Trump throwing them out of their “safe space” in the white house, and into a big room where they have to compete with bloggers for attention.

I would LOVE to see a news conference where Trump ONLY allowed all the new bloggers in the room to ask questions, and ignored the MSM completely. And then had the Secret Service toss Acosta out on the lawn, just on general principle!

When Mika is the voice of reason you know that the Democrats are out to lunch.

Where do you get the idea that Mika was a fan of Bernie Sanders? I watched that show a LOT during the campaign and her discussions of Sanders, brief as they were, were almost snickering along the lines of ‘he can’t win, isn’t this cute’? She shilled for Hillary within a day of calling her a liar over and over again, their network allowed The Donald to call in and spew his bile all he wanted while they asked softball questions because he was so entertaining and good for ratings… the daughter of Zbigniew is all over the place and seems to have the political and foreign relations education of a junior high school student. Not what you’d expect given her background, but then again she’s only there because of who she knows, not what she knows, and I guess a mega million dollar salary lets you know when to keep your mouth shut.

Here are links to articles demonstrating Mika’s support of Sanders:

July was a little late to be ‘supporting’ him given the egregious ass-kissing of Hillary over and over again. What if Bernie had been given the same amount of free coverage as that disgusting orange pig we’re planning on inaugurating? He should have been laughed out of the room when he submitted that self-written ‘physical exam letter’ from his amphetamine dealer. Now we’re actually going to go through the bother of inaugurating him at great expense, then immediately impeaching him (alternate CIA plan, blowing his head off) only to end up with Pence, which might have been the plan all along. I’m sure I saw Mika repeat that crap about ‘a socialist can’t be elected’ plenty of times early on, when it counted. No word about an idiot being elected, or a criminal, as Hillary obviously is.
Your links use strong words like ‘blasted’, ‘pleads’ and ‘furious’ – the actual content is a lot milder than that. Click bait headlines.

Paragraphs are your friend, and sending smoke signals are not your specialty.

Ah. I’d forgotten that Trump supporters can’t read anything longer than a tweet.

That should be, “Ah, I’d forgotten that Trump supporters can’t read anything longer than a tweet.” to match up with your superior intellect and articulation skills. At least, you remembered to capitalize the proper noun.

Us Trump supporters are so dumb, that we blew away the GOPe, and now control the White House, arguably the House of Representatives and the Senate.