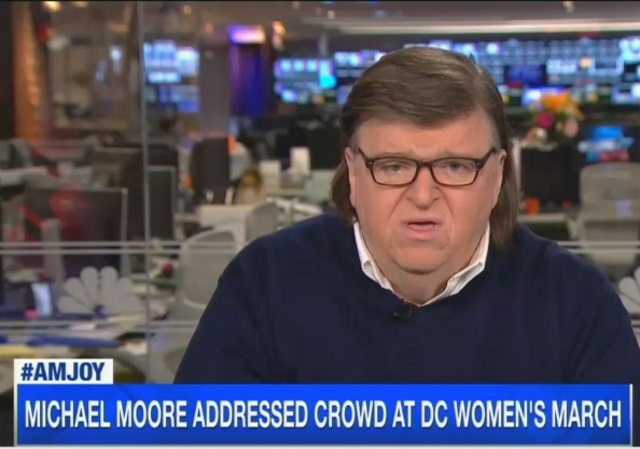 Talk about mansplaining . . . could Michael Moore possibly have been any more patronizing and condescending to women? Appearing on Joy Reid’s MSNBC show this morning, Moore approvingly cited and adopted actor John Leguizamo’s proposition that women who voted for Donald Trump were “victims” who did so out of “ingrained misogyny and sexism.”

Those poor, confused women Trump voters who thought they had the ability to make decisions for themselves. The dearies didn’t realize that they had been subconsciously programmed and were nothing more than—to use a favorite Rush phrase—mind-numbed robots.

But not to worry, Michael will be there to guide those benighted distaff souls. Moore ended by piously observing that the high percentage of women who voted for Trump “just says that we’ve got more work to do and we’ll keep doing it.”

MICHAEL MOORE: I was at this one thing, John Leguizamo, the brilliant actor and comedian, Hispanic, he says I’m Hispanic and I always thought racism was our number one problem that we are going to have to deal with, but this election really showed that we’ve ignored the misogyny and the sexism that is still so prevalent and ingrained.

He needs a lobotomy as well as a dickotomy.

and put him on a fat free diet or a fat only diet, depending on whether you think he is ‘redeemable’.

Why make someone have to touch him? Nobody listens to this wothless tub of goo anymore.

As Ron White used to say: Ya Can’t Fix Stupid!!!

If he had a coherent and logical message it would be a start.

I suspect they are looking for a repeat of the stampede of Trump supporters to Hillary! after she declared them “deplorable” for supporting him….

Don’t tell them, but calling people bad names is not a good way to get them to see things your way.

Michael Moore has been an extremely good source of guidance for me. I just look at who he supports, and go the opposite direction.

Mr. Moore believes women are too stupid to explain their reasoning themselves.

If he really believes women are so stoooopid, why does he think they should have the right to unilaterally kill the unborn product of their procreation activities?

I’d maybe support universal health care if Michael Moore would immediately and permanently be committed to a psychiatric hospital.

I’m so tire of being told I’m a victim and in this case incapable of thinking for myself.

What do you have against mentally ill people? Make it Gitmo.

This idiot lard ass lives up the road from me. I’d apologize for him but he’s like an intestinal growth deep within the colon; not something we really want. He lives in a liberal bubble enclave of private mansions. Wonder with all the problems in Flint why he didn’t move up there and tell them how to run everything.

He marched yesterday, and is Exhibit 1 for this observation: Trump has gotten more fat people walking in one day than Michelle Obama did in 8 years.

He probably thinks that our sons and daughters are the foot soldiers of Mother Nature’s war on women.

Men and women are equal and complementary. That shouldn’t be controversial.

Got it. Thanks, Mike!

What a hideous, smug, condescending prick. It amazes me that he has made it this far through life without getting his head smashed like a melon.

Keep it up MM. That dismissive, condescending, attitude toward the nation’s backbone is what got Trump elected.

That’s not mansplaining, which requires a man. That’s moronsplaining.

And I suppose he thinks he’s just a victim of his fork?

He can go fork himself.

You could jab a dinner fork all the way in and still be a foot and a half from a vital organ.

So, my read on this is that it is a #Occupy redux

Michael Moore is a fraud, a liar and a vile propagandist for fascism.

The only thing Moore is a victim of is donuts. May he eat his last one and then explode in Chelsea Obama’s face.

To: Linsey Graham: We KNOW you don’t know what America First means. Just vote the way Trump tells you to and please shut up. Your neo-con tag team w/ McCain is worn out.

Who could look at Michael Moore without thinking, “now there’s a guy that HAS to know a lot about women?”
.
Now, replace ‘women’ with ‘pork fat.’

Good to know I’m a victim, now I don’t have to worry about that white privilege anymore.

No.
You don’t get out of your white privilege that easily. Go do some penance. Either you suffer, or if you’re rich, you have somebody suffer for you.

For example, in Colorado 25% of electricity must come from renewable sources. So make poor people pay more to buy renewable electricity from a company you own, which has received government loans and subsidies for starting up and operating.

More evidence that liberals’ end game is not tolerance, but ideological lockstep. If someone disagrees with Moore, they are to bullied, vilified and ridiculed until they capitulate. His temper tantrums harm his cause so if he wants to keep stepping on rakes, I won’t stop him.

Except for actual Trump supporters, NO ONE is happier about Trump’s election than Michael Moore. The Democrats sent him off to Elba for the last eight years. The only Bush-era agitator left to stew in more irrelevance was Cindy Sheehan. Now, all of a sudden, he’s going to be in hot demand once again. I bet we see at least two anti-Trump “documentaries” from this fat sack of crap before Election Day 2020.

“False consciousness of the proletariat, comrade!”

You nailed it! Wish I would have thought of that.

The solution is re-education camps–or why not gulags? 😉

It’s become a sort of twisted fun to watch the liberals rail against everything they themselves have become.

Professor of women’s studies Mike Moore wants to tell every woman that doesn’t toe the liberal line that they’re too stupid to know how stupid they are.

Actually, in a sense there was “ingrained misogyny and sexism” involved. But it was on the side of Soros and his minions that funded that crappy march. The ‘sexism’ part is that these women want to be superior to their male comrads and the ‘ingrained misogyny’ part is that many of these female exhibit extreme penis envy – which results in the misandry also on exhibit.

Please stop giving Moore free advertising.
He continues to say more and more outrageous things just to get his name in the paper.