Trump told him to cancel if Mexico will not pay for the wall. 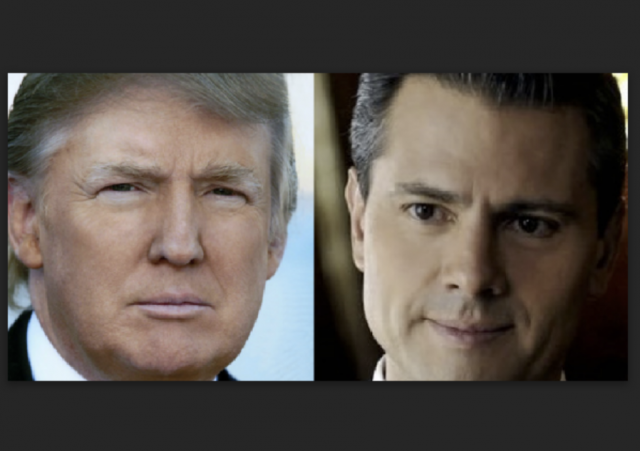 Mexican President Enrique Peña Nieto has canceled a trip to the United States after President Donald Trump told him to if Mexico refuses to pay for the border wall.

Translation: This morning we have informed the White House that I will not attend the meeting scheduled for next Tuesday with the @POTUS.

On Wednesday, Trump signed an executive order for the Department of Homeland Security to immediately start construction on a border wall. He told the press that Mexico will ultimately pay back us taxpayers for this wall.

Nieto responded that Mexico will not pay for a wall since the country “does not believe in walls.”

The U.S. has a 60 billion dollar trade deficit with Mexico. It has been a one-sided deal from the beginning of NAFTA with massive numbers…

of jobs and companies lost. If Mexico is unwilling to pay for the badly needed wall, then it would be better to cancel the upcoming meeting.

“We’ll look for a date to schedule something in the future,” Spicer told reporters as he exited Air Force One in Philadelphia, where Trump was attending a GOP retreat. “We will keep the lines of communication open.”

Mexico doesn’t believe in walls on its NORTHERN border.

There… fixed that for you.

We’ve been at war before with Mexico, and as I recall we won.

Pretty sure we can do that again.

They like us as long as we give them money and take their people, and ask for no respect in return.

It’s better than paying for every one of their children to be born, fed, clothed and schooled, on our dime, while our families have fewer children so they can afford to pay the taxes for the foreign graft.

Yes, we did have a war with Mexico, and we did win. We took half of Mexico’s territory in the Treaty of Guadalupe-Hidalgo, that ended that War. And here’s what Ulysses S. Grant, who fought in that War, said about the whole affair years later, in his Memoirs:

“Generally, the officers of the army were indifferent whether the annexation [of Mexican territory] was consummated or not; but not so all of them. For myself, I was bitterly opposed to the measure, and to this day regard the war, which resulted, as one of the most unjust ever waged by a stronger against a weaker nation. It was an instance of a republic following the bad example of European monarchies, in not considering justice in their desire to acquire additional territory.”

The US, as victors, paid Mexico for the land. Yes, it could be considered imperialistic but there were issues with Mexico prior to the declaration of war.

Yes, there were issues before the War: Like the US’s making a state out of Texas, which Mexico still considered a rebellious province. And Grant (I’ve already quoted his words) was well aware of the points you raise, but still considered the War as well as the acquisition of Mexican territory unjust.

But was totally down with war crimes against fellow Americans.

and as I recall we won

Yes, but it was expensive.

By the treaty of Guadalupe Hidalgo, the US paid Mexico $15 million and took responsibility for claims against Mexico by US citizens. The US also returned captured Mexican territory (things like Mexico City). It gained California and chunks of New Mexico, Arizona, Nevada, Utah, Wyoming, Colorado, and I may have forgotten a few.

So basically, by winning the war, the US won the right to buy some territory. I can’t think of another situation in history quite like that; usually the victor just keeps most of what he’s conquered.

Just to liven things up, Trump might do a bit of that “art of the deal” stuff and offer to sell them back some of California. (Of course, prices have gone up a bit since then.) The wailing and rending of garments by the press would probably last for the rest of the year.

“and offer to sell them back some of California”

No, by winnging the War (which Grant considered thoroughly unjust), the US won the “right” to make Mexico an offer it couldn’t refuse. As I told alaskabob, Grant was aware of all of the excuses you’ve made, and still condemned the acquisition of Mexican territory.

Wasn’t Grant as president a raging alcoholic. Not the best source for political advice.

The next step is to suspend all electronic bank transfers from the USA to Mexico. When that happens there will be daily front page stories on Carlos Slim’s blog(NYTIMES).

I would suggest a minimum tax of 100% on monies transferred. That ought to get them to think things through a little more closely.

Kind of refreshing to see the Mexican President not come to the US. The last one chose to chastise the US from Washington.

Peso tumbles on the news.

How cute. The mouse thinks it roars.

How much plainer and simpler could it possibly be? The Mexican government engenders a social and political environment that forces poor Mexicans to flee in search of a better life in the promised lands to the North. The Mexican government also does nothing to prevent this from happening. Only in the deranged fantasies of liberals is constantly being overrun with illegal aliens (oh, sorry: “undocumented immigrants”) a good thing. All the bobbing heads over the last 40 years has done nothing to reinvigorate the Mexican economy to give Mexicans a reason to stay, and prevent them from becoming someone else’s problem. Yes, Mexican immigrants (legal US citizens or not) do fill lots of jobs many other US citizens want nothing to do with, but until someone develops a magical elixir to make the legal immigration process equitable to both sides as well as more streamlined, then what other choice is there but to build a wall—innefective as it will undoubtedly be?

No worries; it’s in the United States Code that way.

A country that could be great but it has extremely corrupt government and institutions.
It could be Canada with much better weather, access to shipping, tollway between North and South America, etc.

as I understand it, there is NET emigration (i.e., OUT of the US) by Mexicans. So, bullshit to a lot of the “fake news” being echoed here.

“The U.S. has a 60 billion dollar trade deficit with Mexico. It has been a one-sided deal from the beginning of NAFTA with massive numbers…

Which I understand is about the same as our “trade deficit” (a term for demagogues) with Sweden.

Leslie’s all “rah-rah” about the Peso falling. That’ll be swell! Let’s impoverish Mexicans MORE…!!! They will be sure to stay in their own country than. Right…???

Some of you people…

We’ll see how it all plays out, but I am worried that “our side” will become the ones consistently smacked upside the head with the “unintended consequences” plague of the left.

Thinking things though and evaluating impact, ripple effect, clear and logical results is something that we (and the Trump admin) need to do now more than ever because it’s always been one of the strengths of the right. We didn’t hop on the “sounds good, feels good” bus and blindly flail around while focused only on the moment.

canada spent billions building a bridge into US mexico will, in one form or another, pay something for a border wall.
probably won’t be much though as congress will probably give them an out.
don’t care, money well spent.
then its time for a wall on northern border. blame canada….south park song.
aye.

Actually what President Trump told Nitro was “bring your wallet and a large tube of KY”.

It is time for Americans, Mexicans, Russians, French, Italians and American Indians get something’s through their heads. All lands in this world has belonged to different people since the beginning of man. Most if not all has been reclaimed by different people since the man has moved due to population increases and the need for more land to servive. The United States owes nothing to any of the world countries or people who might of had claims on portions of this country. Stop, be greatful that The United States has not had the ambitions of the Conquistadors or many other conquering armies that have acquisitioned land over the centuries by completely desrtroyng complete populations of people. We are a country that leads the world. Mexico, take your people back and we will build the wall to stop illegal occupation of our lands by an ungreatful , undeserving country such as Mexico. Obama is no longer in power and his willingness to distort this country is also over, thank God.

You forgot to include Palestine and the riff raff in this group. Other than that, I agree with you.

How does this factor in?

Trump did Nieto a BIIIIIG favor. Nieto was facing enormous pressure from people within his own country over securing the border and paying for the wall to do it. However, Nieto and every other knowledgeable Mexican knows that the wall is going to be built AND that Mexico will have to pay for it in some fashion. That is why Mexican representatives were meeting with Trump representatives even before Trump was inaugurated. Now Trump promised to have Mexico pay for the wall. And Nieto has sworn that Mexico will NOT pay for the wall. If they meet, the press, in both countries, is going to demand to know if Mexico is going to pay for the wall. And, neither man wants that to happen until the have an agreement. So, Nieto states he will not agree to pay for the wall and Trump says that if payment for the wall is not open to discussion, then Nieto might as well not show up. Nieto agrees and the meeting is cancelled. Both men gain breathing room and both can essential appear strong and blame the cancellation of the meeting on the other.

Now, securing the borders, especially the southern border, is critical for the US. Not only is it a highway for undocumented aliens [they become illegal aliens when they cross the border], who then become direct competition for Americans in the job market as well as a drain on social services, but it also allows for the uncontrolled importation of our enemies and debilitating drugs.

Mexico has been loath to provide any assistance to the US to secure this border, as the Mexicans benefit from the open border which exists now. That is changing. If Mexico will not assist willingly, then it will do so under duress.