“will not fairly enforce our nation’s laws” 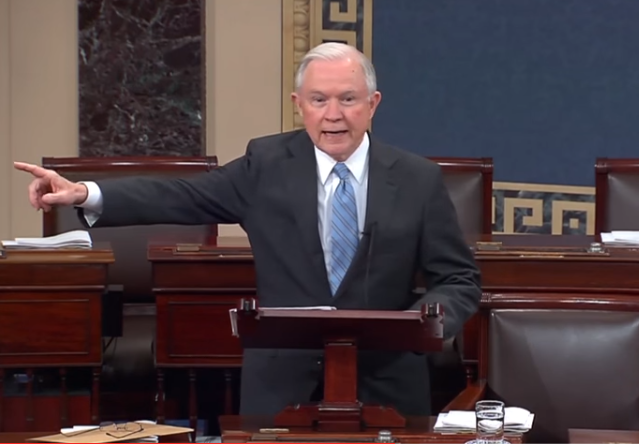 More than 1,300 law professors from across the country have signed a petition calling on the Senate Judiciary Committee to reject Sen. Jeff Sessions’ appointment as Attorney General.

The petition cites allegations of “prejudice against African Americans” by Sessions, charges which cost him a federal judgeship in 1986, as grounds for a rejection, though few of the claims made against Sessions appear to have been confirmed.

Nonetheless, the petition argues that “nothing in Senator Sessions’ public life since 1986 has convinced us that he is a different man than the 39-year-old who was deemed too racially insensitive to be a federal district court judge.”

While Sessions’ colleagues at the time did in fact accuse him of using the n-word and joking about the Ku Klux Klan, the Alabama senator continues to deny those accusations, saying he is “not the Jeff Sessions [his] detractors have tried to create.”

“I am not a racist. I am not insensitive to blacks,” he declared emphatically, according to The Washington Post. “Racism is totally unacceptable in America. Everybody needs to be treated fairly and objectively.”

Still, though, the petition plainly asserts that the law professors “are convinced that Jeff Sessions will not fairly enforce our nation’s laws and promote justice and equality in the United States.”

A Fake News story of 39 years ago continues its malicious trip through the minds of liberals.

They probably fear that he might enforce 14A as written.

Breaking news…..!300 law professors to fricking stupid to be professors.

Y’know scurrilous and false attacks in the nominee for chief USl law enforcement officer seem to be conduct prejudicial to the administration of justice. Perhaps a disciplinary complaint about the signatories would be in order? After all, it ciolates Rule 8.4(d).

My major concern with sessions is that he appears to be very pro civil forfeiture which has its own due process issues (that have been ignored by the SC, at least lack the robust protection granted in the constitution.