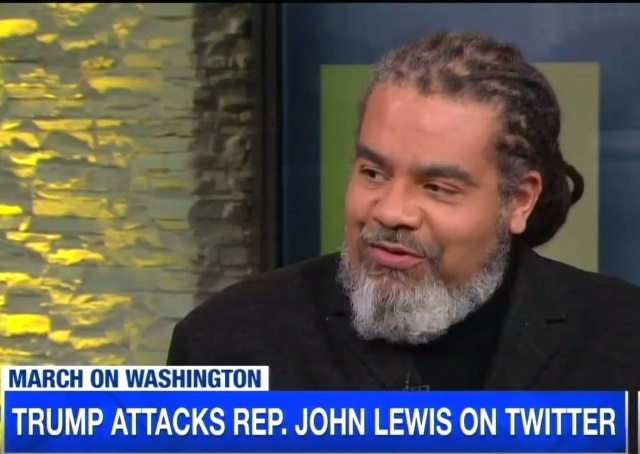 How puerile can progressives be? Childish enough to taunt someone over his name, and even ascribe ideological views to a person based on his moniker. And here we thought liberals prided themselves on never judging people on their superficial characteristics.

Even if Thompson views naming a child after Confederate heroes a sin, would the Right Reverend really want to visit the sins of the parents upon the child?

JOY REID: Are you concerned about having Jefferson Sessions replace Loretta Lynch?

REID: I mean, she’s leaving, the Eric Garner case is still open. You still have consent degrees in places like Cleveland, which who knows if he’ll continue them?

REID: Are you worried?

MARK THOMPSON: Very much so. Jefferson Sessions — I said it right this time.

THOMPSON: I didn’t say Jefferson Davis. He’s a Confederate Attorney General. And as John Lewis said so aptly the other day, he can be nice and friendly, but we know what his policies have meant and what he’s been up to throughout his tenure, so I think we do have to be very concerned about that.

That was very sly Mr. Fox.

And here I thought Congressidiot Lewis was the dumbest human on this planet, so dumb he could hardly figure out how to make gravity work, and then along comes Mark Thompson.

You sir are not giving Sheila Jackson Lee credit for her smarts.

JOY REID: Are you concerned about having Jefferson Sessions replace Loretta Lynch?

Ooh! Ooh! Loretta Lynch has lynch in her name!

Everywhere such people look, they’re surrounded. It’s like there are no “safe spaces” left.

But from where I’m sitting, it’s still the

[class] diversity. Judge people by the “color of their skin” is an important doctrine of the Pro-Choice Church to which Progressives and Liberal flock to.

Bigotry on display. Nothing unusual. Just liberals being liberals.

Joy Reid is a moron.

Lewis is a parasite. And a moron.

If you consider MSNBC to be analagous to a Democrat run city, then Sunday Mornings with Joy Reid are definitely the Ghetto.

Ooh! Let us all play this game.

Mark – a derivative from Mars, Roman god of war.

Thompson – son of Tom, and the name of a submachine gun associated with Prohibition era gangsters.

He is named after 2 Confederate racists who were enemies of the country. Jefferson Davis and Pierre Gustave Toutant Beauregard.As well as the co creator of the DEMOCRATIC Confederate flag you conservatives love and defend.