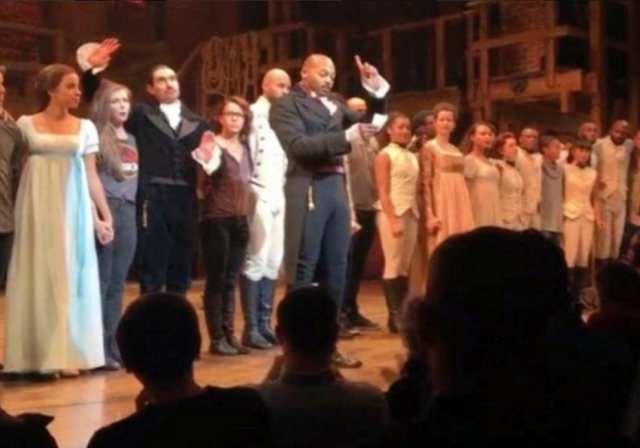 You may remember that right after the election, Vice President Elect Mike Pence attended a performance of the show ‘Hamilton’ where he was booed by people in the audience and given a sanctimonious lecture from the stage.

The creator of ‘Hamilton,’ Lin-Manuel Miranda, didn’t deliver the speech to Pence, but he wrote it and no matter what anyone says, it was intended as a dig at Pence.

Flash forward to now. Obama has granted clemency to convicted terrorist Oscar Lopez Rivera and Lin-Manuel Miranda couldn’t be happier about it. He’s even going to do a special performance of Hamilton for the man.

Hamilton creator Lin-Manuel Miranda might not be the biggest fan of vice president-elect Mike Pence, but maybe that’s only because Pence never took part in a bombing campaign against the United States government that murdered five people and maimed countless others.

There’s no point in spending too much time rehashing the entire Pence-Hamilton controversy here, so I’ll just highlight two important aspects to keep in my mind. The first is that it was Miranda himself who wrote the speech and asked his friend and co-star to deliver it. The second is that it’s largely irrelevant whether the speech was intended to condemn Pence (they insist it wasn’t, even though, c’mon, it certainly was). The result of their display was to make it perfectly clear to Pence and anyone who shares his views that the price of admission was condescension.

Which brings us to Miranda’s stance on another man that others might find… dare I say, deplorable?

Y @MMViverito, when you talk to Don Oscar, díle I’ve got a show for him in Chicago. It’ll be my honor to play Hamilton the night he goes.
????????

As Townhall points out, Rivera is not sorry for his crimes:

While this was definitely overshadowed by Chelsea Manning’s pardon yesterday, it’s certainly noteworthy. In addition to Manning, Obama also pardoned Oscar López Rivera, a Puerto Rican nationalist who was convicted of seditious conspiracy, use of force to commit robbery, interstate transportation of firearms and ammunition to aid in the commission of a felony, and interstate transportation of stolen vehicles.

Lopez Rivera is a Puerto Rican nationalist and a member of nationalist group Fuerzas Armadas de Liberación Nacional Puertorriqueña (“FALN”), who sought independence for the island territory so that it could become a socialist nation. FALN orchestrated a series of bombings that killed six people. Rivera functioned as a bomb maker for the group and helped to recruit others.

Lopez Rivera was sentenced to 51 years in prison in 1981, and an additional 15 years were tacked on to his sentence after he attempted to escape from prison in 1988.

Twitter user Neontaster has created an updated version of the Hamilton poster:

Yo @Lin_Manuel, I made a poster for the event: pic.twitter.com/02Olxv9s31

Is there a terrorist these lefties wouldn’t blow?

Just the dead ones.

Bill Clinton was going to release Lopez-Rivera, but didn’t because he refused to denounce terrorism. Barack Obama put no such condition on Lopez-Rivera.

The release of this guy may have more to do with Obama’s anti-Americanism, than sympathy for the guy. The new Governor of Puerto Rico has stated that statehood is his priority. Obama probably wants this terrorist to go home and fight for independence.

To pay to attend this or any other Broadway show, let alone pay any attention to any of the people involved in their finances and production is to fund and enable terrorism in the United States.

What annoys me the most about “Hamilton” isn’t the politics, or what those associated with it may or may not do offstage. Allow me to preface this by saying that I love all kinds of music, I adore all the great Broadway musicals, I like classical, I like rock, I am mesmerized by Phillip Glass pieces, I adore Rachmaninoff. I could go one, but you get the point.

People in NYC are falling all over themselves to give Tony’s to Hamilton because it is “socially relevant” or whatever, but the simple truth is – As Music, it is Total Crap. That’s the bottom line. The lyrics are interesting, I’ve read them, and tell a good story. I get that they’re trying to do some rap themed recitations – but a good composer could have worked that in with some actual memorable melodies. Not a single one in the entire piece. C’mon, even Disney does better than that with it’s fluff, just look at Frozen.

The musical score of Hamilton is amateurish at best, incompetent drivel at worst, and most glee club organizers could have dashed out a better effort on the back of a napkin in the high school cafeteria.

So Miranda has the hots for a mass murderer. He probably thinks Hitler and Stalin were boffo as well.

Leftists have to be leftists.

Funny thing about the whole Hamilton thing is I don’t believe any of these “Hamilton” supporters really understand or would support Hamilton in his time. This is another history rewrite by the lame stream media and liberals.