“Texas can’t change federal immigration laws. What Texas can do is to enforce existing law.” 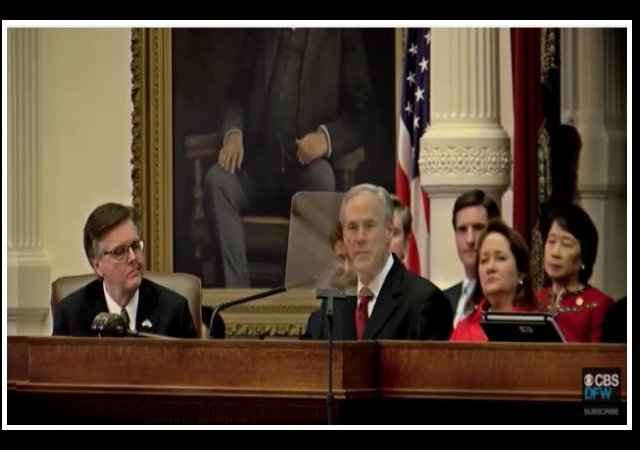 Texas Governor Greg Abbott has declared a ban on sanctuary cities in the state. He stated that elected officials do not get to choose which state and federal laws to enforce:

“As elected officials, it is our responsibility to protect all Texans,” Abbott said during his State of the State speech today in Austin. “It’s our burden to deal with the consequences of the federal government not doing its job to secure our border,” Abbott continued.

Today I declared banning sanctuary cities to be an emergency item in Texas. We'll get this done & penalize the offenders. #txlege

Abbott listed this decision as an emergency item, “allowing lawmakers to take quicker action to address them.” Usually lawmakers cannot vote on “legislation during the first 60 days of the 140-day session.” But these rules do not apply to emergency items.

Last week, Abbott threatened to cut funding to Travis County if Sheriff Sally Hernandez did not enforce the laws on the books. Hernandez had decided that her department would reduce its work with federal immigration authorities. She would make an exemption for serious crimes, though.

Abbott gave her until February 1 to comply or face sanctions.

Abbott also said he intends to maintain state-funded security along the Texas-Mexico border, though he hinted that federal officials may be poised to step up their presence in a move that could allow Texas taxpayers to trim their current $800 million investment.

He said he plans Wednesday to meet in the Rio Grande Valley with federal officials to discuss their new efforts, which President Trump has said will include thousands of additional immigration agents and the construction of a border wall.

Abbott has also threatened to cut funding to any state college that offers sanctuary. Students at the University of North Texas and Texas Woman’s University demanded each school “follow the model of sanctuary cities like Los Angeles and Chicago.” Abbott said no way.

Texas will not tolerate sanctuary campuses or cities. I will cut funding for any state campus if it establishes sanctuary status. #tcot https://t.co/2wN4eo1YLG

If he is, this is his ONLY term.

Watch and see how T-rump deals with DREAMERS…

If it’s part of a comprehensive solution, then there’s not much problem with cutting a special deal for the so-called “dreamers”. It would have happened years ago, because its a very sympathetic issue, but Republicans wanted to hang onto it as a bargaining chip to force concessions from the Dems on tighter border security and deportation of the true bad actors.

The basic form of a viable border security bill has been obvious for years; build a wall, beef up security, deport the worst, work permits for a larger number, path to citizenship for the dreamers. Nobody ever gets everything they want, so you pick the stuff that you can compromise on while getting most of what you want. Border Security, important. Wall, important. Getting rid of criminals, important. People who’ve been here since they were small children and have no criminal record? I don’t see how that improves my security to go after them. So, let that one go in order to get the deal done.

If you think that the Latinos who are citizens (or even green card holders) WANT the influx of illegals that the Democrats encouraged, think again. Go talk to low-income LEGAL Hispanics and you’ll get a different point of view.

The headline and story misreports their source. Abbot has not banned sanctuary cities, because he can’t; only the legislature can do that. He has proposed a ban, and designated his proposal as an emergency item so that the legislators can take it up immediately, without having to wait 60 days as they would for any non-emergency proposal. Now let’s see them ban it, which they can do. In the meantime all he can do is cut off funding (which is more than Trump can lawfully do), which is why he’s about to do so to Travis County if they don’t comply by tomorrow. If the legislature passes his proposed ban then he will be able to take enforcement action against Travis.

Can’t be done, any more than you can be made liable for such crimes.

Even cutting funding is very narrowly restricted at the federal level before you run into the constitution; only the state can do it.