Looking for love in all the wrong places 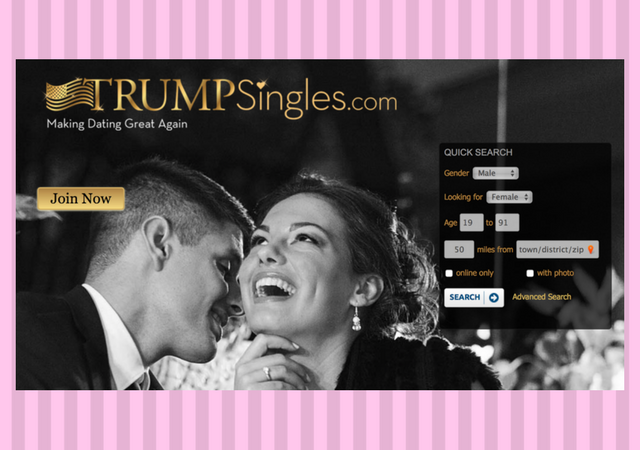 I’m not one to knock online dating sites since I met my husband on the interwebs, but candidate-centric dating is just a tad bizarre and probably not a recipe for relationship success.

But since the overly politicized life is all the rage, TrumpSingles is also apropos:

For American singles who have fallen in love with presumptive Republican nominee Donald Trump but have been unlucky in their own love life, TrumpSingles is here to play cupid.

The idea for the website came from David Goss, 35, when the lifelong Republican was socializing with his other conservative friends in February, according to the New York Post. TrumpSingles says its goal is “making dating great again,” a twist on Trump’s own catchphrase “Make America great again.”

“I think there’s a special stigma when people say they’re supporting Trump, because of some of the brash things that he’s said,” Goss, an associate TV producer based in Santa Clarita, Calif., told the paper. “That immediately gets (projected) on his supporters, and it makes it hard for them when trying to date.”

TrumpSingles has attracted about 500 users, most of them in Washington, D.C., New York and Los Angeles, since it went live in May. The site, which also has a mobile version, allows users to search for their perfect Trump match by inputting their gender, age, location and favorite way to spend time.

With only 500 users, the pickings might be slim. But there’s certainly credibility to the argument that people have been unfairly maligned and labeled simply because they cast a vote for Donald Trump. Whether or not that should permeate your love life is a completely different matter though.

They’d have better luck with a Trump-branded Russian mail-order-bride site.

Maybe they should consider a lease. Putin says Russian hookers are superior to American hookers.

He claimed they were the best in the world.

There may be something to this though. My dear sister, an avowed liberal to her core, has been dating a guy for almost 2 years but she’s told me they could never really be serious because (said in a conspiratorial whisper) “He’s a REPUBLICAN!!” (Remember to hiss as you say “Republican”.) Other than that she says he’s perfect.

On the bright side, at least you know Rosie O’Donnel won’t be hanging out there.

What do you have against Washington Redskin football?

Not a bad idea.

A life free of clinging jerks is a laudable goal.

A Hillary supporter? Just Say No! A Bernie fan? They’re more foolish than evil, so be more polite to them, maybe; just say no, thank you.

If it filters out the terminally selfish, the incorrigibly stupid, the militantly unreflective, the excessively needy, career crackpots, or the criminally inclined … well, what’s the down side?

I dunno, do you think single women who like Trump might be looking for a guy that’s…well, YUGE?

She’s going to be lonely.

There are several thoughts about this.
There were several stories during the election about it putting strains on relationships. Hell, there were some stories of antiTrumpsters giving gifts of “we donated to the DNC/BLM/ etc in your name” cards to Trump supporters. ( Which would get said person in trouble with me as I would view it as pretty petty. )

So checking out the political affiliations of a person before dating might not be bad.

People arranging dates through this site would be wise to exhibit caution. A person might leave a bar with a rather nice woman, then wake up tied to a bed with Rosie O’Donnel and Kathy Bates standing over them.

Good idea. That way they don’t try to breed with normal people.

Putting on my Grocho glasses I’ll happily breed with Ivanka anytime she wants.

“Then we opened a bottle of wine, put on some Enrique Iglesias, and spent the night reading Trump’s tweets.”

Ok, fine, I’ll grudgingly admit that I do prefer TrumpSingles to SyrianRefugeSingles