We Europeans ‘celebrate when walls are brought down and bridges are built,’ EU Foreign Minister Mogherini tells President Trump 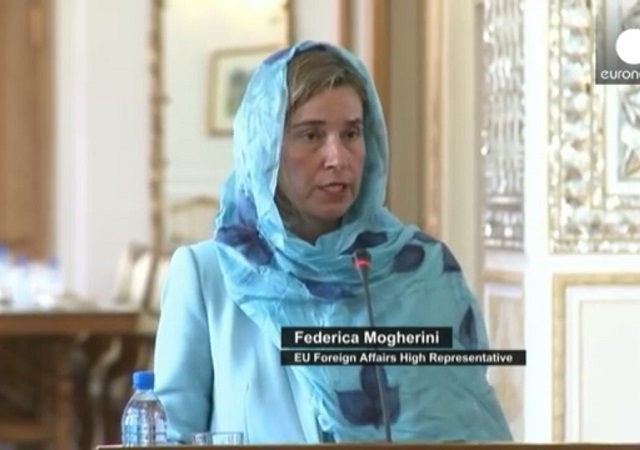 Mogherini warned President Trump that he would “end up being in a prison” for his executive orders, one which temporarily halted the entry of Syrian refugees and another which seeks to begin the construction of a southern border wall, UK newspaper Express reports.

Mogherini also lectured President Trump on European history and tradition, and on how Europeans celebrate “when walls are brought down and bridges are built.”

Italian politician Mogherini played a key role in negotiating the Iran Deal or the “worst deal ever negotiated” as President Trump pointed out. She began her political career with the youth wing of the Italian communist party and made it to the post of E.U.’s High Representative on Foreign Affairs and Security Policy as a member of the ‘Party of European Socialists’.

In a clear message to President Trump, who has made little secret of his disdain for the EU, Ms Mogherini warned against those who wish to build walls rather than bridges.

She said: “In Europe we have a history that has told that every time one invests in divisions and walls you might end up being in a prison if you build all walls around you.

“We have a history and a tradition that we celebrate when walls are brought down and bridges are built.”

Just as in the U.S., European media is describing President’s travel restrictions as a ‘Muslim Ban’. The fact that it targets passport-holders from Iran, Iraq, Libya, Somalia, Sudan, Syria, and Yemen for 90 days — countries based on security assessments conducted by Obama administration — doesn’t appear in the mainstream media narrative.

American Mainstream media lives in the same bubble as the European leaders like Merkel and Mogherini. They all want to ‘build bridges and bring down walls’. They also share a disdain for the working class which ultimately picks up the tab for their grandstanding and virtue signaling. With Europe in the midst of a self-inflicted migrant crisis, leaders like Merkel and Mogherini are indignant that the U.S. won’t follow them into the abyss.

For over a year, Merkel and other European politicians have been covering up their incompetence by telling people that borders can’t be secured and migrants can’t be stopped from swarming Europe. If Trump succeeds in securing the U.S. borders, it will be a political disaster for Merkel and her likes.

The Globalists will get us all killed

notamemberofanyorganizedpolicital in reply to gonzotx. | January 30, 2017 at 4:49 pm

Those Globalists are really grasping at last straws aren’t they…..

Love this comment of Professor Jacobson’s:
:For over a year, Merkel and other European politicians have been covering up their incompetence by telling people that borders can’t be secured and migrants can’t be stopped from swarming Europe. If Trump succeeds in securing the U.S. borders, it will be a political disaster for Merkel and her likes.”

These globalists are going to come begging for American Security to save them from Russia and for American Markets for their export dependent economies.

These people ***really*** don’t understand Trump. Otherwise, they’d realize this kind of thing feeds him and his movement like gas feeds a flame.

notamemberofanyorganizedpolicital in reply to Same Same. | January 30, 2017 at 4:51 pm

Just thinking along the same lines myself.

If Trump had wanted the “ideal” parody of bad bureaucrat nannies to open more European and American eyes…..

Well I don’t think EU plotters could have done any better.

More Winning! – for the World!

Can’t be said enough. RE: “They also share a disdain for the working class which ultimately picks up the tab for their grandstanding and virtue signaling.”

Don’t bite the hand that feeds you. If you want there to be a NATO, better be nice.

She’s a communist. She’d probably be happy to see Russian tanks rolling through the Alps.

She is wearing a hijab.

I do happen to remember too, that Americans risked and lost their lives in order to protect the lives of the “other” Europeans, and that American participation was key in defeating the “bad” Europeans.

Other than that, how did such an ignoramus ended up as “Foreign Minister”? [rhetorical]
Who’s gonna make the move to arrest and imprison the President Of The United States? So incredibly stupid!

notamemberofanyorganizedpolicital in reply to Exiliado. | January 30, 2017 at 5:04 pm

The Europeans also did a great job of keeping out “immigrants” – often with lots of walls – …well at least since that Gates of Vienna event…..

That says it all.
“Italian politician Mogherini played a key role in negotiating the Iran Deal or the “worst deal ever negotiated” as President Trump pointed out. She began her political career with the youth wing of the Italian communist party and made it to the post of E.U.’s High Representative on Foreign Affairs and Security Policy as a member of the ‘Party of European Socialists’.”

In other news, the Sun rose in the East…

It’s awfully nice of them to give us a few more reminders of exactly why American’s don’t want to be Europeans.

But really, they can stop now. That decision was made a few centuries ago, and we still think it was a good one.

Foreign nationals have no say in our immigration policies. She can whine all she wants. We’re not listening.

The people waging social justice built walls to force the refugee crises and bridges that would collapse underfoot stranding millions in the abortion fields.

Enforcing our borders and controlling our immigration is illegal? Who does that dumb broad think she is?

Misery loves company. The EU has just allowed themselves to be invaded by third world Muslims who are destroying their countries. Within 2 weeks of being inaugurated he sends the message that he is not afraid to secure the borders of the USA from the same invasion. Form their point of view, this must be incredibly embarrassing for the EU, at the best, and a real danger to plans for further invasion of the 1st world, at the worst.

Gee I dunno, does this mean they will actually kick us out of the EU?

If we believed that ‘Stronger Together’ nonsense, we would have voted for what’s her name.

Please kick us out of the UN!

Well, there are walls and then there are “walls”. Here she seems to be objecting to the legal, figurative walls relating to some particular”migrants” entering the US.

But there are some other “walls” she has no problem with…in fact she seems to like. I refer to the walls requiring certain Israeli products sold in some EU members (such as France) to be labelled. The label regulation defines certain regions as “occupied”…though Israel denies it…And then orders goods produced there as coming from Occupied territory or some such.

That wall, designed to attack Israel economically, is fine apparently. The BDS movement…another Anti-Semitic wall…gives rise to no threats of jail.

Going to lock-up our president, eh?

Go ahead and try to arrest the President of the United States of America.

Five million Americans flooded into the trenches in WW1 to save Europe’s ass. Then years later went back to save it again in WW2.

If it was not for America, you would be speaking German, well you probably already do, but I digress.

It’s not like he’s banning people from every Muslim country — Britain and Germany still don’t even require visas.

This woman who is so intimidated that she has to cover her head is telling us that we need to be like her. She represents the same group that told us that hillary would be out next president. She is one of the elitest that knows what’s good for us and we had better follow her advice. This is like a Nazi telling us that unless we hate Jews we are doomed. We just rejected that view in the US and Europe is about to do the same thing.

If Europe were to be invaded by Russia, their first call would be to….?

Politics is the ultimate reality show which Donald J Trump mastered long ago. His presidential orders are right on track, and brilliantly draws out and exposes the leftist wing-nuts, both in the US and abroad, making them such easy targets. He is so far ahead of the curve, by the time they realize their peril, it will be too late,

Found this link on another blog – I forgot about the EU building walls.

Exhibiting an appalling lack of appreciation for the irony of her statement and the underlying reason for Trump’s (this nation’s) actions. Idiot. And what is that she’s wearing, anyway? Oh…wait, she wearing an abaya…a suck up to the Izlamist, I suppose.