Tammy Bruce on the political implosion of the left. 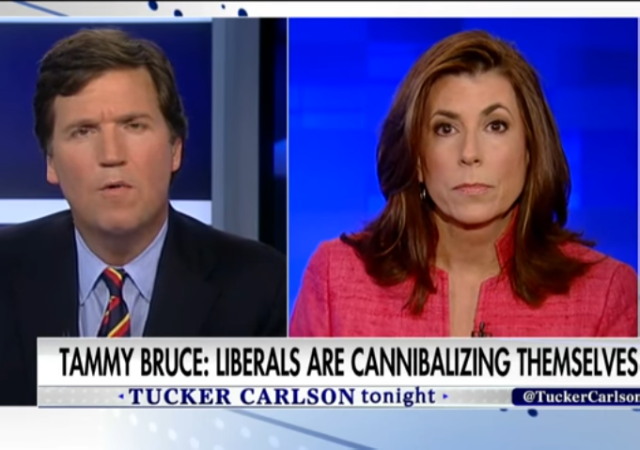 Tammy Bruce appeared on Tucker Carlson’s show last night and offered a unique analysis of the current state of the Democratic Party. Their conversation began with a viral moment from a recent forum for potential new chairs for the DNC. One candidate, a white woman from Idaho suggested as chair it would be her job to shut down other white people.

Sally Boynton Brown, a white woman running for chair of the Democratic National Committee, said Monday that if she is chosen to lead the party her job will be to “shut other white people down.”

“My job is to shut other white people down when they want to interrupt,” Brown said during a DNC candidate forum.

Brown, the executive director of the Idaho Democratic Committee, is running for the chair position against six other candidates, including three African-American candidates and one Hispanic, former Labor Secretary Tom Perez.

“My job is to shut other white people down when they want to say, ‘oh, no, I’m not prejudice; I’m a Democrat; I’m accepting,’” Brown bellowed during the forum, which was hosted by MSNBC’s Joy Reid.

Bruce described this as an example of the left eating its own and suggested it’s further proof that they’ve learned nothing from the election. You can watch the whole exchange below:

Tammy touched on the left’s continuing obsession with identity politics in a recent column for the Washington Times:

After everything that has happened in the last year, the Democrats still have learned nothing. Their answer to the election of Donald Trump? A Women’s March that does nothing to save a deluded party still cannibalizing itself.

Liberal leadership remains obsessed with imagery instead of solutions, working overtime to not face the fact that America has now rejected the scourge of political correctness and identity politics, both of which liberalism requires in order to survive.

With the media coverage surrounding the so-called women’s marches on Saturday you’d think we were watching some sort of organic, spontaneous uprising, much like, oh, the tea party. But it wasn’t. There has been excellent commentary in the days that followed exposing the fact that the march wasn’t about women at all; it was about leftist politics. And group therapy.

Yes, many, many people came out. Likely a million across the country. And that’s a good thing, but not surprising. For cities that Hillary Clinton won overwhelmingly, like Los Angeles and Washington, D.C., of course dejected locals turn out. When I was a community organizer on the left, we had great success in liberal cities.

I was hoping that President Trump wound name Tammy Bruce as Press Secretary.

*would name (always preview before submitting!)

The dem party is such a moron magnet.

The Democrat Political Party is going through yet another transformation. They’ve presented themselves as ‘the Party of the People’ but that lie was trounced by their inherent disdain of working Americans. They see themselves as being above the fray or uninterested in what matters in ‘Flyover Country’. Their candidates exhibit the sort of Socialist/Communist ideas taught to them during the ’60’s.

The result is a tired, aged and aging glitterati totally out of touch with the majority of this country. Sadly, the next generation coming behind them is worse.

I usually skim through D-Kos every couple of days, just to see what’s percolating over there, what the lefts mindset is. Sometimes you can glean some useful info – for instance, a couple of weeks ago they were all excited about the chances of voting down some of Trump’s nominees, today they just don’t talk about it anymore and at best hope they can slow down a couple. (Labor Sec. Puzder might be the only one they have a chance of getting to drop out – I had never even heard of him before the last couple of weeks)

It has been kind of entertaining to watch them drop so quickly into a state of “just oppose everything, we don’t need any ideas, just oppose!”. That’s where they are today. They don’t seem to understand that when events are going badly, then yeah, that can win you some dividends. But if things start to go well for the other side, then you are up sheeet creeek without a paddle. Which is where I think they’re going to be.

From another site the owner did a few guesstimate calculations (I didn’t check the math), which I’ve consolidated as it was kind of a long post – figuring 3.2 million protestors by NY Mag accounts, he guessing half of those participants had to come over a longer distance than locals. http://nymag.com/thecut/2017/01/an-estimated-3-2-million-participated-in-womens-marches.html

Admittedly the protests were all around the country and not including those overseas protest so his numbers aren’t going to be real close to accurate, but an interesting thought in any regard.

For the locals he estimated costs at $100, protest material, parking, food etc.

So after reading his guesses I can say President Trump is really ramping up the economy. Imagine if the women had donated that to their favorite recount effort! Jill Stein could have outdone Bernie’s house by millions!

Imagine if that had been donated to the needy.

Silly – liberals don’t donate to the needy, or any other charity for that matter. That’s what taxes and welfare are for!

While I’m enjoying the sight of the D’rats/Liberals/Progressives scurrying around like headless chickens, and enjoying it as much as anybody, it’s wise to keep in mind that the Republicans are normally even more confused and aimless than the Democrats. Without Trump’s apparently inexhaustible energy, the Republicans would lapse back into their usual ineffective torpor.

D’s still have a monopoly on Education, from K-grad school, so they’re still brainwashing our children and have been for decades.

Still have a virtually monopoly on the mainstream media.

Still extremely well funded, mostly with money that originates with taxes on us.

In other words: Still very dangerous.

It is ridiculous to call the Democrats a regional party. About 105 thousand votes in PA, MI and WI is all that separated a President Trump from a democratic president. So with the worst Democratic candidate in our lifetime, who obviously and openly lied to the American people about an illegal server and emails, a long history of scandals, and who couldn’t be bothered to even try to get white blue collar voters, Trump barely won—by 105 thousand votes out of almost 12 million votes!

What scares me is that the democrats will wake up and realize they need the blue collar-Midwest whites and we will get someone like Bill Clinton in 2020 who will “feel your pain” and along with lavish promises will take back the historically democrat voting Midwest. As long as the democrats are crazy and openly anti-white (whites need to shut up etc.) Trump can do okay, but hoping that they don’t nominate a sane candidate is a slim hope.

While I don’t believe they are a regional party, they are marginalizing their base by insisting on focused appeal. Having the people competing for the job of DNC chair openly portray hostility to white voters and male voters, they (the DNC) is taking identity politics to a whole new (and somewhat terminal) level.
The left has always decried that Pro-Life stances were a litmus test for the right and makes the Republicans the party of exclusion. What is different about what the DNC is saying? Check your privilege is as divisive as it gets and implies racism on those who do not support.
If the Democratic party seeks to win anything, they need to better understand mainstream America. I’m sure they will make half measures and expect the MSM to carry their water. But unfortunately for them (the Democrats), the MSM carries water like a colander.

They’ll be much weaker once the investigation reveals the degree to which they have rely upon election theft to do as well as they do.