A funny thing happened on the internet Tuesday night. The left wing sports site Deadspin, a creation of the now defunct Gawker, tried to mess with Senator Ted Cruz and got owned. Big league.

Here are the basic facts from CNN:

Deadspin previously drew scrutiny in 2013 for telling Donald Trump “go f— yourself.” At that time, Deadspin was owned by Gawker Media. It was acquired by Univision last year.

The Twitter exchange started when Deadspin asked its readers to send proof of Cruz playing basketball, apparently in an effort to verify a Politico article noting that he had started playing weekly basketball games with other Republican senators.

Cruz responded via Twitter on Tuesday night with a picture of Duke basketball player Grayson Allen, who bears a stunning resemblance to the Senator.

@Deadspin what do I win? pic.twitter.com/9XuRmmIkJS

Even the Washington Post has conceded that Cruz won this round:

Well, that took a turn, perhaps one we should have seen coming. Shortly after Sen. Ted Cruz responded Tuesday to a Deadspin tweet by making light of his uncanny resemblance to Grayson Allen, the website shot back in terse — and highly vulgar — fashion.

Deadspin had noted a Politico story from the day before about how, with Donald Trump in the Oval Office, Cruz is trying to “reinvent his role in Washington.” Part of that effort is a “weekly basketball game” that the former presidential candidate has started in a Senate office building, with Politico reporting that “Cruz is said to be a surprisingly good jump-shooter with miserable form.”

That prompted Deadspin to issue a call to its Twitter followers, asking for “proof of Ted Cruz playing basketball.” Cruz himself (or, more likely, someone running his verified account) replied to that tweet, humorously posting a photo of the Duke star.

Deadspin editor Tim Marchman is not taking the loss well:

Ted Cruz is a pathetic asshole, his social media intern’s joke was basic, and complaints should go to marchman at deadspin dot com.

Sean Davis of the Federalist notes that Deadspin did the same thing to Colorado Republican Corey Gardner.

This is almost as painful to watch as that time @Deadspin accused Cory Gardner of lying about playing high school football. pic.twitter.com/V6CTgoIUId

It was October of 2014 and we covered the story:

Deadspin, which is part of Gawker Media, ran a story yesterday that Cory Garnder, the Republican running for Senate in Colorado who is ahead in the polls, had faked his high school football career. 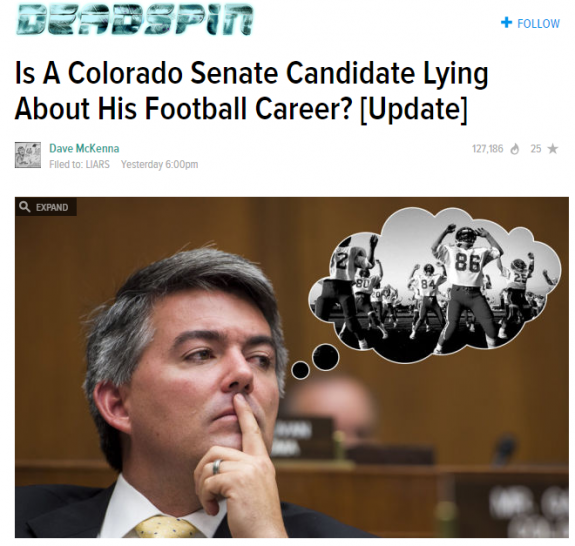 It was game over according to the cheerleading section on Twitter.

As they were high-fiving each other and ordering extra beers for the post-election celebration, a funny thing happened.  The story turned out to be false.

I never thought my unheralded sports career would make it onto @Deadspin pic.twitter.com/llKf62Z7UL #copolitics

In Cruz’s case, he was mocking Deadspin with a parody tweet. In the Gardner case, Gardner the photo was the real thing.

What hasn’t changed is Deadspin trying desperately to attack a conservative politician over sports.

Sorry, but where is Cruz “owning” Deadspin in this?

I do hope the decent R’s take notice – don’t take any shit from the prog media, fight back in everything big or small.

I can tell you don’t get Twitter, and I don’t blame you. Deadspin tried to score an easy layup on Cruz, assuming that nobody would bother refuting their premise, but Cruz trolled them with humor and grace, hoping to provoke an outsized reaction by poking them in the wound left by Cory Gardner. It worked beautifully.

Yep – for anyone who doesn’t “get it”, just read this thread:

and this is my favorite individual tweet of the day:

You need to see the 4th item in the Twitter exchange for the win. LI appears to have posted only the link to the pic, which was the entire response, no text.

This looks like the old problem of wrestling with a pig.

Even if you win, you end up covered in … whatever it is pigs roll around in.

Keep on being nice.

You don’t even have to uncover your eyes.

And they make good eating, too.

To me the real story here is how the editor is stepping into it. Is he looking to help the “little lady” that works for him? If so, not a good look for a progressive especially after the march of genitals across the country. Or is he just trying to gin up as much controversy as possible for attention and clicks? That says a lot about motive.

What is Deadspin? A nothing lefty web site that deals in hate speech to attack the right.

President Trump is kicking the butt hurt left. It’s only Wednesday and look at the news stream coming from the White House!

My guess we will see more garbage from them. That is what lefty’s do!

Correct, it’s a prog hate site which happens to be run by a bunch of little prog pansies who could never play sports in high school but wanted to oh-so-badly. Now they spend their adult lives harping on something they know nothing about, all while injecting their content with typical progressive bile.

Why is there a picture of Andy Robinson?