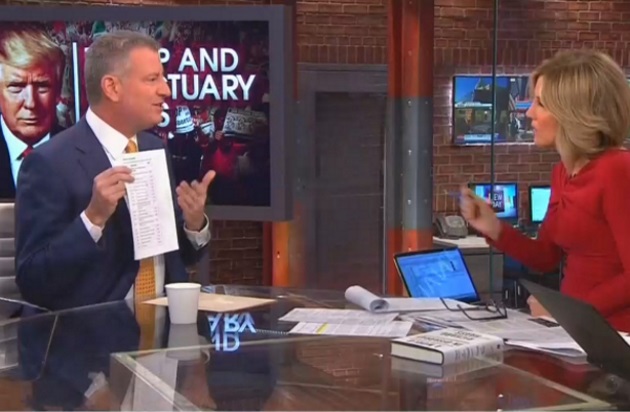 If this weren’t so infuriating, it might be funny . . . Appearing on CNN this morning to discuss President Trump’s plan to cut funds to sanctuary cities, NYC Mayor Bill de Blasio implied that the city will not cooperate in the deportation of thieves who don’t use violence because they might be the “breadwinners” of their families.

Message to the mayor: thieves aren’t bread “winners.” They are bread stealers. They’re taking bread from the mouths of children whose family earned it legally. In this theater of the absurd, de Blasio held up a list of crimes for which NYC would cooperate with immigration authorities. And non-violent theft is apparently not on the list.

CNN’s Alisyn Camerota asked whether theft would trigger city cooperation with immigration authorities. De Blasio answered that it would in cases of violent theft, mentioning the use of a weapon. Camerota pressed: what about simple theft? De Blasio dodged, moving on to crimes like minor pot possession and running a red light, for which he doesn’t want to break up families. He went on to say it would not be “moral” to deport people for “very low-level” crimes, which apparently includes theft, since such people might be their families “breadwinner.”

Note: I haven’t been able to locate the list, but this article mentions that among the crimes on it are patronizing a prostitute. So theft, which by definition is non-consensual, is not on the list. But the john who conducts a consensual arrangement with the prostitute can be deported. How PC. And why the john and not the prostitute? By that logic, we would deport people who buy drugs, but not the pushers.

ALISYN CAMEROTA: But there are some sanctuary cities, and maybe New York City is one of them, that says that they will not work with ICE agents even for people in jails. Even for people suspected of being undocumented immigrants in their jails. Why not hand over the people who have committed these crimes to ICE agents?

BILL DE BLASIO: Another misunderstanding about so-called sanctuary cities. Here’s a list right heree of 170 offenses that if someone is undocumented, they commit this offense, we will work with ICE and they will be deported.

CAMEROTA: How about theft?

DE BLASIO: There are very low-level crimes, for example, small amounts of marijuana possession. Going through a stoplight that doesn’t cause any damage to anyone, those are areas where we will not work to see someone deported. Why? Because these are members of a family in our community, say it’s the breadwinner in that family. So you deport the breadwinner and the rest of the family, including the children, are left without anyone. You tear a family apart. That’s not good government. That’s not in my view moral.

Strange, the NYC police will still pull you over for that and write you a ticket. And if the driver is illegally in the US, how do they have a NY driver’s license? Have they paid their car taxes? Do they have the required insurance? If while driving through that stoplight they happen to plow into the side of a legal resident who has all of the above, who will wind up paying the price tag?

As an immigrant, I have never understand leaving their statement “We can’t break up families.” They would go with their parents. Simple. That’s what happened when my mom had trouble with her green card. Kids stayed with her, duh. If they’re already in jail – who’s watching them now????

And they always act like these people are being shipped off to some gulag in North Korea.

notamemberofanyorganizedpolicital in reply to Eddie Baby. | January 26, 2017 at 11:10 am

We break up families all the time. When you get busted for selling drugs you may be the breadwinner in the family. But you’re still going to prison if you have enough quantity of drugs on you, or if the police execute a search warrant and find it in your house.

Kids are just as upset whether their parent is incarcerated or deported. Illegal is illegal; they’re must not be one class of lawbreakers, who get a pass to keep their family together simply because they’re foreign nationals not in the US legally, and another class of lawbreaker whose family we will break up because they are US citizens.

This surreal exchange with de Blasio reminded me of a SNL skit. In a People’s Court hearing, the judge asks a witness to state her profession. She nonchalantly responds: “I am a barfly.”

No reason to “tear the family apart,” children belong with their parents until they’re of legal age, so the kids go wherever the parents go- easy.

I would say that they’ve lost their moral compass, but how can somebody lose what they never had?

It will be interesting to see how the residents of NYC feel when they lose federal funding and garbage is piling up in the streets again, and water won’t flow and the trains stop running. They might feel that deporting lawbreakers is not such a bad idea.

And because they are thieves like the Democrats themselves.

True. So DeBlasio is simply observing professional courtesy by not deporting thieves.

Trump became a major player in the 2016 election as soon as he started talking about doing something about this racket. Nobody else stepped in; Trump used that opening for his salesmanship to fight his way to the White House.

And some people are still baffled by that.

I don’t want the government to “bring us together”. I really don’t have much in common with people whose brains work like de Blasio’s.

notamemberofanyorganizedpolicital in reply to tom swift. | January 26, 2017 at 11:09 am

We do not need any “government” to “bring us together.”

In a properly functioning “Republic” you need the voices of differing opinions heard and voiced – not suppressed as the “Uni-Party” and MSM have been doing the last many years.

However, it is the citizens’ responsibility to insist the “conversation” is required to be within the lines of some civility – and that the “conversations” are never allowed to be run on “pure emotion.” (Again something the Uni-Party and MSM have deliberately sued to sabotage a free Republic.)

In regards to that, I’m glad Dr. Jacobson is requiring registered users for comments. I know the onslaught of all sorts of political trolls the past year has been unbelievable.

Good lord is he a liar or just an abject moron? The only reason many thieves are not violent is simply because they haven’t (yet) been caught in the act. Allowing this sort of thing eventually leads to people getting hurt and killed.

Am I overlooking the “Tip Line” link?

And anyone who has been the victim of a ‘non-violent’ burglary knows how frightening, upsetting and violating it still can feel.

If you are on our sovereign property against our permission, then you must be removed and not allowed to return.

That is too rich, considering the largest thief in NYC sits in the Mayor’s chair.

Well, the people of NYC voted him into office. They deserve him.

Talk about somebody who doesn’t get it. I don’t mean the stupid argument about deporting someone who ran a red light, I mean that the world has changed. C’mon, forget halting Federal funds, let’s talk about obstruction of justice.

Leftists want to protect illegal aliens even after they commit crimes, they promote sanctuary cities in violation of federal law, they want more strict gun control laws to prevent lawful individuals from protecting themselves, they do not want to enforce many other laws on the books, they want to reduce sentencing severity for almost every crime, they have reduced many crimes from being a felony to a misdemeanor, and those, like Obama, are giving pardons out like never before. Could someone please explain to me how the Democrat party could possibly call themselves the party of law enforcement or even the party that is looking out for the everyday person?
>
If you add to this list the so called agreement with Iran, stabbing Israel in the back, destroying our economy using excuses such as global warming, weaponizing various government agencies (the most famous being the EPA), pulling out of Iraq to seize defeat from the jaws of victory, attacking Russia with sanctions for daring to hack DNC computers while ignoring much larger hacks into government agency databases by countries such as China, and so forth, and the question “Does the Democrat party even know what side they are on?” becomes overwhelmingly important.

Trump should pay an illegal alien to steal Bill de Blasio. Trust me, Billy Boy will never be missed.