Don’t tell us Cokie is biased against the abilities of immigrants! 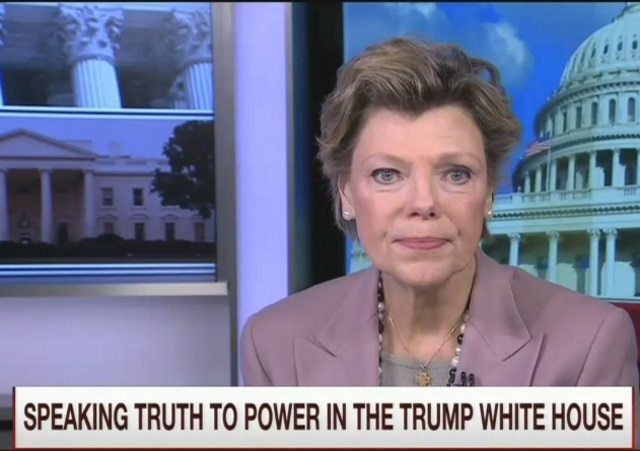 Don’t tell us Cokie Roberts is biased against the abilities of immigrants?!

On today’s Morning Joe, Cokie Roberts expressed doubt that Melania would be capable of carrying out a traditional role of First Ladies: that of serving as “truth teller” to the president.  Roberts said that it is traditionally the First Lady who is able to tell the president to “behave” and that a given move isn’t working. “I don’t know who can be the truth teller . . . and that is a real problem,” said Roberts.

Mika defended Melania, saying she would be capable of serving as truth teller, but wondered if she would, given that she is staying in New York with Barron. But that stay is temporary. And anyhow, there’s always Skype!

Roberts didn’t explain why she thought Melania wasn’t up to the truth-teller job.

ROBERTS: I was thinking about what Joe was just saying, somebody who could go in and say to him, look. You’ve got to get — behave, basically! And usually that person, frankly, is the First Lady. And she is often the truth teller to the president. And I don’t think we necessarily have that situation in this White House. And so I don’t know who can be the truth teller. There is no obvious person to be there and say, you know, look. I’ve known you forever, bud, and this isn’t working. Don’t do this. You know? And that’s a real problem.

MIKA: Well, actually, I do think she has the ability to do that. The question is will Melania take that role, given the fact she has got to stay in New York with her son.

I doubt Cokie knows whats true. She never reports it.

We elected the husband. Not the wife.

I’m sure all those intimate chats and interviews with Melania has helped her reach that conclusion.

It would be rather nice if the media would be a truth teller, but Cokie hasn’t worried about telling truth in a very long time.

Coke Roberts, I thought she was dead. She sure looks like it…