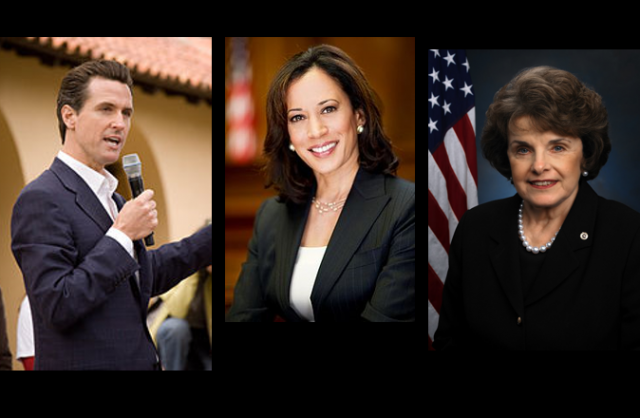 You would have thought no California Democratic politician would act loonier after Donald Trump’s presidential victory than Governor Jerry “Moonbeam” Brown, who threatened to launch a state-sponsored satellite in response to the incoming administration proposals to return NASA’s focus back to space exploration.

But never underestimate the ability of the Party’s representatives in the Golden State to plummet off the deep end and sink to the lowest possible level.

Let’s start with our Lieutenant Governor Gavin Newsom, Brown’s heir apparent. He has threatened Trump’s plans for a wall on our southern border with environmental lawsuits.

President-elect Donald Trump’s plan to build a wall along the border will run into resistance in California, Lt. Gov. Gavin Newsom said in an interview with The Golden State podcast .

The state could sue under the California Environmental Quality Act or its federal equivalent, said Newsom, utilizing a common tactic to delay or kill all sorts of development projects around the state.

“There’s something called CEQA in California — NEPA at the federal level,” Newsom said. “There’s indigenous lands and autonomies relating to governance on those lands. There are all kinds of obstructions as it relates to just getting zoning approval and getting building permits. All those things could be made very, very challenging for the administration.”

I thought our environmental laws were to protect the public from pollution, not to thwart some political agenda. I suspect that the lawyers who will respond to Newsom’s ill-conceived lawsuit will use this information to demonstrate that the case is not about protecting Californians at all.

I also believe that the Trump Wall will be finished way before the California bullet train system is complete.

Next, let’s look at the recent antics of our replacement for Barbra Boxer, Senator Kamala Harris. Remember when I warned you that she would be worse.

Harris is all that and more, as demonstrated about her misplaced concern about global warming and gay marriage when questioning CIA director nominee Mike Pompeo in front of the Senate Select Committee on Intelligence.

Pompeo deferred on restating his position as a member of Congress, instead saying, “As the director of CIA, I would prefer today to not get into the details of climate debate and science.”

He also promised to have a follow-up conversation with Harris to further discuss his views on climate science after he gives them more thought and discussion.

I suspect more Americans would rather have Pompeo focus on “Russian hacking” than on carbon dioxide emissions, and Islamic terrorists are more of a security threat to gays (as demonstrated by the Orlando attack) than a Kansas family man. But that isn’t on Harris’ social justice radar.

Let’s spend a moment on Russian hacking! Our senior senator now says she believes a Russian cyber and propaganda effort altered the outcome of the presidential election in Trump’s favor.

“I’ve had all of the major classified briefings. I have been astonished at what has been a two-year effort [at] Russia to spearfish, to hack, to provide disinformation, propaganda wherever it really could. And I think this has been a very sophisticated effort,” [Dianne] Feinstein added.

The Senate Intelligence Committee announced Friday it will investigate the involvement of Russian actors in the U.S. election, “including any intelligence regarding links between Russia and individuals associated with political campaigns.” President-elect Donald Trump’s critics have long raised questions about his friendly campaign rhetoric toward Russian President Vladimir Putin and a number of his top adviser’s ties to Russia, though none of the intelligence community’s statements or reports on Russian actions during the election suggest a link between the two.

Does Feinstein honestly believe Putin would have considered Hillary Clinton a more serious opponent, given her lack of stamina and ineptness? The only person to blame for Clinton’s loss is Clinton.

So, as our senior Democratic politicians cover themselves in Trump-hate and social justice shame, is there any way the Republicans can make a come-back in this state? Perhaps, as many Californians are very excited about Silicon Valley pioneer Peter Thiel running for Governor in 2018.

If Thiel is mulling over a campaign, then he should take a page from Trump’s playbook. That is, run as much as an independent as possible, stay way from party establishment types, and campaign against Sacramento and the political environment that created Newsom, Harris and Feinstein.

California is well on the way to Progressive immolation. I don’t see a good outcome here for the people of California.

By allowing illegal aliens to drive (and possibly register to vote wink-wink) Governor Brown has given the deplorables a huge list of deportables. Perhaps the politics will change once the voting lists consist of only eligible voters.

What I’m worried about is the people fleeing california voting for the same idiocy in their new, functional, home states.

I really feel sorry for those of you who are stuck there. You need to get out, you really do. It isn’t going to turn around – why wait until you’ve lost everything? By then, it will be too late.

California is the poster child for what NOT to do.

Currently – California is the only state that imports Crude oil. Everyone else lives mostly on fracked gas and oil or older existing wells. When Iran and Saudi Arabia finally decide to go toe to toe (right now in 4 proxy wars) – oil will rise to $150 a barrel – except in the rest of the USA. My gas in Charlotte will got to $3.00 a gallon. Gas in California will go to $8 or $9 a gallon.

That is when you will see the floodgates open and middle class people leave California in droves.

Maybe I can offer some assistance to the Demoncratic Party. If you keep playing the Racist, Bigot trump card you will continue to get “TRUMPED”!

Bam! Thank you, Thank you very much!

Some of us are “stuck” here because of the Navy! There are plenty of conservatives in California–just not in LA or SF.

There are some good, clear-eyed people here but we have to keep our heads down and conservative thoughts to ourselves – at least in the major metro areas. Sometimes I think of Abraham’s bargain with God about finding enough righteous people in Sodom to save it from destruction and I half wonder if the closet conservatives in this state are filling that purpose now. (I’m kidding! Sorta.) Gosh – I remember back when San Jose used to be conservative and looked down on crazy, liberal SF! But that was long ago and now I just don’t see how any Republican can get elected governor.

I have shaken my head so much at the insanity displayed by our “leaders” here in the PRK that my head is about to fall off.
Just biding my time until I can make my escape to Arizona.

Now that Jimmy Obama’s let him out: Chelsea Manning for Governor!

I live here (Beverly Hills, no less) and I have no idea why Californians vote Democrat. Of course, when I lived near Washington DC, I had no idea why people there voted Democrat either. When the same party has been making a mess of your hometown for decades, why would you stick with them? Yet they do.