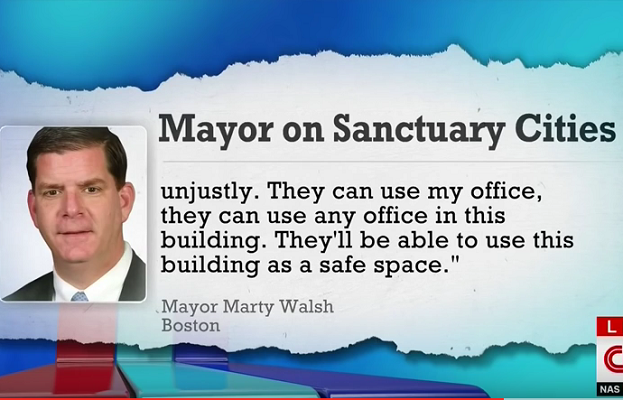 As President Trump moves forward on his campaign promises regarding illegal immigration, the progressive left is (delightfully) apoplectic. Sanctuary cities, in particular, are of special significance to them as Democrat mayors across the nation insist that they will resist Trump’s efforts.

Boston mayor, Marty Walsh, is taking his “resist we much” stance one step further and has declared that Boston’s City Hall is now one big “safe space” for illegal aliens.  He asserts that illegals can move in and live right there at City Hall, presumably “safe” from deportation.

It is not clear how far Walsh intends to go in harboring and protecting Massachusetts’ illegal aliens from ICE.

With a visibly diverse group of city employees and local elected officials huddled around him, Walsh said the city has been, and always will be, a safe place for immigrants, no matter their status.

“Boston was here for me and my family. And for as long as I am mayor, I will never turn my back on those who are seeking a better life,” he said. “We will continue to foster trusting relationships between law enforcement and the immigrant community. And we will not waste vital police resources on misguided federal actions.”

Walsh said he’s not intimidated by Trump’s fiscal threats — even though the city has approximately a half-billion dollars in federal revenue at stake, a spokeswoman for the mayor’s office said.

In fact, Walsh went so far as to open the doors to City Hall itself for anyone fearing deportation.

So serious is Walsh’s intention to throw open the doors of City Hall to the city’s illegal aliens (oddly, an invitation not extended to Boston’s burgeoning homeless population) that city leaders met to discuss the logistics of this proposal.

City officials met Thursday to work out logistics in the event they decide to provide what Mayor Martin J. Walsh is calling “emergency shelter” to undocumented immigrants as “a last resort” type of measure against President Trump’s immigration crackdown.

Among other things, they discussed sleeping arrangements, restroom facilities, and security, and planned to hold more meetings. They also considered the possibility of accommodating immigrants from outside the city who might want a refuge in Boston, city officials said.

. . . . But after his pronouncement on Wednesday, it was not immediately clear how the mayor would carry out his promise. Where exactly would immigrants stay in City Hall? The cavernous mezzanine? How would it work?

I don’t understand. The mayor doesn’t own City Hall, the people do. Now, I pretty sure he owns a house. How about opening up his own house instead? Maybe Boston provides a residence for the mayor, as Detroit and other cities do. But he’ll still have the house he lived in before becoming mayor and where he’ll likely return when he leaves office. Open your own residence(s) to illegals and then I’ll be impressed.

notamemberofanyorganizedpolicital in reply to Henry Hawkins. | January 28, 2017 at 3:53 pm

Why is Boston’s nick name “Bean Town” when they don’t seem to know beans?

the mayor does not (almost) live in bah-stin.

Hey – Illegals – Its a trap – Dont do it – Now the Feds will know where you are and it makes it easy for the Feds to lock you up and ship you out.

This is simply insane! What’s the mayor going to do, order the BPD to fight the ICE agents?

I kinda doubt that’ll work out for him…

My first thoughts, too. /smh

The next eight years are going to be so much fun.

One term Marty! People in Boston are not on board with this, IMO. Having grown up there, and visiting every other week people I know are sick of this baloney. The homeless problem is the worst I’ve ever seen it, in fact we carry extra food with us to give them. A Facebook pal of mine is an eighty year old East Boston woman, a staunch Democrat and second generation Italian. She and her friends are crazed by what is happening to the city, very refreshing to me. The schools are a mess, crime is up, drugs are all over, people feel shafted. I hope they arrest mayors that continue to break the law.

Like many cities unfortunately, Boston has a number of homeless vets. While there are a number of private organization trying to help them I don’t ever recall Mahhty offering to throw open the doors of city hall to provide them with shelter.

Illegal alien… si…. homeles vet… your on your own.

Duh – Illegals vote democrat – vets not so much

Anybody know where Mayor Marty Walsh of Boston lives? Next time I’m in town I’m staying at his house.

And so the Democrats descend into self-parody, with city hall becoming a literal sanctuary for illegal aliens. I thought with Scott Brown replacing Ted Kennedy after 45 years that the state was getting better, but then he was replaced by Elizabeth Warren, and here we are.

Marty is a dim bulb… my guess is his IQ barely breaks triples digits.

He is a long time union hack who could quite possibly be indicted this year based on his working with his union thug buddies to extort a variety of businesses working on projects in the city.

This should be advertised far and wide among the oppressed illegal alien community. Free room and board at City Hall!! Come one, come all!!

Getting a couple dozen full time homeless illegal aliens setting up shop at your workplace…brilliant.

notamemberofanyorganizedpolicital in reply to BuckIV. | January 28, 2017 at 3:57 pm

This is great. What President Trump (I love typing that) should do is make a lot of waves over the next month or so to encourge all the illegals to move to the sanctuary cities and then declare them militarized zones, move ICE and the Army there, and round up as many illegals as they can find. Sort of like the old indians who used brush fires to herd buffalo off cliffs.

The president can’t just “declare a militarized zone”. Martial law is unconstitutional, except where the civilian courts are literally unable to function. Even in an actual disaster, the moment it becomes possible for the courts to function martial law becomes illegal.

Fulfill the mayor’s wish and people eventually will wish for interdiction. Like everything else…..wishful thinking. Of course the illegals were sent to Red State areas to lessen impact on Blues but this is an excellent opportunity to play Cloward and Piven on the Progs!

I can’t help noticing that he’s not offering his own house.

Hey Marty, you can have all of Portland’s Christian hating, America despising, inbred, illiterate, unskilled, satan worshiping, government dependent criminals too if you want them.

I wonder how they’ll verify that anyone showing up to take advantage of the offer is actually an illegal immigrant.

Whoever built the poo map for San Francisco may be on to something. It seems prog-run cities all over the country will be needing one soon.

For at least the third time, what reform could you possibly want to emigration? Why do you care who leaves the country?

Let me make this simple, “Sanctuary Cities” are racist. They only perpetuate the carnage on our southern border.

Too bad Mayor Idiot didn’t declare the entire Boston Marathon a “sanctuary” back in 2013. I’m sure that wouldn’t stopped the Tsarnaev Brothers.

One has to wonder how the city hall employees feel about this.

Of all the bone-headed ideas. If he carries this out, all it means is that now the feds know where there’s a bunch of illegal immigrants, so they can come and arrest them. Does he imagine he can stop them? How?

Mayor Marty is looking for a place to go next election and with the voters up in arms about Lizzy Warren. There will be a need for a new “crazy” to lead the Taxachusetts Dems.

Oh, I sincerely hope they go ahead with this. I do, I do, I do. Such fun it will be.