“Bikers for Trump” Roaring Into DC To Counter Inauguration Protests

“Bikers for Trump” Roaring Into DC To Counter Inauguration Protests

“We have a strict code of conduct where we don’t condone violence.” 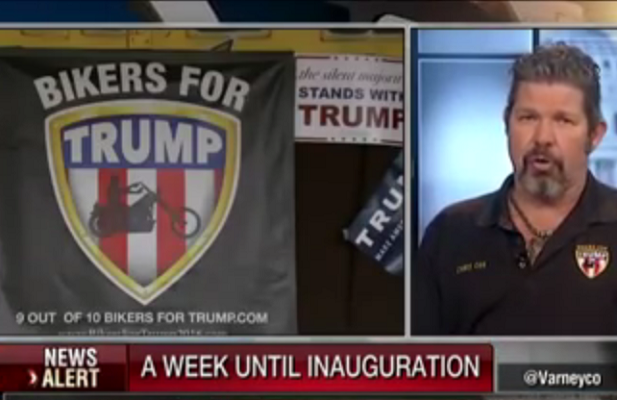 As progressives send death threats to entertainers who planned to perform at President-elect Trump’s inauguration and plot mass disruption of same, Bikers for Trump are planning to roar into DC and counter the melting snowflakes’ fruitless, groundless wails with some American spirit.

A motorcycle group led by a South Carolina chainsaw artist will ride into the nation’s capital on Inauguration Day in support of the 45th President of the United States.

Bikers for Trump, a group of motorcycle enthusiasts, will likely be toeing the line with protesters, who are also expected to be at the event.

“The bikers are certainly used to being outnumbered and we are prepared to form a wall of meat,” Chris Cox, the founder of the organization, told the FOX Business Network.

However, Cox said he doesn’t foresee any problems occurring during the event, especially after the group’s experience at the Republican National Convention in Cleveland, where police successfully maintained order between Trump’s supporters and protesters.

“We’re anticipating a celebration here. We don’t anticipate any problems. We have a strict code of conduct where we don’t condone violence. But again in the event that we’re needed, you can certainly count on the Bikers for Trump,” Cox said.

He added: “The backbone of the biker community is the veteran. So these are guys that aren’t really used to backing down. You certainly won’t see bikers out there screaming, calling for destruction of private property or the death of police officers.”

. . . .  “[The bikers looked for] someone who was going to stand up and call it what it is,” Cox explained. “Radical Islam is one of the biggest talking points of Bikers for Trump. Illegal immigration and one of our sweet spots is getting behind the American veteran. We believe it’s incumbent upon all who understand the value and the sacrifice of our servicemen and women that we are there for them. And we’ve got to change these policies now.”

According to Cox, the bikers’ rally at John Marshall Park will begin “shortly after Donald Trump exits the stage to go into the Capitol. And it will end shortly before the parade on Pennsylvania Ave.”