Cutting through the partisan noise to instill hope for unity 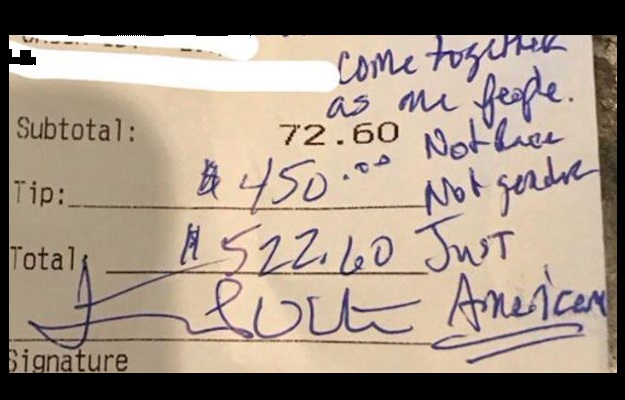 Some Trump supporters dining in DC after the “women’s march” surprised their waitress with a huge tip and a message of unity and healing.  Their waitress, an anti-Trump black woman who had participated in the “women’s march,” was overwhelmed when she received a $450 tip and took their message to heart.

A waitress at a Washington D.C. restaurant received a very generous tip and a warm message on her receipt from three men who were in town for President Donald Trump’s inauguration.

Rosalynd Harris, who works at Busboys and Poets in the northwest part of the nation’s capital, told The Washington Post she was beaming with confidence Monday after taking part in the Women’s March over the weekend.

A group of men from west Texas entered the restaurant and started to chat with Harris. One of the men, who said he was a dentist, complimented her on her smile. Harris, who is black, told the Post she was admittedly a bit prejudice [sic] when the men, who were white, told her they were in town to support Trump.

However, Harris didn’t expect what would come next.

After the men had left, Harris picked up their check and found that they left a heartwarming message and a generous tip. They left Harris a $450 tip on a $72.60 bill. Their message read:

“We may come from different cultures and may disagree on certain issues, but if everyone would share their smile and kindness like your beautiful smile, our country will come together as one people. Not race. Not gender. Just American. God Bless!”

According to the Washington Post, Harris read the message before seeing the tip and was overwhelmed by the heartfelt appeal to set aside identity politics in favor of coming together as one nation.  She notes that these Trump supporters were “more embracing than even some of my liberal friends.”

The men were gone before Harris saw the receipt. She read White’s words before she saw the tip, and the words alone were enough to overwhelm her.

“You automatically assume if someone supports Trump that they have ideas about you,” she said, “but [the customer was] more embracing than even some of my more liberal friends, and there was a real authenticity in our exchange.”

The windfall also came at a time when Harris could really use it, she said. A professional dancer, she started waitressing about a year-and-a-half ago to make extra money to pay her bills. She needs to move to a new apartment soon and has worried about how she’ll have enough cash to pay any upfront costs. She scheduled herself to work extra shifts to ensure she had enough, and the extra $450 is “a huge weight off my shoulders,” she said.

But she said the men left her with so much more. Their words were a reminder not to make assumptions. And that so many Americans want unity, regardless of their politics, and to not be afraid to connect with someone as human beings, she said.

“This definitely reshaped my perspective. Republican, Democrat, liberal are all subcategories to what we are experiencing,” she said. “It instills a lot of hope.”

As this is the same message we’ve been trying to relay for years, it’s heartening to know that it does cut through the partisan noise and media bias to reach our fellow Americans.

The thought crossed my mind, but Steele’s insights are more directed at the idea that government should “help” black people as a means of assuaging guilt, fobbing off responsibility and feeling righteous while simultaneously and in effect maintaining the white-dominant status quo. That doesn’t seem to be the motivation here.

Agreed. White guilt sees differences and divides people based on those differences. I do not sense anything but unity here. The generosity makes sense if you have every known anybody waiting on tables as she must have appeared to be one of the misguided liberals and not the hate-filled Soros type of liberal.