“statue required a more thorough assessment of the implications” 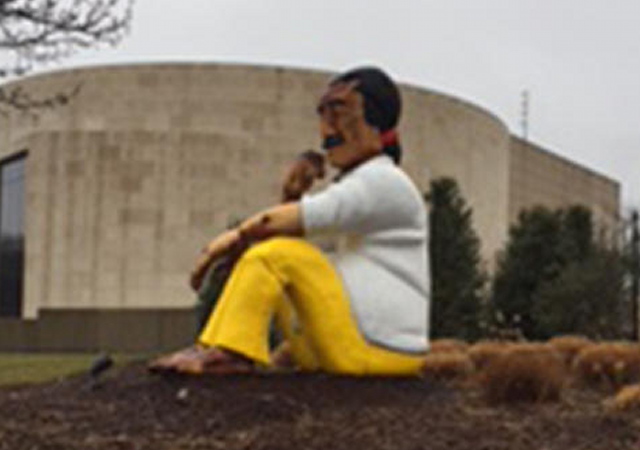 American University has recently been home to a statue of Leonard Peltier, who was found guilty of killing two FBI officers in the 1970s. Now the statue is coming down.

American University plans to remove a controversial statue from its campus after an outcry from law enforcement groups.

Supporters believe Peltier was wrongly convicted – even framed. But critics call him “a cold-blooded killer” and they were outraged when the giant statue landed on the American University campus, prominently displayed near Ward Circle.

At first, responding to reporters’ questions, AU took no position on the artwork. But that changed this week.

“The decision to host the Peltier statue required a more thorough assessment of the implications of placing the piece in a prominent, public space outside the museum. With the benefit of a fuller review, we have made a decision to remove the piece from this location,” the university said in a statement.

The statement continued, “the subject matter and placement of the piece improperly suggested that American University has assumed an advocacy position of clemency, when no such institutional position has been taken.”

In other words, “We’re sorry we got caught.”

Parse their language like it is a deal with the devil (or Bill Clinton – not that he’s evil per se, you just have to be every bit as careful with the language).

It’s a shame they’re going to tear it down; they could put a feather headdress on it, give it some traditional buckskin clothing and call it “Sitting Bull”.

Or better yet, give him a baseball cap and put a catcher’s mitt on him and call it “Chief Knock-a-Homa during the 7th inning stretch”.