Life, and death, in the age of digital imaging and social media. 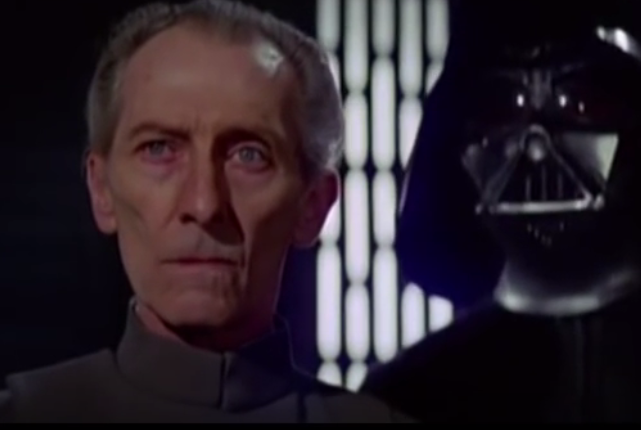 As I noted in my review of Rogue One, perhaps the most interesting aspect of the film was the digital return of Peter Cushing in the role of Grand Moff Tarkin, despite his 1994 death.

In the wake of Carrie Fisher’s sudden death, speculation is that this technique could allow the character of Princess Leia to continue despite the loss of the talented actress.

It’s impossible to predict how big a role Leia might have in the final film of Star Wars’ triple trilogy, Episode IX, which is due for release in mid-2019. There could also be spin-off stories, a la “Rogue One,” that will continue even after Episode IX’s release.

If filmmakers were contemplating a role for Fisher in any of those movies, they’re facing a huge hole in their scripts. And one option to fill it could be the strategy that was used in “Rogue One”: creating computer-generated, motion-capture characters.

The possibilities have launched a move by celebrities to protect their images from beyond the grave.

“Celebrities are increasingly involved in making plans to protect their intellectual property rights,” said Mark Roesler, an attorney and chairman of CMG Worldwide, an agency representing celebrity estates. “They understand that their legacy will continue beyond their lifetime.”

Roesler said at least 25 of his clients are engaged in actively negotiating the use of their or their loved ones’ computer-generated images in movies, television or commercials. Employment contracts govern how they can be used in a particular film or commercial, while a performer’s will can address broader issues.

Some actors or heirs worry that overexposure will tarnish a celebrity’s image, Roesler said. Some explicitly rule out posthumous depictions involving sex or violence, while others focus on drugs or alcohol.

California law gives heirs control over actors’ posthumous profits and requires permission for any of use of celebrity likenesses. With the improvements in digital imaging technology, actors and actresses are assessing how to protect their legacies regarding how images are used.

Robin Williams, who died over 2 years ago, was among the first to foresee these possibilities.

Robin Williams, who committed suicide in 2014, banned any use of his image for commercial means until 2039, according to court documents. He also blocked anyone from digitally inserting him into a movie or TV scene or using a hologram, as was done with rapper Tupac Shakur at Southern California’s Coachella music festival in 2012 – 16 years after his murder.

In related news, The Walt Disney Company may be receiving a $50 million insurance payout due to Fisher’s death.

Sources said that Disney had taken out $50mn of so-called contract protection cover as insurance for the event that Fisher was unable to fulfil her obligations to act in the new Star Wars films, with the policy now likely to trigger.”

If true, the $50 million payout — which Lloyd’s of London is on the hook for — would be the “market’s biggest ever single personal accident insurance claim.”

Would this kind of issue get caught up with copyright law? With the image eventually passing to the public domain?

I could see the Screen Actors Guild taking a stance on this.

I just wish American inventors has the same “intellectual property rights” as actors and musicians. The creators of the things we use every day mostly die penniless because others freely steal their ideas and profit from them. Douglas Engelbart who invented the computer mouse, Gary Kildall who created the first operating system for personal computers, Nikolai Tesla who discovered alternating current, Dan Bricklin who created the first spreadsheet program, VisiCalc, Joseph Coyle (Canadian) who invented egg cartons, the two ladies who invented icicle Christmas lights only to have their invention stolen by the Chinese, Robert Kearns who invented the intermittent windshield wiper only to have his invention stolen by Ford. The list is long. Maybe Trump will beef up the U.S. Patent Office?

If not any more legal protection, I wish people like this at least got more recognition in American culture. Thanks for reminding us of some of their names!

As a software developer it disgusts me the way patent law has taken over our industry when trademark law was doing just fine. Now we have the USPTO issuing specious business process patents out the wazoo and then troll organizations snapping them up and crushing the little guys out of the market. Some of these patents are just ridiculous, like for example hand gestures that people have used for centuries now “belonging” to one company because they used it on a specific platform.

I think the obvious solution to the Leia/Carrie Fisher problem is to try to get Billie Lourd, her daughter, to take over the roll. Lourd had a small role in ‘The Force Awakens’ and if she wants to get into acting, well, she looks just like her mom.

How long will the Carrie Fisher worship continue. So what if she was Princess Leia! So get someone else…big deal.

Indeed. It seems that too many people forget she was merely an actress (big whup) and not a real princess.

Wait ’til someone realizes that this same technology can be used to make an aging actor look and sound like his own forty-years-younger self. This could all get pretty weird. Meanwhile, Fox could probably replace Megyn Kelly with a digital Walter Cronkite.

I don’t think people remember this, but in the 1970’s or was it the 1960’s there wasa television show called Pwetticoat junction. The show was a knock off from the Beverly Hillbillies, made because Bea Bernadette was a minor character in BH, and they liked her so much they gave her a show of her own.

As the show progressed Bea died and was replaced by a new character played by June Lockhart.

They hid her death for a long time, saying she was off on vacation or visiting family etc. They had one final episode with Bernadette in it. One of her daughters was giving birth, the episode mainly focusing on the daughter. But there were some scene of Bea trying to get home and of her finally getting home tyo see the newborn.

They used a few canned phrasees and showed an other similar actress from behind.

So this is not new, it’s just getting more sophisticated.

Anyone remember the posthumous “Don’t Smoke” commercial by John Wayne? I think Yule Brenner did one too.

They were shot before they died though.

Both John Wayne and Yul Brynner were shot to death? Sad.

For any film-makers or such out there who might be reading this thread, I want you to know that you have my permission to humously use my image, digitally or otherwise, in any way that is consistent with my religious beliefs and political views, as long as I am paid. Consider this my gift to you. (Oh, and by the way, I prefer to be presented as a superhero, or a hero in the Clint Eastwood vein.)

Maybe just about every actor everywhere can now be replaced with an android-looking digital image. Think of the savings. Then when the idiot Jennifer Lawrence makes stupid statements, it won’t affect the movie studio’s bottom line because just because the computer generated image sort of looks like her doesn’t mean it is her. Then they don’t need to pay some star(let) tens of millions for movies that suck.

LOL! This is an absolutely brilliant idea. Better if the actors/actresses used in the digital recreation process were “undocumented”.

Please don’t ever do a Grand Moff Tarkin or Princess Leia again. Peter Cushing/Captain Clegg was not convincing and was overused. Perhaps a reflection in a window to show he was present, but it was way over used. If we don’t draw the line somewhere, future Star Wars movies will look likes Episodes 1, 2 & 3–done entirely in CGI which was awful.

With CGI getting better and better I think actors have a bigger problem; that of being completely out of a job.

Never happen. As it is, I can’t understand why they use a slew of big name actors in animated movies. A few are memorable (Ellen Degeneres as Dory), but most of the time I can’t recognize who’s voice is who? Mel Blanc did all the voices his Warner Bros. cartoons.

Never happen. As it is, I can’t understand why they use a slew of big name actors in animated movies. A few are memorable (Ellen Degeneres as Dory), but most of the time I can’t recognize who’s voice is who? Mel Blanc did all the voices his Warner Bros. cartoons.