The academic boycott circular firing squad forms on the left.

But I told you so. Many, many times.

To those in the U.S. academic community who support the academic boycott of Israeli academics because they don’t like the policies of the Israeli government, I warned that they better prepare for the day when foreign academics start to boycott them for the actions of the U.S. government.

That day has arrived sooner than I thought. Though the boycott of U.S. academics being mounted is much less severe than the boycott sought against Israel, it’s a boycott nonetheless.

The Chronicle of Higher Education reports:

Some faculty members are calling for a boycott of academic conferences in the United States in reaction to an executive order, signed on Friday by President Trump, that bars citizens of seven Muslim-majority countries from entering the United States.

A petition circulating online has drawn the signatures of hundreds of academics around the world.

“We the undersigned take action in solidarity with those affected by Trump’s executive order by pledging not to attend international conferences in the U.S. while the ban persists,” the petition says. “We question the intellectual integrity of these spaces and the dialogues they are designed to encourage while Muslim colleagues are explicitly excluded from them.” …

Max Weiss, an associate professor of history and Near Eastern studies at Princeton University and a signer of the petition, said in an interview that “academic boycott is one of the few resources that intellectuals and academics have for expressing their opposition to policies of a given government.”

Emery Berger, a professor of information and computer sciences at the University of Massachusetts at Amherst, said he had heard discussions of relocating or banning conferences set to be held in the United States. Mr. Berger, who is involved in two subgroups of the Association for Computing Machinery, an international organization that runs many computer-science conferences, said members were discussing ways to lessen the effects of the travel ban.

“Science is intended to be free and open, and any place that restricts the travel of scientists to present their work is a problem,” Mr. Berger said. “We are talking about taking steps to mitigate this problem however we can.” He said he suspected other disciplines were having similar discussions.

He’s heard some academics call for a complete ban on conferences in the United States, until the order is lifted, Mr. Berger said. 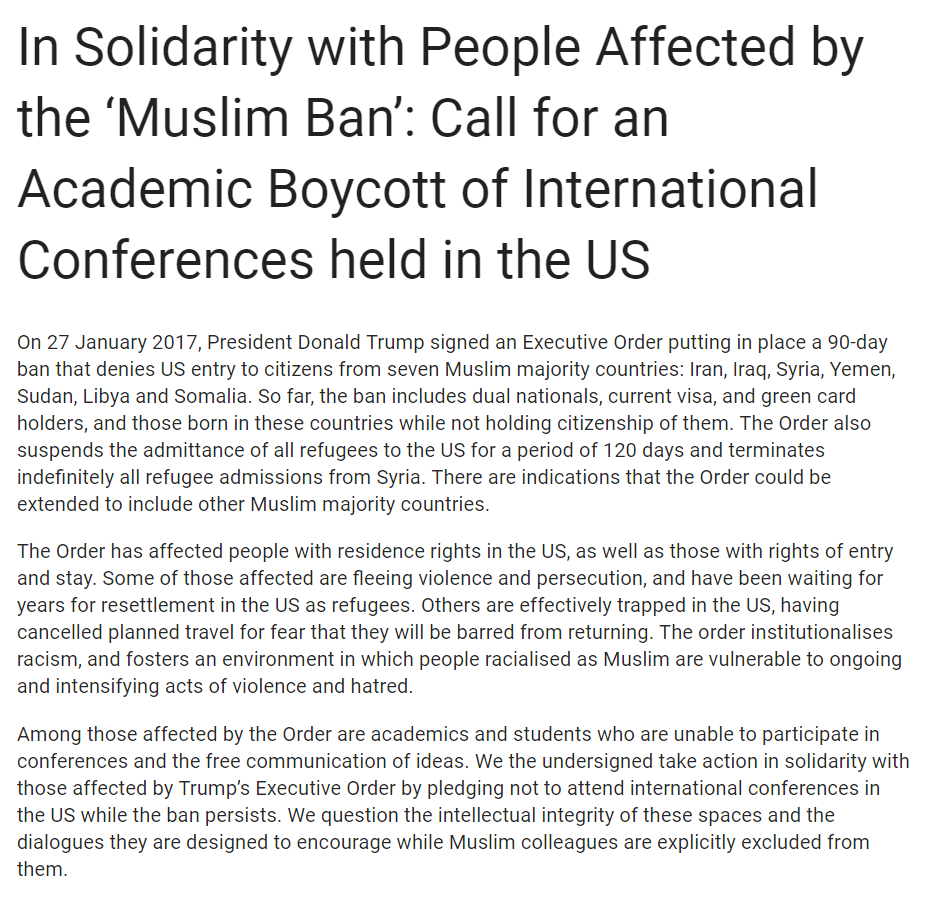 A column in The Guardian raises the same issue, Should academics boycott Donald Trump’s America?:

The inauguration of President Trump poses a challenge to liberals inside the US and beyond; a truth brought home only too vividly by the introduction of an executive order barring entry to all refugees and any citizens from a list of Muslim-majority countries. There are many ways that the academic community can resist – and is resisting – the illiberal, populist regime represented by Trump’s White House.

But for non-US academics who travel regularly to the US to participate in scholarly meetings, this latest measure presents a dilemma of a very particular kind: should we continue to participate in conferences held in the US which many of our colleagues, including British academics with dual citizenship, may be prevented from attending?

This is not an abstract question. I am myself in the process of making a panel submission for a conference to be held in Denver in November. Others already have places confirmed and flights booked for major events taking place in the coming months. Should we change our plans in solidarity with our banned colleagues, or would doing so only isolate US-based scholars whose critical voices are needed now more than ever?

Should academics participate in conferences in the US which fellow scholars from 'banned' countries may be prevented from attending?

I’m basically laughing my ass off over this development because it proves my point that academic boycotts are a systemic threat.

I still haven’t seen anyone call for an academic boycott of Turkey, despite thousands of academics having been arrested. And what about all the Arab countries and universities controlled by Hamas and the Palestinian Authority where there is no academic freedom?

Pretty selective outrage among the circular firing squad forming on the left.

UPDATE: The boycott is spreading, particularly in Canada, as the Toronto Star reports, and accusations that the U.S. is an Apartheid State are being made (just as they are made against Israeli to justify the boycott), Canadian academics boycott U.S. conferences over Trump ban:

So, some people don’t want to come to conferences in the U.S.A.
I am OK with that!
Let’s take it a bit further and revoke their visas, since they don’t need them anyways.

The funny part is that none of these academics are eagerly awaiting an opportunity to enjoy the nightlife of Ankara.

And every one of them is drooling at the chance to get their organizations to buy them a ticket to Disneyworld. (literally or metaphorically)

Time to admit openly that “conferences” are just junkets in which participants get a free ride to go hang out with friends and eat too much and drink WAY too much – no serious “scholarship” has happened at one of these things since the 19th century, I’ll bet.

So liberals are asking fellow liberals to give up free booze and snacks for the Good of the Party. I think I can make a good bet on which way that decision will go.

-> academics are eagerly awaiting an opportunity to enjoy the nightlife of Ankara. <-

They should definitely have an academic conference there on the theme, “Islamic Terrorism is a Myth.”

notamemberofanyorganizedpolicital in reply to Tom Servo. | January 31, 2017 at 1:48 pm

Interesting that this is the knee-jerk (emphasis on “jerk”) reaction of so many academics to anything they find less-than-groovy. It used to be that academics had the stones and the integrity to openly oppose ideas with ideas.

I guess this is a lot easier.

“Science” is largely politicized and inhabited by leftists now. The “Scientific Method” is dead, has been for over 20 years. It’s been replaced by the lefts version, peer review. If you’re NOT liberal enough, or if your work doesn’t meet the agenda driven “science” you don’t get published. With regards to government employed scientists, Reagan fired the Air Traffic Controllers, Trump needs to fire the complete lot of these politicized hacks fronting themselves as “scientists”, and if hacks from other countries want to boycott, who cares? I am expecting the “scientist” march on DC to resemble something akin to channeling Burning Man. Dump the hacks, let’s see the return of sound science.

notamemberofanyorganizedpolicital in reply to Danne. | January 31, 2017 at 1:50 pm

So, exactly how many cutting edge computer science academics from Yemen will be affected by the EO?

The Left really liked the violent coups, abortion fields, and mass exodus when Obama waged social justice on the national Muslims and Ukrainians. Their nostalgia is palpable.

Some faculty members are calling for a boycott of academic conferences in the United States in reaction to an executive order, signed on Friday by President Trump, that bars citizens of seven Muslim-majority countries from entering the United States.

You’ll know they actually mean it when they turn back their grant money, contracts, and Federal Aid…

So that you all can get a sense of what is transpiring at The Graduate Center (GC) of the City University of New York, there is only one (Iranian) student affected by the travel ban. Both the President of of the GC and the Doctoral Students’ Council (DSC) are advocating for her entry into the U.S. So that you understand the irony, the DSC is the student-run body that recently voted to boycott Israeli academics. So, this far Left group has not only decided that Israelis shouldn’t be allowed into the school, but simultaneously that Iranians (and others coming from Islamist-infected countries) should. The hypocrisy is astounding!

Stop portraying us as the bad guys.

The older I get, the more I tend to think this is what the intelligentsia is really paid for – to shriek like scared monkeys at the cue of their political minders. Unless its a conference on Hammurabi, the travel restrictions would very likely not affect a single attendee. But fine, move your February conference to Quebec, I’m sure it’ll be well attended. I hear the École nationale d’administration publique is doing great work in the exciting field of Canadian public administration education.

notamemberofanyorganizedpolicital in reply to tyates. | January 31, 2017 at 1:53 pm

You win the Intertubes for today!

RE: “The older I get, the more I tend to think this is what the intelligentsia is really paid for – to shriek like scared monkeys at the cue of their political minders.”

Fantastic. Have all the conferences in the proscribed countries. This will have several interesting consequences:

b) they will not be allowed to wear pants

From what I can see … small loss.

I gained some insight into “conference culture” when I heard some grad students discussing their plans to hold off on their papers, because the conference that year (in something ghastly—theoretical acoustics, I think) was going to be in Providence; but if they held off for a year, they’d get to present their work at a conference in Honolulu.

Translation: the scientific and engineering conferences don’t have a whole hell of a lot to do with science or engineering. Also, too many grad students are putzes.

That was a long time ago, but things like that don’t get better with age.

good luck with that as there apparently are few to no esteemed academics in those 90 day banned countries..just maybe it has something to do with Islam’s freedom of thought