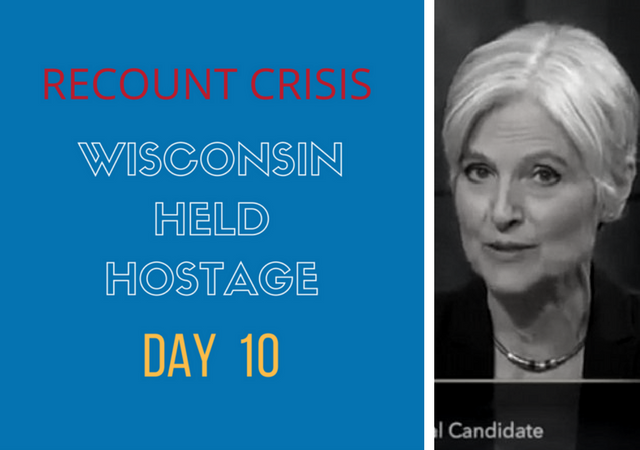 What’s doing with the Wisconsin recount?

Things are moving right along:

All counties in Northeast Wisconsin have completed their presidential election recounts, two days ahead of a state-imposed deadline.

Oconto, Outagamie and Winnebago Counties each finished recounting ballots by midday Saturday, the tenth day of the recount. All other local counties finished earlier in the week.

Discrepancies were reported in nearly every county. State election officials provided reasons for some of them.

According to the Wisconsin Elections Commission, all increases in Oconto County are attributed to the use of non-standard pens or ballots being marked incorrectly. Voter intent was determined during recount canvass. In Outagamie County, some ballots were erroneously run through a tabulator twice on Election Day.

This is riveting stuff:

Dane County: 11 Absentee ballots were left in their certificate envelopes on Election Night for the City of Madison Ward 2.

City of Verona Wards 2-4 results have been removed from the Day 10 update pending further clarification from Dane County Board of Canvass.

Is all this work making a difference. Not really. Heavy reports:

The latest update in the Wisconsin recount shows that 95% of all presidential ballots have now been counted, but there are still two glaring omissions: The City of Milwaukee and dozens of wards in the City of Madison.

Both of those cities are populous Democratic and Hillary Clinton strongholds, and their recounted returns had not all been reported to the Wisconsin Election Commission as of December 10. The state must certify its results by December 13 or it risks its electoral votes not counting.

Dane County, home to Madison, is doing a hand recount of its ballots (that decision was left to local governments). Congressman Sean Duffy recently accused the county of “taking as long as they can.” He claimed Jill Stein and Clinton observers are slowing down the count there by contesting ballots, according to Politifact. Duffy also came under fire for labeling Madison “Communist.”

The day 10 results show that Hillary Clinton has gained a net of only 25 votes over Donald Trump. Trump won Wisconsin by more than 22,000 votes, a margin that has changed only by microscopic amounts despite the at least $3.5 million price tag. You can get the latest raw recount data here.

Dems drawing out their own embarrassing defeat. Thanks!

Hillary gets to relive election night in super slow motion.

Anybody going to be surprised if they find 22,001 votes for Hilary, too late to be contested?

Those areas are waiting so they know how many fake votes they need to find. Maybe they’ll find 22,010. What a squeaker of a race!

True, though I wouldn’t put it past them to try, lol. If for nothing else to create a narrative of votes not being counted.

But wait! Russians were spotted in the trash bins outside the recount! Someone call Peter Jennings!

If you can call Peter Jennings then you’ve got a bigger story than the recount.

If I understand correctly, Michigan and Pennsylvania are out of play now. So if WI misses the deadline that still leaves Trump with 296 electoral votes. If the Dems suddenly “discover” a warehouse (graveyard) full of uncounted HRC votes it still doesn’t change anything. Am I missing anything?

No. Except the still-vibrant dream that somehow Wisconsin comes in for Hillary or not at all, while electors elsewhere decide that they can’t be stooges of the Russians and switch. Or something. Keep hope alive!

1. Wisconsin won’t miss the deadline. If Clinton hasn’t pulled ahead by the 13th the governor will simply certify the Republican electors.

2. The 13th is not the real deadline anyway; it’s only the deadline for the safe harbour. If the state’s process is over by that date and has produced a clear result, certified by the governor, then Congress guarantees that it will count those electors’ votes. If there’s no clear result by the 13th, or if the state legislature changes the rules after the election, then there’s no guarantee. But in this case that’s not an issue, since a Republican congress is going to accept a Republican result from a state even if the electors were not finally determined until 11:30pm on the 19th, giving the newly-declared electors just enough time to meet and vote before midnight.

With the recount failing, it’s clear the next narrative is that the Russians stole it or rigged it….or something that’s not exactly clear to me. But the newer campaign is now targeting delegates with some nonsense about a vote for Trump is a vote in support of evil and clandestine Russian malfeasance. Blah blah blah…

This is an attempt to sway the electors.

Couple this recount nonsense with the John Doe investigations and a picture emerges of a State with some nasty Progressives in key positions.

She sure looks frumpy in this photo. Looks like the doctor has had done work done on her face recently

She is morphing into Elizabeth Warren.

The Russians are so clever they convinced Hillary not to campaign in Wisconsin, not even once.

Maybe the slow counts in Milwaukee and Madison are so that they can wait to see what the final count needs to be in order for Ill-ary to win WI?

Hillary lost the election because she was a scandal ridden, openly dishonest, out-of-touch, just plain terrible candidate who never seemed to be able to talk about the issues (only about how bad a person Trump was). Now the Democrat party and liberals everywhere are showing the world how utterly disgusting they are by demanding the rules be changed (after the fact) into something that would give Hillary the election win and supporting frivolous recount efforts. Additionally, the Democrat Party and liberals everywhere are working overtime to delegitimize Trump even before he takes office, screaming to the heavens how they simply will not work with Trump (It took a year of Obama’s hate and disrespect toward Republicans before they turned against Obama so they at least had a reason), while others are going even further by demanding that those in the Electoral College all vote for a different candidate (if so, then why bother with the elections in the first place) and some are even suggesting assassination.
>
Could someone please explain to me how this behavior is going to convert me from an independent into a Democrat or how this is all going to show me how Democrats are the better party? Would someone please explain to me how all of this will strengthen future of the the Democrat Party. When I look at all of these shenanigans I gt the overwhelming opinion that the Democrat party is not dying fast enough so they feel the need to commit political suicide.

“Hillary lost the election because she was a scandal ridden, openly dishonest, out-of-touch, just plain terrible candidate who never seemed to be able to talk about the issues…”

Then why did Trump win? Not being helped up stairs. Not being held up for the podium. Not having head-bobbing seizures. Not hiding illnesses from the American public. Not under criminal investigation by the FBI. Not avoiding the press, but going out and talking about what he was going to do to make America great again. Energy, stamina, speaking to crowds of thousands every day, staying positive, clearly showing he was in touch with the average citizen and their concerns.

Dems whine about disenfranchised voters but think nothing of stalling the recount in Wisconsin’s Dane and Milwaukee Counties so that Wisconsin’s electoral vote will be Discounted rather than have them go to Trump. As a Wisconsin citizen and voter, I am incensed that they are given the power to do so.

That is not why they’re doing it, and you have no basis at all for claiming it is. It’s just a paranoid dream circulating on certain fact-challenged web sites, no different from the ones about how 0bama was going to cancel the election, etc. There was never any possibility that this recount could cause WI’s electors not to vote on the 19th, or their votes not to be counted.

I don’t think that Stein/Clinton ever thought they could overturn the results in any of the three states. I believe the objective was to create havoc and mass confusion, tie things up in courts, and provide the left with the opportunity to claim that Trump’s presidency is illegitimate, that he was installed by the courts (a la Bush). While it now sounds as utter nonsense, 10-20 years from now the new generation of college students will be sufficiently brainwashed to believe it.

The reason the city of Milwaukee is so late reporting is that they probably still haven’t figured out how to cover up voter fraud.

Wouldn’t surprise me either if they are fumbling for an explanation how Hillary loses a couple of thousand votes due to discovered fraud in those counties.

No this is about creating a narrative to delegitimize Trump. The “Hillary won the popular vote” isn’t working any better than it ever has so they have to have fallback positions. Its also in part the fact that progressive liberalism is a mental illness and when these delusions are challenged by reality they can not accept it. So they have to come up with an excuse of why Hillary lost 3 states she was supposed to win in a landslide, because to do otherwise is to accept that their delusion is false.

for 95% totals complete, and Hillary has picked up only 42 votes,,, the trend being that the original vote tallies were spot-on accurate; it would be a scandal of epic proportion if 22K more Hillary votes were “found”. since all of Wisconsin was roughly a 47% split between Trump and HRC, in order for 22K more Hillary votes to be found, you’d have to discover a crap-load of previously uncounted Trump and Hillary ballots – not just a garbage can full of Hillary-only ballots.

No. Please read Ed Morrissey at Hot Air. Most of Milwaukee is in.

Milwaukee city data is in except for absentee votes (roughly 25% of total votes are absentee votes). It is interesting to look at individual ward data (and compare the ratio of Clinton to Trump votes for non-absentee and absentee votes). The presenting of vote counts broken out by absentee and non-absentee by ward provides a unique opportunity to quickly identify and focus on suspect wards if someone is truly interested in investigating irregularities.

Thanks for the update.

“The presenting of vote counts broken out by absentee and non-absentee by ward provides a unique opportunity to quickly identify and focus on suspect wards if someone is truly interested in investigating irregularities.”

Wouldn’t it be awesome if that is what they were actually interested in?

Well it looks like we have “tested the integrity of our election system” and the only lack of integrity found was from Mrs. Stein.

They got what they wanted… Trump’s attorneys to try to stop the recount (which is what any candidate would do). They can then rail: “why wouldn’t Trump want to make sure the election was fair!” blather. She even blasted Michigan Republicans (and Fed judge) for abiding by state law. Why weren’t you in New Hampshire, Dr. Stein? Oh, that’s right…