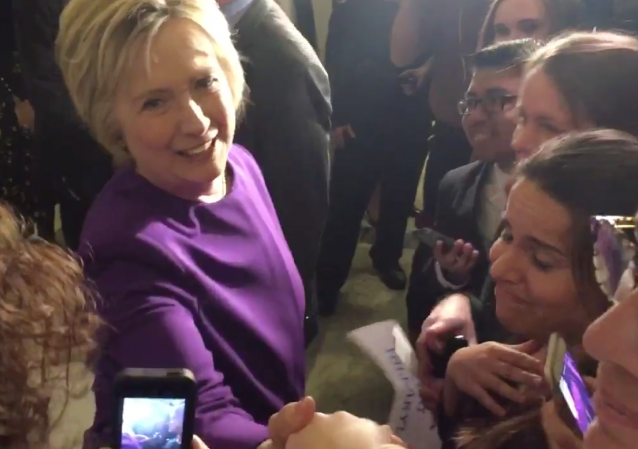 After an event on Capitol Hill Thursday night, Hillary was greeted by a group of young supporters who sobbed profusely when meeting the failed presidential candidate.

After the Reid event, Hillary Clinton greeted several Kaine staffers and young supporters, some of whom can be heard sobbing in this video pic.twitter.com/DRq0BApck1

Anna Giaritelli at the Washington Examiner:

Hillary Clinton was greeted by sobbing, ecstatic women on her way out of an event on Capitol Hill in Washington on Thursday.

The ardent supporters thanked the Democratic presidential nominee for running for president, albeit unsuccessfully. The group of 20-something-year-olds cried as Clinton shook their hands.

“This is not exactly the speech at the Capitol I hoped to be giving after the election,” Clinton said. “But after a few weeks of taking selfies in the woods, I thought it would be a good idea to come out. And I’m very grateful to Harry for inviting me to be a part of this celebration.”

If this spectacle seems familiar, that’s because we’ve seen it before:

I don’t mind hiLIARy making these kinds of speeches 🙂

As far as I am concerned, they can weep, sob, moan, wail or howl all they want. Four years nonstop. Good.

Weeping may endure for a night, but joy cometh in the morning.

Will we ever find out who gave Harry that beat down and why?

Good riddance to one of the most despicable people to hold office in my lifetime.

I would bet it was his filthy lying mouth. The little sniveling bitch certainly had it coming.

‘Who’ matters less to me than ‘when’ they’re going to pound the other one out.

It has been reported that his brother Larry who has a criminal history may have “tuned him up”.

Hillary did, did you not get the memo?

All the SJW sobbing reminds me of this:

WARLORD: Conan! What is best in life?
CONAN: To crush your enemies, to see them driven before you, and to hear the lamentations of their women.

My first thoughts too. And then I also wondered if they’re the ones who cry when Lady Macbeth dies.

If this is supposed to make me feel sorry for Hillosery, it isn’t working.

Let’s hope they’re still this distraught in 2020, so they’ll forget to vote. These crybabies don’t know what to do to improve their situation. It’s something they know nothing about: diligent, hard work.

I’m aware that some makeup artists can perform miracles, but Hillary sure looks to have gotten a lot younger since we last saw her. Being a two-time loser seems to have really, really agreed with her.

Oh how touching! I shed tears just thinking about it. Yes, yes, tears of joy.

I am crying tears of joy that Hillary won’t be president.

We’re still celebrating in my house. 4 weeks after that wonderful day.

BTW, they openly wept when Stalin died. And even today there are Russians who look back fondly on Stalin and his days!!!

This is one of the things that has always amazed me – that people can be so passionately behind someone who is so transparently rotten. What is wrong with them?

In my opinion this is what is wrong with folks announcing they are voting with their feelings (their consciences) and not their intellect (their brains). But wait, I know what you’re going to say, “These people don’t have any brains.” Well that’s true, too.

Based on what we know of how Hillary Clinton operates, this event was very likely fully scripted; aka “fake news.”

What is good? To crush your enemy. To see them driven before you and to hear the lamentations of their women. -C. Barbarian