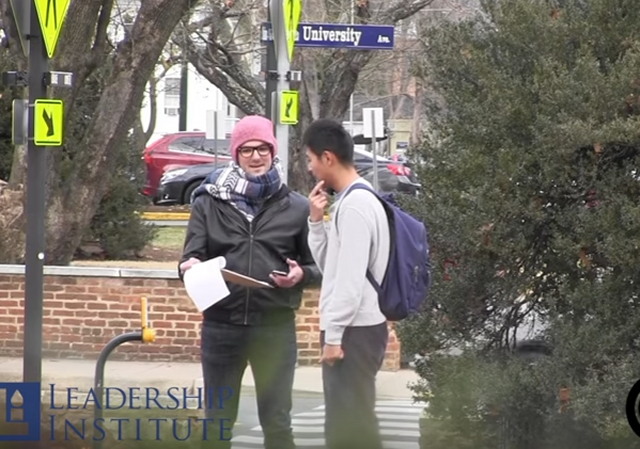 Two operatives from Campus Reform recently visited the campus of the University of Virginia and asked students to sign a petition to ban Christmas for being “non-inclusive.” Unsurprisingly, they were able to find people to sign it.

In this season’s most anticipated holiday spin-off, Campus Reform visits the University of Virginia dressed as “The Hipsters Who Stole Christmas.”

With schools across the country outright banning even such innocuous Christmas decorations as evergreen trees and images of Santa because they could be interpreted as being “non-inclusive,” Campus Reform wanted to find out what students think of the idea.

CRO reporters Amber Athey and Cabot Phillips visited UVA, created a faux student group called “Students for an Inclusive Holiday Season,” and asked students to sign a petition getting rid of school references to Christmas because of the holiday’s “oppressive” and “triggering” nature.

“This time of year, it feels like people can shove their holiday happiness in your face, like ‘Merry Christmas!’ and it just gets kind of old,” Phillips ventured, as a signee agreed.

Athey told another group of students that the faux student organization was sending a letter to the administration to let them know that the overt celebration of Christmas can be “almost oppressive” for some students on campus.

“I will totally sign,” a female student enthusiastically responded.

Campus Reform’s report concludes with this:

Campus Reform also attempted to tie an increase in Christmas spirit to Trump’s victory by suggesting that Christmas enthusiasts had become “emboldened” by “Trump’s rhetoric,” and some students agreed that it seemed they were hearing “Merry Christmas” more than ever before.

“It can be scary for some students,” Athey observed, to the sage nod of one petition signer.

How liberals celebrate the holiday season!

Progressive liberalism is a degenerative ideology. Liberalism, however, is a variable ideology. Some will celebrate the holiday season, while others will bray humbug!

Thomas Jefferson must be spinning in his grave at the sight of these idiots attending his university.

Wait a week and send the same two operatives from Campus Reform back with a new petition reinstating Christmas based on a new argument that Christmas is all-inclusive, welcoming all to participate, and I’ll bet you $27 the same students would sign that one too.

Is it naive to believe that these students so eager to shelter themselves and others offended by Christmas cheer (Peace on Earth to Men* of Goodwill) have not noticed that Islamic jihadists around the world are busy SLAUGHTERING people as a more direct approach to banning Christmas (San Bernardino, Berlin)?

Has it not come to their attention that jihadists are destroying churches (where Christmas is celebrated) throughout the Middle East and murdering the Christmas-celebrating worshipers found therein? Not to mention torching Christmas trees on public display, yes, and Christians too.

These students ought to reconsider the ideological company they are keeping, but I suppose they consider themselves too virtuous for that.

Proselytizing ridiculously bad ideas, even if just for giggles, is not really all that entertaining.

Save that petition! One of those snowflakes may run for office someday and it’d be nice to haul out proof they want to ban Christmas.