WaPo Op-Ed: Electoral College is to blame for global warming!

WaPo Op-Ed: Electoral College is to blame for global warming!

Yet, the Sahara Desert is hit with a snowstorm for the first time in 37 years. 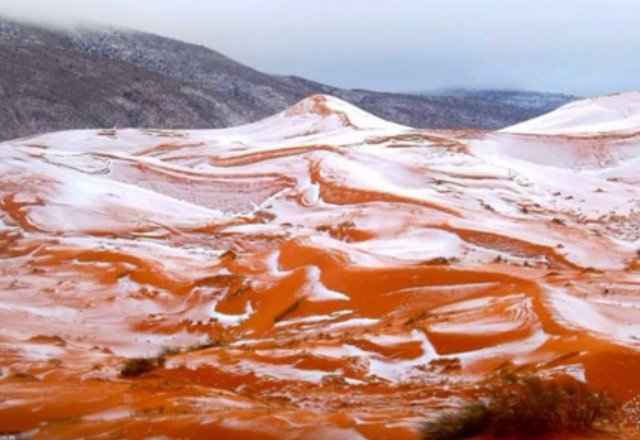 The Washington Post published an editorial that now places the blame for global warming on the Electoral College, as the elections of George W. Bush and Donald Trump through our constitutional process has made anthropogenic climate change nearly impossible to stop.

Todd Cort, the co-director of the Yale Center for Business and the Environment, takes us on a fascinating theoretical journey that clearly passes Reason and Sanity Junction:

…In 2000, George W. Bush was elected U.S. president despite losing the popular vote to Al Gore. In 2008, the Bush administration released a document on his legacy claiming sweeping protections for the environment while in office.

Yet there was little progress on climate change because the administration resisted it. Under the Bush administration, the U.S. exited the Kyoto agreement to limit greenhouse gas emissions, declined to regulate carbon dioxide emissions for coal fired power plants under the U.S. Clean Air Act, and worked to limit the authority of regulatory agencies to prevent climate change impacts.

In contrast, Al Gore went on to fame and a Nobel Peace Prize for his work to raise awareness of climate change.

Cort continues on with a description of the glorious climate change policy successes of the Obama Administration (which have put hoax-based environmental concerns ahead of real terror threats). You can check the recent lawsuit filed by the families of the Orlando terror victims to see how that has worked out for us.

Cort then paints a he thinks is most dire picture of Trump’s policy proposals:

The Trump transition website spells out the administration’s preferences when it comes to low and high carbon fuels: “Rather than continuing the current path to undermine and block America’s fossil fuel producers, the Trump Administration will encourage the production of these resources by opening onshore and offshore leasing on federal lands and waters…We will end the war on coal…and conduct a top-down review of all anti-coal regulations issued by the Obama Administration.” It seems safe to assume that the next four years, and possibly well beyond, will constitute another regression in our ability to address climate change, at least at the federal level and perhaps when it comes to the U.S.’s engagement with the world.

I believe that these policies were part of a robust platform that helped fuel Trump’s Electoral College success! And while Cort asserts that the the lack of federal efforts will be mitigated by city, state, and international actions, I suspect that within a few years American economic success coupled with better environmentally protective technologies will have the world adopting the Trump energy doctrine.

Interestingly, just as this editorial was being published, the Sahara Desert was being covered in snow for the first time in 37 years.

He captured the amazing moment snow fell on the red sand dunes in the world’s largest hot desert for the first time in 37 years.

Snow was last seen in Ain Sefra on February 18, 1979, when the snow storm lasted just half an hour.

This time the snow stayed for a day in the town, which is around 1000 metres above sea level and surrounded by the Atlas Mountains.

I would say that the angst regarding the Electoral College has officially reached its peak, but I suspect progressives will offer even crazier reasons to end this venerable institution. I definitely need more popcorn.

I think we should add a masters program and upgrade the Electoral College to the Electoral University. Or golf. We could go golfing.

My master electrician says good help is hard to find. How much education is required to keep from putting a foot through the ceiling. Oh, sorry. Reading comprehension is dragging me down. LOL!

“Yet, the Sahara Desert is hit with a snowstorm for the first time in 37 years…”

So that means 37 years ago, the weather was just as ‘odd.’

Al Gore as The Music Man – “…we got trouble…..” – the solution to your problem is whatever I’m selling; but, hey, that’s what makes America great. Unfortunately in real life there’s no librarian to save us.