Taking Trump both literally and seriously . . . 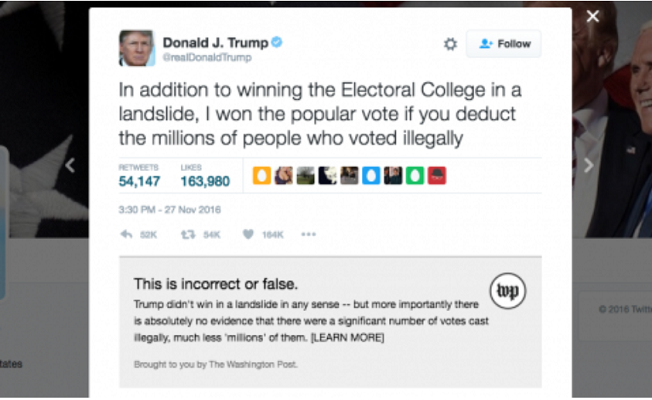 While the Washington Post didn’t seem very concerned about the eight years of disinformation oozing from the Obama White House and its online surrogates, they are so obsessed with President-elect Trump that they’ve created a Google Chrome browser extension to fact check Trump’s tweets.

We made a tool that slips a bit more context into Trump’s tweets. It’s still in the early stages, but our goal is to provide additional context where needed for Trump’s tweets moving forward (and a few golden oldies).

. . . .  Sometimes, we just add more context, like when Trump announced his pick of Rex Tillerson to serve as secretary of state. Curious for more info? It’s right there in the tweet now.

It takes a little while for the Chrome extension to update, so we’ll try to stay up to speed on fact-checking what Trump is tweeting, but it may take a few minutes. This is a work in progress, so don’t hesitate to offer feedback and thoughts.

And don’t hesitate to point to Trump tweets that could use a little explication. That’s the goal, after all.

I guess WaPo is still busily taking Trump literally and seriously, while Americans take him seriously, not literally.

The problem with taking Trump literally and seriously is the same as it is when you take anything figurative, illustrative, or hyperbolic seriously . . . you beclown yourself and come up with laughable “fact check” extensions.

Now you can fact-check Trump’s tweets — in the tweets themselves https://t.co/UsEW6zgFoW

Following is the description of the WaPo Google Chrome extension, RealDonaldContext:

Donald Trump’s primary means of communicating with the public is his Twitter account. Unfortunately, his tweets aren’t always entirely accurate, by mistake or by design.

The Washington Post’s Fix team has decided to help ensure that the public receives the most accurate possible information by creating this extension, which will add more context or corrections to things that Trump tweets.

Luckily, WaPo is open to our helping them in this endeavor by pointing out Trump tweets that need to be “fact checked” by the WaPo purveyors of all things truthy.

“The problem with taking Trump literally and seriously is the same as it is when you take anything figurative, illustrative, or hyperbolic seriously . . . you beclown yourself and come up with laughable “fact check” extensions.”

I am saving this. You have clearly summed up what liberals do but seem rather oblivious to it. My 3 teen kids are trying to understand what is wrong with things they hear in the news and we are talking through it a lot. I will be using your paragraph because it is particularly helpful and succinct.

That powerful magnifier the Wa-Po used to glorify the present administration is now being flipped to burn a powerful, malignant image of the incoming one. The role of social media may well be more important than ever. I wish I was clever enough to create an integrity-checker of The Wa-Po.

Those who enjoy “the good fight” will, most likely, have a great go at it over the next months and years.

From the same people who said not a word about “if you like your doctor you can keep your doctor”
Or “shovel ready jobs”.

Oh my! Where were these great “Fact checkers” when obama told a few “Fake” news items? like “If you like your doctor you can keep him” or
“obamacare will save the average family $2,500 a year”. How about hillary’s e-mail problem? “I heard about in the news” even though there were many e-mails sent to her illegal web address by jug ears. “Inflating your car’s tires is as good as a tuneup and will save as much oil as ALL of the offshore oil we now produce”. “I have drawn a red line in Syria and there will be consequences if it is crossed”. “The murders in Benghazi were the results of an antimuslim video”. “If I had a son he would look just like Trayvon Martin”. “Tell Vladimir that I will have a lot more flexibility after the election”.
Where oh where were these fact checkers then?

All right, not all Lefties are six years old. Some are thirteen years old. This is the way thirteen-year-olds argue. Find some point trivial to the point of irrelevance, attack or deny it (fairly or unfairly, it hardly matters), fixate on it, and pretend that you’ve invalidated everything else as well.

Recall when George W. was grilled about his days in the Texas Air National Guard, and said that he’d missed a couple of physicals. Aha! The Lefties pounced; he’d earlier admitted to missing a few physicals! A couple isn’t the same as a few! Bush Lied!

Some of them haven’t grown up much since then.

I would so love to fact check everything Washington Post puts out. I would love to point out every error, correct every misspelling and grammatical problem, and contrast their articles with their own articles which shows obvious bias and hypocrisy.

But then, I realize I have better things to do with my time than care what the Washington Post reports. I haven’t seen a single fact check lately that has been accurate. Almost all of them have been opinions or severe nitpicking. There are no such things as news journalists… they are all social engineers, opinion piece writers, and complete liars.

Mr Izz there is not enough hours in the day to Fact check WaPo.

Trump should tweet out a bunch of Obama’s assertions…then let the fun begin.

It is fine to fact check any statements made by politicians. However, given WaPo’s track record, it is unlikely that their “fact checking” will be anything more than a means to disparage Trump.

What is interesting is WaPo’s response to Trump’s tweet about ineligible voters. This is a HUGE story, if true. It is an impartial investigative journalist’s dream. If it is proven to be true that millions of ineligible voters participated in this election, then this is Pulitzer Prize material. Journos should be tripping all over themselves researching this story. But, that is not happening. Why would any news organ simply blow this off, without any investigation into its credibility? In fact, news organs go out of their way to arbitrarily decry these charges as being false, without any investigation at all. It is the same as stating that there is no evidence to support the claim that the Earth is not flat based upon a lack of evidence that it is a sphere.

If Trump had been voted in by illegal immigrants, the state-controlled media would be all over this like white on rice.

Hillary would have boldly claimed that it was brown rice and the white on it was from racist Trump.

Such BS. It all depends on what the meaning of voting “illegally” is. The propaganda arm of the Democrat party known as the news media immediately pounced and spread a claim that Trump said illegal aliens voted in the millions, when what he said was there were millions voting illegally.
When you take into account the phony “extra” votes on the machines in Detroit, on the order of several times the number of actual ballots run through the machine, plus the votes cast by someone registered in more than one state, plus the votes cast in the name of the dead, plus the votes cast by folks whose only tie to the USA is a drivers license issued by a pushover state that declines to require proof of citizenship (California, Washington, etc) to register to vote, and all the rest, yes, WAPO, millions probably voted illegally.
A little logic and actually reading the words go a long way . . .

Not enough Thorazine in the world to fix WaPo. Monkeys flinging poo.

Now, with Trump, you can just look on Twitter, and everybody knows it; most links will go to the original tweets. This means that the WaPo and all the other gatekeepers have become meaningless.

This is just a frantic attempt to stay relevant, to delay their ongoing slide into obscurity. And unless they can get Twitter to force this browser extension on everybody, they will fail.

An excellent point and reminder. There will be, in the early going, the hoopla about spelling, grammar, or incomplete thoughts that might over-ride Trump’s main idea, as we’ve observed recently. However, who hasn’t made their own mistakes. I think people will tire of the nit-picking and will focus on his thoughts, enjoying this direct communication from the POTUS.

Unless Trump goes Anthony Weiner on us, not to fear!

We still need news organizations, that is, somebody to pay for investigative reporting. I would welcome an upgrade to the Washington Post’s reporting.

However, they have a bad habit of losing their minds over Presidential elections, and this time, they have degraded their standards to New York Times levels.

Meanwhile, we have had a Presidential Campaign that paid for rent-a-rioters to harm American voters, for the purpose of blaming the opposition, took foreign money, and ran a character assassination campaign in collusion with the Press.

The Washington Post will not regain its credibility unless and until it seriously covers the crimes reported in the Project Veritas videos and the DNC and Podesta emails (and other leaks and disclosures from the courts, FBI, and NYPD).

I’ve already downloaded the extension. No copyright on the source.

I’m thinking of modifying it to be used with Breitbart and some enterprising reporter yo fasct check Pelosi, Schumer …

Didn’t they learn anything from using the nuclear option?

Taking grammar and spelling seriously on Twitter will be a new low for MSM, but they are already doing it with him. “Fact checking” him will not likely get them the attention they want. But given how crafty Trump has been in his use of social media – Twitter mostly – I expect he will end up with the upper hand. Imagine, for example, if he starts tweeting about mistakes that the “fact checkers” like WaPo print (online or paper). They will end up in a very public dragging down the rabbit hole and will lose any battle where they were guilty of “fake news.”

I *love* the combination of “… absolutely no evidence…” with the weaselly “…significant number of…” in the first Fact Check above.

It’s not even a statement of fact — they’re asserting that any number of illegal votes for which there is evidence is a number the WaPo fact checkers FEEL isn’t “significant.” That’s not an assertion of fact at all — true or false.

Their “fact check” will simply provide more coverage of Trump. “They” are too stupid to realize this.

I’ve seen how the Washington Post “fact checks” and “debunks” points made by the opposition. This is going to be fertile grounds for hilarity.

I imagine that it will fact check five tweets per month, and after that, every Trump tweet will include an invitation to subscribe.

What could go wrong???

Remember, it was WaPo that hired 20 “journalists” a year ago solely charged with digging up dirt on Trump. The sum total for their effort was a TMV film clip from 15 years ago, a handful of septuagenarians who remember being felt up by Trump forty years ago, and two pages from a 20 year old tax return. Those hacks need a place to land now.