Obama’s message coordinator for the Iran nuclear deal is messaging on the anti-Israel UN Resolution. 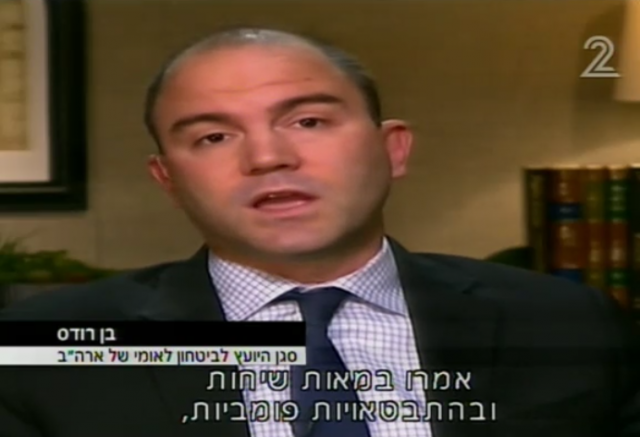 Obama advisor Ben Rhodes was in charge of coordinating messaging for the Iran Nuke deal. David Gerstman eviscerated Rhodes in this post, Grand Deception: How Obama and Ben Rhodes Lied Us Into the Iran nuke deal.

The short version is that in NY Times profile, Rhodes admitted to creating a false narrative of Iranian moderates who would be empowered by a deal — it was complete fiction, among many other media manipulations perpetrated by Rhodes.

Rhodes also in charge of coordinating messaging for White House pushback against criticism of the recent anti-Israel UN resolution.

Rhodes was interviewed today on Israel’s Channel 2 News, and denied that Israel had been ambushed. He also focused exclusively on the issue of settlements, and not the other aspects of the resolution, which declares Israelis living anywhere beyond the 1949 armistice line as being illegal. Israeli control of the Western Wall also is illegal under the resolution. Also ignored was how the Resolution will embolden Palestinians to take even more intransigent positions — which they already are doing.

He also deflected by referring to U.S. military assistance, as if that somehow overcomes the delegitimization of Jewish history and the reason for Israel’s existence. There is a global movement to isolate Israel for reasons having nothing to do with settlements — it’s essentially a religious war against the Jews having a nation in the middle of the Muslim world — and the Resolution helps that effort.

“We are not endorsing a resolution that seeks to impose a resolution to the conflict,” claimed Rhodes, and added that the resolution “deals with obstacles to peace…When we see laws that seek to legalize outposts, when we see rhetoric that suggests that this is the most pro-settlement Israeli government in history, and when we see the facts on the ground, again, deep into the West Bank, beyond the separation barrier, we feel compelled to speak out against those actions.”

In response to the interviewer’s question whether Israel can expect further U.S. initiatives, the most Rhodes would say was that “Well, I wouldn’t describe it as ‘new initiatives'”. The speech to be delivered by Secretary of State John Kerry will deal with the general American vision for resolution of the conflict, he added.

Meaning Rhodes was in charge of lying about it.

What a piece of garbage. His bosses, too.

One can only imaging that in his personal life Ben Rhodes is an insufferable, arrogant person with minimal to no social skills and no friends. Clearly he is a delusional, soon-to-be out of work failed fiction writer who wrote too much fiction that was so fantastical that no one could bring themselves to believe it. Unfortunately for America, his writing was our history and not some second rate book that refuses to be bought off the newsstand.

Rhodes is likely the most sinister and damaging presidential advisors in our country’s history. Weasaly, mealy-mouthed, and conniving are his attributes. He make Sandy Berger look like George Washington. It will be interesting to see where this vulture lands after the new administration. It’s important to keep your friends lose and enemies even closer!

It seems to me that every time Iran is belligerent we should knock out one of their forty+ hydroelectric dams. That would starve them of power to run their centrifuges. If that does not pacify them start testing our nuke bunker busters on their facility, and if that fails make the region around those facilities so radioactive that they cannot be accessed.

As far as Rhodes goes, he should be flown to Iran and dropped, he should only get a parachute if he happens to have one when he is picked up.

Fat fingers, that was payroll.

The centrifuges would not be affected. Like all totalitarian regimes, they will cut back on power for the civilian population first.
That will have the added “benefit” of blaming America for causing power losses for hospitals, baby food factories, etc.

Did everyone in the Obama administration have be able to say “Hillary is a wonderful person.” with a straight face before being hired?

He also focused exclusively on the issue of settlements, and not the other aspects of the resolution, which declares Israelis living anywhere beyond the 1949 armistice line as being illegal. Israeli control of the Western Wall also is illegal under the resolution.

Sorry, this is not a legitimate criticism. In the counterfactual terminology used by the resolution and its supporters, including Rhodes, every Jewish home beyond the green line, even in the heart of a major metropolitan area, is a “settlement”. That’s why every time Jerusalem’s municipal authorities approve construction applications it’s reported as “new settlements”; that makes no sense until you realise that not just each building but each apartment is a separate “settlement”. (There also seems to be no understanding that the Israeli government has no more authority over such applications than the USA president has over similar applications in Washington DC.)