More disgusting and disrespectful behavior at a VA hospital. 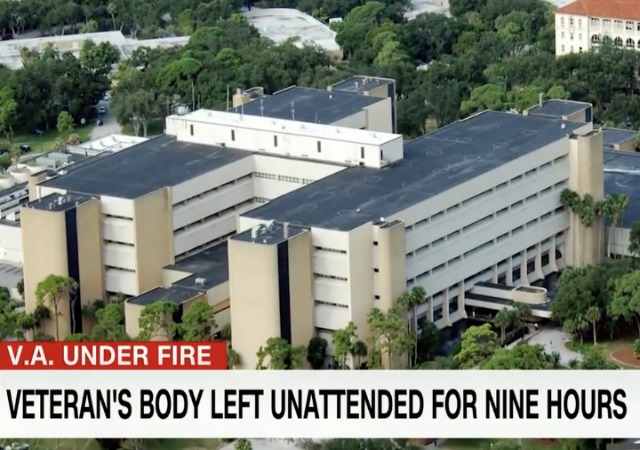 The Bay Pines VA Healthcare System in Tampa Bay, FL, left the dead body of a veteran in an unused for shower for nine hours before transporting it to the morgue. The Tampa Bay Times reported:

Once the veteran died, hospice staff members made direct verbal requests to an individual described as the transporter for the body to be moved to the morgue. The transporter told them to follow proper procedures instead by contacting dispatchers. That request was never made, so those responsible for taking away the body never showed up.

At first, the body was moved to a hallway in the hospice, then to a shower room, where it stayed, unattended, for more than nine hours.

Some hospice staff “demonstrated a lack of concern, attention and respect” for the veteran, the report says.

Once the problem was discovered, efforts to understand how it happened were stalled by failures in oversight and by reports that “falsely documented” the incident, the report says. Staff misrepresented why the problem occurred, attributing it to a communications breakdown that never happened, according to the report.

The investigation found that some of the “hospice staff violated hospital and Veterans Affairs policies by ‘failing to provide appropriate post-mortem care,’ including proper transportation of a body to the morgue, according to the report by the hospital’s Administrative Investigation Board.”

Spokesman Jason Dangel told the publication that the hospital has “ordered retraining and a change in procedures.” He also said the hospital officials took “appropriate personnel action,” but he did not say if the officials fired or disciplined those at fault:

“We feel that we have taken strong, appropriate and expeditious steps to strengthen and improve our existing systems and processes within the unit,” Dangel said. “It is our expectation that each veteran is transported to their final resting place in the timely, respectful and honorable manner. America’s heroes deserve nothing less.”

Unfortunately, cases of horrible treatment at VA hospitals continue to pile up. The VA in Tomah, WI, has come under fore after a dentist may have infected veterans with hepatitis or HIV. The hospital has offered free screenings to the almost 600 veterans at risk.

In August, the family of Marine Jason Simcakoski filed a wrongful death lawsuit against the Tomah VA after he died “from a mixture of drugs that included opioids” in August 2014. He sought treatment for his mental health.

Some veterans at the VA called Houlihan the “candy man” because “of his supposedly easy and widespread distribution of painkillers to his patients.” A report from the Senate Homeland Security and Governmental Affairs Committee stated that Houlihan and Deborah Frasher, his nurse practitioner, “may have been ‘impaired’ themselves during a 2012 interview.

Despicable. A case where the cliched question, “where’s the outrage?” is entirely legit.

Another activity the frequently incompetent and unaccountable federal government should get the hell OUT of. They’ve failed.

Veterans should receive Cadillac-plan vouchers, for life. Private specialty-care clincs will be created where the particular needs exist. Then if they end up also giving crap care they disappear.

The fact that do nothing congress men and women have the best healthcare in the land and veterans are treated worse then live stock is disgusting. Illegals get better health care then Americans who signed over a portion of their lives for their country. This is is Trumps day one job.

All involved will no doubt get their yearly bonus, right on time…

Why do we have a VA, again?

Does Gen. Matt is have a twin? Or perhaps a clone?

I am convinced our major mistake is putting four star generals in charge of the VA.

We ought to put senior enlisted in charge. And not some slick political type who did too many D.C. tours like the MCPON, because they’d be as bad as the generals.