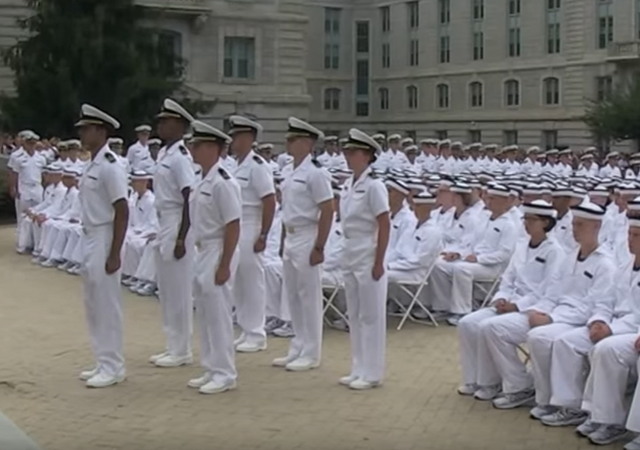 The United States Naval Academy at Annapolis will offer a voluntary training session on transgenderism for midshipmen who wish to become more sensitive to the topic.

This should come as no surprise after the Obama administration has spent eight years letting our military infrastructure crumble as they used our armed forces as a laboratory for experiments in social policy.

The U.S. Naval Academy is bringing in Google employees to provide voluntary “Transgender 101” training to midshipmen this week as part of an ongoing “safe space” training series.

The academy’s Center for Teaching and Learning is holding two events on Friday, one for faculty and staff and another for midshipmen. The hour and a half-long workshops will be hosted by Marnie Florin and Kevin Perry, who launched a similar session at Google in 2015.

Midshipmen and staff who take the training course will get the opportunity to display cards outside their door that show they are allies of the LGBT community.

The course was described in an email circulated by the Naval Academy on Tuesday.

“On Friday, December 9, the Center for Teaching & Leaning welcomes Kevin Perry and Marnie Florin who will be presenting Transgender 101: Gender Identity in the Workplace,” the email said. “Marnie and Kevin have given this workshop at Google offices around the globe to more than 2,500 employees.”

The email explained that Florin is transgender and uses the pronoun “ze.”

A Naval Academy spokesperson told the Washington Free Beacon that the training is voluntary and open to all midshipmen, faculty, and staff. Forty-three midshipmen and 80 faculty members have signed up for the two sessions so far.

Karyn Z. Sproles, PhD, the director of the Center for Teaching and Learning, said there is a demand for “Safe Space” training at the Naval Academy.

Did you ever think we’d reach the point where there was a demand for safe space training in our armed forces?

The Daily Caller has more on the trainer:

Florin’s first attempt at “LGBTQ training” occurred when she was a volunteer for the U.S. Peace Corps in West Africa. After working for the Los Angeles Gay & Lesbian Center, “ze organized and canvassed for gay marriage.”

Florin created her Transgender 101 training “after coming out as gender neutral at Columbia Business School” and realizing that her “peers were a bit confused and had a lot of questions.” “Ze” told the New York Times, “I was really disappointed to find that the L.G.B.T. community at Columbia Business School consisted of so many white, cisgender men” (those comfortable in the sex assigned at birth). Few were transgender or lesbian.”

The training now occurs every year at Columbia, where Florin succeeded in creating “a gender neutral bathroom” and “an option other than male and female” for the admissions application form. While working for Google, she and colleague Kevin Perry developed “Transgender @Google,” which has also been presented to staff at YouTube and Twitter.

I’m guessing that they’ll be offering this nonsense for about say, six more weeks.

Then things will likely change.

Back about 20 years ago, the biggest thing in the Navy was Total Quality Leadership (TQL) which was a royal pain in the ass, but it was everywhere. They were the techniques that Edward Deming used to supercharge the Japanese economy.

Then one day…POOF! It was gone!

Hopefully, all this stuff will die the same death.

TQL is just one of the fads that regularly run thru the military, along with adding supervisory watches to ensure “we never make that mistake again” or that never fruitful search for the perfect Procedure.
How many fire, flooding and/or GQ drills have been replaced by the latest YFGs coming down from the guys w/stars on their collars, over some E-5 not displaying the proper PC attitude?

Any midshipman (er, midship-person) who chooses to waste an elective on this course should rightly be judged not to have discernment.

No wonder the Muslims are laughing at us.

Calling President elect Trump your input is severely needed
at the Naval Academy.

There is no safe space on a ship in battle.

We have The Zumwalt, a destroyer that can’t shoot and has to be towed, but we are sensitive. Go Navy.

Mattis will be a busy man.

In actuality, the course consists of watching the village People’s “In the Navy” song and then they take the rest of the day off.

John Paul Jones is rolling in his sarcophagus under the Academy’s chapel.

And Davy Jones is rolling in his locker.

So freaking crazy…this “Ze” has got to stop.

The military isn’t supposed to be a circus side show. DC has made such a mess of things.

God help us! We don’t need Nancy Boys commanding our ships or flying our aircraft. I’m old Navy and darn proud of it! CVA-38 and CVA-60 Airdale!

What a shame. The 48 Midshipmen who signed up for the seminar should be called Midsissymen from now on.

The military has been a “Social Justice” laboratory for Democrats since Vietnam, with President Obama adding the twist of firing all the non-PC Flag Officers, resulting in some on the right calling for the firing of all of “Obama’s Generals”.
That is a very bad precedent to set & will destroy the U.S. military. It needs to stop now, with Republicans warning Democrat Presidents not to repeat it.

I suspect the demand for this is greatly exaggerated.

Around midday on 21 November 1939 the German battlecruisers Scharnhorst and Gneisenau, escorted by the light cruisers Köln and Leipzig and the destroyers Z 11 / Bernd von Arnim, Z 12 / Erich Giese and Z 20 / Karl Galster, departed Wilhelmshaven for a raid into the North Atlantic, this was to relieve the pressure of the pocket battleship Admiral Graf Spee operating in the South Atlantic. Late on the 21st the escorts left the battlecruisers.

Just after 1500 hours on 23 November the British armed merchant cruiser HMS Rawalpindi (Capt. E.C. Kennedy, (retired), RN) sighted the Scharnhorst. Rawalpindi was part of the British Northern Patrol and was stationed south-east of Iceland in the Iceland-Far?er gap. Captain Kennedy tried to outrun the German ship and reported to the Admiralty that he sighted the German pocket battleship Deutschland, still believed to be operating in the North Atlantic. Just after 1600 hours, Rawalpindi came within range of the Scharnhorst and was quickly reduced to a flaming wreck. During this engagement Scharnhorst was hit by a 6? shell from Rawalpindi causing only light damage. Scharnhorst and Gneisenau together picked up 27 survivors from Rawalpindi. Rawalpindi finally sank around 2000 hours.

The British light cruiser HMS Newcastle (Capt J. Figgins, RN), that was also part of the Northern Patrol, picked up Rawalpindi?s signal and closed the scene. She sighted the Gneisenau but the Germans managed to escape in the fog.

Of the ships of the Denmark strait patrol, the heavy cruisers HMS Suffolk (Capt. J.W. Durnford, RN) and HMS Norfolk (Capt. A.G.B. Wilson, MVO, DSO, RN) were ordered to proceed to the Bill Bailey Bank (to the south-west of the Faroes).

He shook hands with his chief engineer, took on the Germans on both sides, and went down with his ship.

And I an kind of curious why he would do this, if we’re not even willing to get called names.